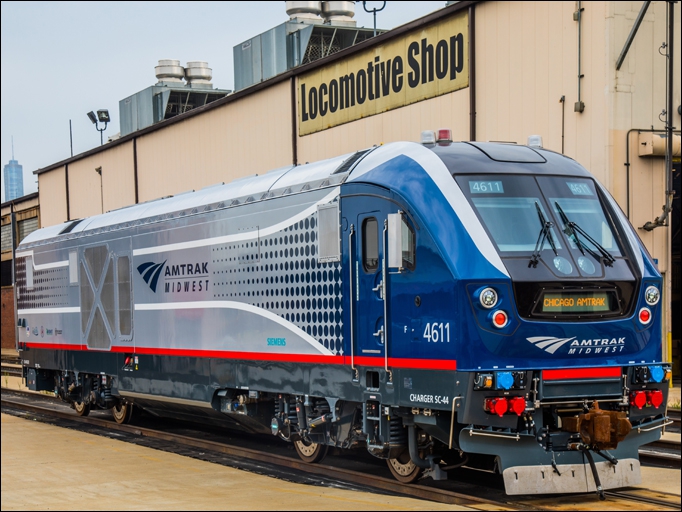 The Siemens SC-44 locos, purchased by a group of five state transportation agencies and maintained by Amtrak, carry the new Amtrak Midwest logo to promote the five-state network of connecting trains.

Siemens is building the Buy America-compliant SC-44 at its facility in Sacramento, to be deployed on state and Amtrak services in Wisconsin, Michigan, Missouri, California and Washington. The Midwest states will receive and own 33 of the 4,400-horsepower locomotives, which were purchased through $216.5 million in federal funding and are being assembled by Siemens in Sacramento.

The Charger is powered by a U.S.-made Cummins 4,400-hp QSK95 diesel engine, with a rated top speed of 125 mph. Siemens touts the Charger as the first higher-speed passenger locomotives to meet Tier IV emissions standards.

Delivery of all 33 locomotives is expected to be completed by the end of 2017. They will operate out of Chicago on Lincoln Service, Illini/Saluki and Illinois Zephyr/Carl Sandburg to and from Downstate Illinois; Hiawatha Service in Illinois and Wisconsin; Wolverine Service/Blue Water/Pere Marquette to and from Michigan, and Missouri River Runner between Kansas City and St. Louis.

“Our individual Amtrak Midwest routes are made even stronger by being part of a network of connecting trains, stations, and reservation systems, which are a product of our state partners working together under the Amtrak umbrella,” said Michael Franke, Amtrak Senior Director – State Contracts. “These locomotives will power the Amtrak Midwest brand, bringing even better service to our customers.”

“We’re building these locomotives in California, for the U.S., bringing the latest technologies to life for riders,” said Armin Kick, Siemens Mobility Vice President for Locomotives. “These are among the nation’s cleanest locomotives and we’re proud to have not only worked closely with Amtrak and the state DOTs to bring these to the Midwest, but also our robust chain of suppliers from across the country.”