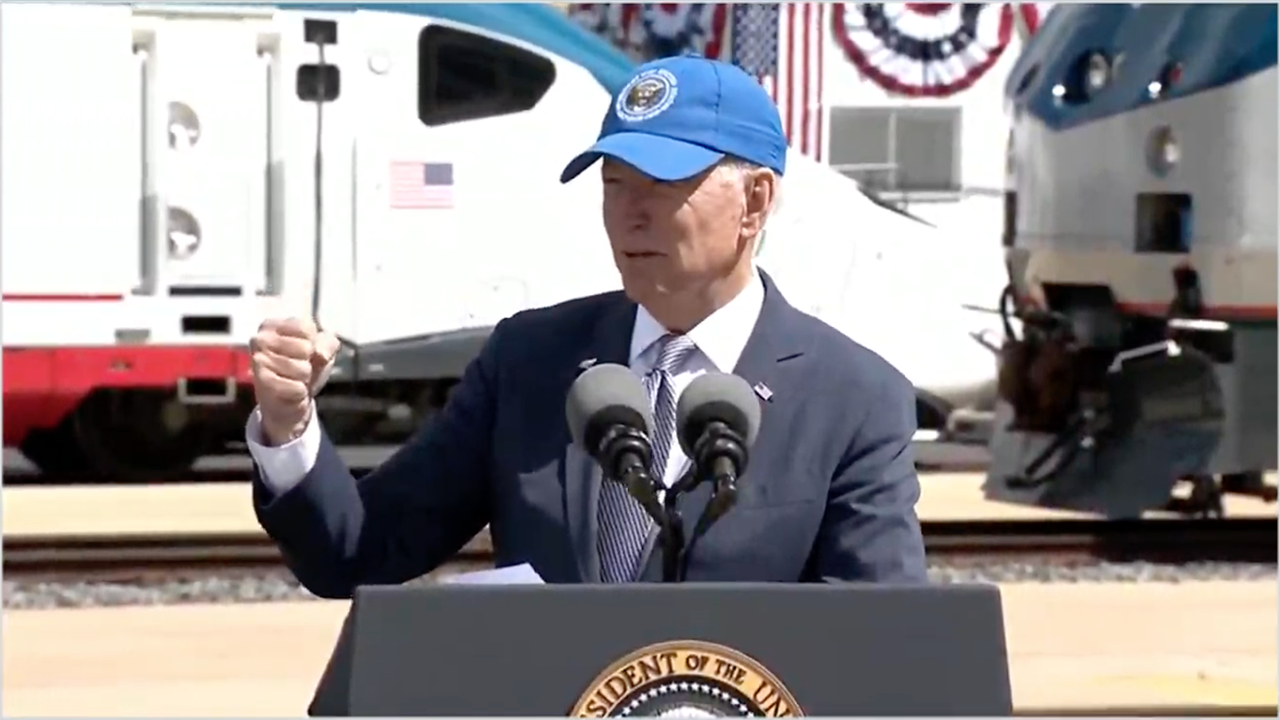 April 30, 2021 was a cool, sunny and windy day in Philadelphia, as President Joe Biden joined Amtrak officials and selected guests to celebrate the 50th Anniversary of the day “America’s Railroad” began operations.

It was a day that many rail passengers at the time never thought would come. Amtrak was founded to relieve the private-sector freight railroads of their obligation to run passenger trains, and most of the trains that left their points of origin on April 30, 1971 did not run the following day. At the time, few expected Amtrak to last very long, except, perhaps only on the Northeast Corridor (NEC). But Americans still wanted the few trains that were left and kept using them, so Amtrak is still with us.

Amtrak is running its lowest-ever level of service at present, but things are looking up. Most long-distance trains will return to daily service about one month from now, and Amtrak is talking about expansion, for the first time in decades.

President Biden was one of Amtrak’s regular riders for more than two-thirds of its history. He commuted daily between Wilmington, Del., and Washington, D.C. throughout his 36-year career in the Senate. That feat earned him the nickname “Amtrak Joe,” and many acknowledge that he will play a key role in Amtrak’s future. He was the guest of honor at the festivities.

The official celebration took place at Philadelphia’s Gray 30th Street Station, an art-deco gem from the era of the Pennsylvania Railroad, built in the 1930s and still in use today, hosting trains from SEPTA and NJ Transit as well as Amtrak.

The live stream began just after 2:30 pm EDT. The event ran for about 45 minutes and started with a video about the decline of passenger trains in the mid-20th century, and the beginning of Amtrak. It cited a growing interest in rail travel and new developments, looking toward rail as “a cornerstone of clean transportation.” It also looked toward expansion of the Amtrak network and paid tribute to Amtrak’s employees, concluding by saying: “The future rides with us.” If one theme dominated the event, it was people; especially with effusive praise for Amtrak’s employees from all crafts, praise that, in this writer’s opinion, is well-deserved.

Amtrak CEO Bill Flynn kicked off the program. He said that, in 1971, “no one could have imagined what lay ahead” and introduced President Biden as “one of Amtrak’s most loyal customers.” He lauded the American Jobs Plan, the Administration’s infrastructure plan, for which Biden was in Philadelphia to promote on a multi-state tour that began in Georgia. He said that Amtrak has the expertise to deliver it, and called on Congress to implement it. Flynn also said that Amtrak plans to expand to 160 new stations and provide many new jobs. He pointed to new equipment for Amtrak, including new Alstom-built Acela trainsets, the prototype of which was located directly behind him. He called the new Moynihan Train Hall in New York City a “world-class station” and touted NEC projects such as Gateway and rebuilding the Baltimore Tunnel. He also called Amtrak “a more-sustainable mode of travel” and noted its environmental benefits.

Flynn said that Amtrak employees “play a vital role” in “making sure America kept moving” during the COVID-19 crisis, and stressed that Amtrak “can provide a safe journey.” He also mentioned his relatives who work on the railroad, including some who work for Amtrak today. He concluded: “While Amtrak may be turning 50, we’re just getting started.”

Flynn introduced Amtrak conductor Blake Weaver, who also praised his fellow employees, and then introduced President Biden. In doing so, he told stories of when then-Senator Biden rode with him and “treated us like family.”

Biden preceded his remarks with a walk along a yard platform past several Amtrak locomotives, including one that sported a special 50th Anniversary livery. He then launched into an old-school political speech; appropriate for an elected official who assumed national office and started commuting on trains operated by Penn Central before Amtrak was formed, and which its founding planners called “Railpax.”

Biden recalled that he saw 30th Street Station a few times when he was coming back from Washington and missed his stop at Wilmington because he had fallen asleep. He said that he had been told that he had taken more than 7,000 trips on Amtrak, and quoted a friend who calculated that he rode 1.55 million miles on Amtrak (about 70% more than this writer has traveled). He also mentioned that, when he was Vice President in 2016, he laid the foundation for Amtrak to purchase the new Acela trainsets that are on their way to enter service on the NEC.

In the tradition of railroaders telling “war stories” about his railroad experiences, Biden recalled how he shared “milestones in my life” with Amtrak employees he knew, including a birthday party when his daughter had made a cake for him. In preparation, he conferred with fellow Senator Bob Dole about when a vote was scheduled, so he knew which trains to catch, in order to be home for the party.

Biden touted the environmental benefits of rail; both Amtrak and freight trains. “For years, I fought efforts to cut funding for Amtrak” he said, also stressing the importance of the NEC. He said it would take seven new lanes of highway at $30 million per lane-mile, to replace the capacity of the NEC and also added that there were 1,200 union jobs being restored at Amtrak. This is a result of most long-distance trains returning to daily service, even though he did not make that connection in his remarks. He endorsed major projects: the Hudson Tunnels, the Baltimore Tunnels, and the Susquehanna River Bridge, along with others that he said would allow for expansion and modernization of passenger-rail service.

Outside the Northeast, Biden mentioned higher-speed rail between such city pairs as Atlanta-Charlotte and Los Angeles-Las Vegas, as well as new destinations like Allentown and Scranton, Pa. (his home town). He said, “Transit is part of the infrastructure” and praised “access to all the infrastructure” as part of winning the global competition. He said, “We’re behind the curve” compared to China, but “we’re on the move again.” His call for more infrastructure: “We have to invest.” He remembered the 2009 high-speed rail program from his early days as Vice President under Barack Obama, and concluded by saying that “the best days for Amtrak and for America are ahead.”

Many of the tributes were aimed not only toward Amtrak generally, but specifically toward its employees. That was true, especially, for remarks from representatives of the railroad unions.

Amtrak Board Chair Tony Coscia spoke from the new Moynihan Train Hall, across the street from Amtrak’s Penn Station in New York. He started by saying, “Amtrak is a lot more than a railroad. It’s not just about trains; it’s about people.” Coscia praised Amtrak as improving mobility and “a way of life.” He also promoted the Gateway Program, a massive infrastructure program with projects ranging from Penn Station Newark to Penn Station New York. Coscia is also Vice Chair of the Gateway Program Development Corp.

In keeping with the “people” theme of the event, Qiana Spain, Chief Human Relations Officer at Amtrak, was next. Aside from joining many other speakers in praising employees, she acknowledged that many people in 1971 did not expect Amtrak to last long.

Amtrak President Stephen Gardner concluded the program. He introduced Amtrak’s new slogan: “The Future Rides with Us,” and said that America needs more passenger trains. He said Amtrak can help America grow and prosper with help from the riders and state partners, and finished by saying, “Come ride into the future with us.”

The “official” anniversary celebration was not Amtrak’s only event today. The new Acela equipment built by Alstom was displayed at Chicago Union Station, on its way east. The equipment was built for service on the NEC, so Chicagoans will not have many opportunities to see it without taking a trip east on the Lake Shore Limited or Capitol Limited.