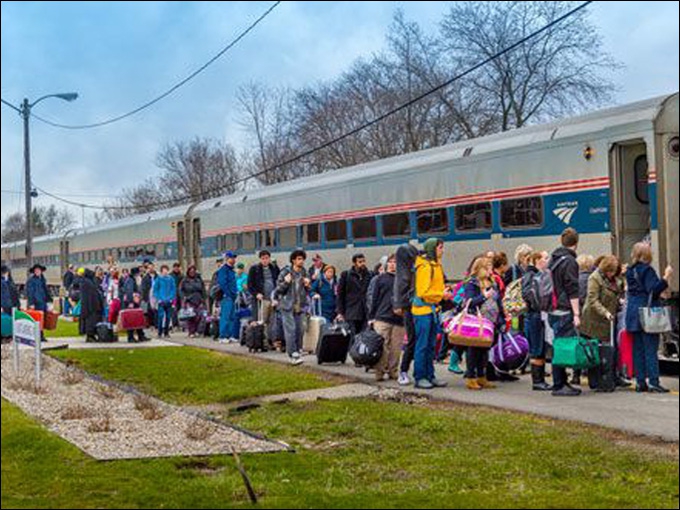 Amtrak says rail infrastructure improvements along its Chicago–Detroit/Pontiac line have been made to enable safe, faster travel along the Michigan passenger and freight corridor.

“Between Porter, Ind., and Dearborn, this rail corridor is now dispatched by Amtrak staff, which ensures the efficient movement of passenger trains,” said Tim Hoeffner, Michigan Department of Transportation (MDOT) Office of Rail director. “We hope this encourages people to consider the train for their next trip, especially with upcoming construction and high traffic volumes along the I-94 corridor.”

The passenger railroad service said riders on the Amtrak Wolverine Service and Chicago–Port Huron Blue Water lines will get to their destinations faster and with fewer delays.

The line’s maximum speed is 110 mph on the Amtrak-owned section between Porter and Kalamazoo, Mich., officials said. The maximum speed on the MDOT-owned portion is set at 79 mph, but it is expected to rise to 110 mph in 2018 along certain segments after Positive Train Control system testing is completed and new locomotives are rolled out.

Amtrak said apart from MDOT’s enhancements, other improvements have been made. A new bridge connection was installed in west Detroit to make a faster connection for trains bound for Detroit, Royal Oak, Troy and Pontiac, Mich.

“At MDOT’s direction, Amtrak work crews have corrected years of deferred maintenance and have taken over dispatching,” said Joe McHugh, Amtrak vice president, State-Supported Services. “We have created the longest railroad segment outside the northeast that is being made ready for even more reliable and faster Amtrak service.”

The passenger railroad service said projects outside of Michigan such as the Englewood Flyover in Chicago also benefit Amtrak trains.

The Englewood Flyover went into service in October 2014, which eliminated the at-grade crossing between the Metra Rock Island Line and NS’ Chicago line that Amtrak notes is its primary entrance into Chicago from the east.