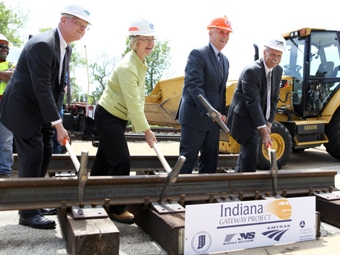 Amtrak, the Federal Railroad Administration, Norfolk Southern, and the Indiana Department of Transportation (INDOT) have embarked on constructing the $71.4 million Indiana Gateway project, which will upgrade the right-of-way between Porter, Ind., and the Illinois state line shared by Amtrak and NS trains.

The Indiana Gateway project will improve seven locations on NS’s Chicago Line and one on the Amtrak Michigan Line. NS will install universal crossovers at five locations and construct a third main line track at three locations. Amtrak will build a new passing siding near Porter Interlocking, where NS, Amtrak, and two CSX lines intersect.

Funded under ARRA (American Recovery and Reinvestment Act), the Indiana Gateway project will complement rail improvements in neighboring states, such as the Englewood Flyover CREATE project in Chicago. It will improve Amtrak passenger rail service for several routes that terminate in Michigan, Boston, New York, and Washington, D.C., such as the Lake Shore Limited and Capitol Limited. With design nearing completion, construction hits full stride this spring and is expected to be completed in 2016.

“Fourteen daily Amtrak trains every day share these tracks with dozens of Norfolk Southern freight trains, all with time-sensitive customers,” said Amtrak State Government Contracts Chief Michael Franke. “The Indiana Gateway Project will improve some of the busiest tracks in the country, adding capacity and increasing the fluidity of all trains.”

“Norfolk Southern prides itself on a tradition of partnering with other transportation providers, including Amtrak,” said NS Assistant Vice President for Operation Planning Jeff Harris. “The Indiana Gateway project provides important infrastructure improvements that, when completed, should allow for more efficient movement of passenger and freight trains through this vital rail corridor.”

“This project significantly strengthens the Midwest Regional Rail Network, eliminates chokepoints, and creates an environment where intercity passenger trains and freight service can operate fluidly without prolonged delays,” said Deputy Federal Railroad Administrator Karen Hedlund. “The Administration’s GROW AMERICA Act will provide predictable, dedicated funding for rail projects like Indiana Gateway throughout the country, including $19 billion for rail safety and development over the next four years.”

“When it comes to the three guiding principles of Indiana infrastructure—taking care of what we have, finishing what we started, and planning for the future—the Indiana Gateway project is a triple threat that underscores the importance of a multi-modal transportation system capable of efficiently moving both people and freight,” said Indiana Governor Mike Pence. “By reducing congestion where Lake Michigan funnels rail traffic east of Chicago and improving the flow of goods and people by rail, the Indiana Gateway has the potential to grow Northwest Indiana’s reputation as a manufacturing and distribution center and positively impact economic development in the Region.”