The Toronto Transit Commission has awarded Alstom Transport a C$50 million (US$42.5 million) contract for an overlay CBTC (communications-based train control) system with ATC (automatic train control) on the 19-mile Yonge University Spadina Subway Line. The line runs from Finch to Downsview, and includes yards at Wilson and Downsview.

The contract, plus options and alternatives, includes the design and supply of equipment for the train control upgrade of the existing system. Alstom will provide its Urbalis train control and telecommunications technology. The new ATC system is scheduled to start revenue service in 2012. Service will not be interrupted during the upgrade of the system.

“Urbalis allows for more efficient operation and makes it possible to increase train frequency and transport capacity,” Alstom said. “The system is capable of providing headway of up 90 seconds or better under normal operating conditions. This new contract, a premiere in North America, builds on our trend-setting achievements in the field of CBTC renovations and upgrades, as exemplified in the Beijing Line 2 renovation project, completed in two years without interruption of service, in time for the Beijing 2008 Olympics. Alstom delivered Singapore’s driverless North-East Line in 2003, followed by two additional new driverless lines in 2008 in Lausanne (m2) and Beijing (Airport Link), and is currently working to deliver new CBTC lines in Singapore (Circle Line, driverless), Malaga (Lines 1 and 2), Istanbul (Marmaray Line), and Shanghai (Line 10, driverless), as well as full CBTC renovations in Milan (Line 1) and São Paulo (Lines 1, 2, and 3). The Urbalis train signaling system has also been installed in other major cities such as Delhi, Santiago, Cairo, Seoul, and Madrid.” 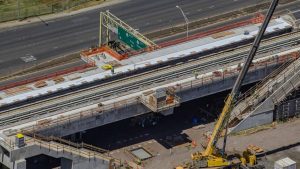