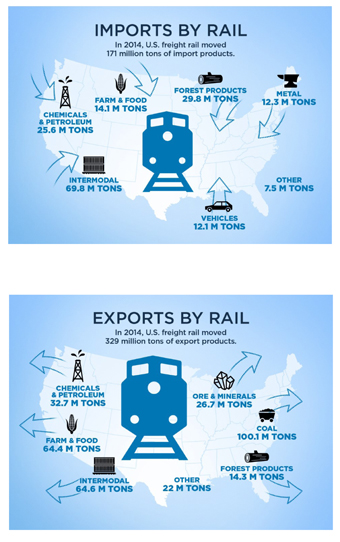 I have stressed many times in this blog, and in my monthly magazine columns—at times in harsh terms that may have offended some people who, for reasons I can’t quite figure out, took my remarks personally—that the Trump Administration’s extremely nationalistic ideology, if it morphs into law, will critically injure the railroads and the railroad supply community.

Well folks, you can take that assessment to the bank, hopefully not to make a withdrawal on your cash reserves because your business is drying up. The Association of American Railroads today (March 29, 2017) released an assessment, based upon cold, hard numbers, of international trade’s impact on the freight railroad industry. This report (downloadable at the link below) publicly confirms what many of us have known for years: A significant amount of railroad traffic and revenue is directly attributable to international trade. As the AAR puts it, railroads and international trade “are deeply connected.”

Just how deep? The AAR has determined that “at least 42% of rail carloads and intermodal units, and more than 35% of annual rail revenue, are directly associated with international trade.” Furthermore, “Approximately 50,000 domestic rail jobs, accounting for more than $5.5 billion in annual wages and benefits, depend directly on international trade. If rail traffic indirectly associated with trade was included, the figures would be notably higher.”

“These numbers validate our view that U.S. policymakers should proceed with caution in their quest to reverse some impacts of globalization,” says AAR President and CEO Ed Hamberger. “Efforts that curtail overall trade would threaten thousands of U.S. freight rail jobs that depend on it and limit essential railroad revenues used to modernize railroad infrastructure throughout North America. For a highly capital-intensive industry that has spent $26 billion annually in recent years, private investment is the lifeblood of a freight rail sector that must devote massive sums to safely, efficiently and affordably deliver goods across the economy. Upending the ability of railroads to do so by undermining free trade agreements that have done far more good than harm would have far reaching effects.”

Ed, as always, is highly skilled at diplomacy. I probably would say something like, “Are you people out of your minds? Put a sock in it! You’re killing us!”

I’ll play Joe Friday and tell you more cold, hard facts—The Truth, as The New York Times defines it—provided by Ed Hamberger and the people who know what they’re talking about at the AAR—who did not pull numbers out of thin air (italicized emphasis mine):

“The report looked at a host of rail movements, analyzing data from the 2014 Surface Transportation Board (STB) Waybill Sample—the most recent data available at the time of the analysis—other government data, information from U.S. ports and Google Earth, among others. The Waybill Sample contains data from a stratified sample of waybills submitted each year by freight railroads to the STB. Each waybill contains, among other things, information on the origin and destination of the shipment and the volume and type of product moved.

“The scope of operations and reach into the U.S. economy discovered through the analysis was stark. In 2014, there were 329 million tons of exports handled, nearly double the still-sizeable 171 million tons of imports moved by rail.

“Rail traffic associated with trade included movements of coal for export out of ports in Maryland, Virginia, the Gulf Coast and the Great Lakes; paper and forest products imported from Canada into the Midwest, as well as paper products exported from the Southern U.S; imports and exports of Canadian and Mexican automotive products to and from auto factories in dozens of U.S. states; containers of consumer goods from Asia coming ashore in Los Angeles, Long Beach, Oakland, Tacoma, Savannah, Norfolk, and Newark; plastics shipped by rail from Texas and Louisiana to the East and West Coasts for export to Europe and Asia; iron ore mined in Minnesota and shipped by rail to Great Lakes ports; and grain grown in the Midwest and carried by rail to the Pacific Northwest and the Gulf Coast for export.

“With ample discussions in Washington policy circles today on the role of trade, imports vs. exports and manufacturing, the data provide a reminder that today’s global economy is firmly established and cannot be easily undone with rushed policy modifications. Doing so could have damaging and counterproductive effects on American workers and various industries—including a freight rail network that serves nearly every industrial, wholesale, retail and resource based sector of the economy.”

This is nothing new. Railroads have been handling trade-related business since long before Railway Age first appeared in print. That was 1856.

The AAR’s report doesn’t provide specific numbers for suppliers, but it does point to “other significant job impacts” such as “suppliers to railroads of products needed to support international rail movements” and “secondary job impacts derived from the expenditures of rail and port employees and their suppliers.”

Let’s take that one step further. There are many domestic suppliers and consultants that conduct significant amounts of business outside the U.S., in places like Mexico and Canada (the two countries that, with the U.S., form the North American Free Trade Agreement, which the President would like to dismantle), China, Australia, India, Western Europe, Eastern Europe, Russia (yes, that country, a news fixture these days), Africa, the Middle East, South America, etc., etc. To name a few: Greenbrier. Wabtec. L.B. Foster. RailWorks. General Electric. EMD. Trinity. Harsco. Herzog. Loram. AECOM. STV. Parsons. HDR. Need I go on?

Companies like these provide U.S. railroad industry expertise, equipment and technology all over the world, and as we well know, the U.S. freight rail industry (and to be fair, Canada’s as well) is the standard of the world. If trade restrictions and tariffs like President Trump and his advisors have been pushing are actually enacted, how welcoming do you think these countries are going to be to importing what we have to offer?

You’re right: Not very much—if at all. Don’t be surprised when, after investing a lot of money and time and talent, we’re shown the door. “You Ugly Americans don’t want our goods? Guess what—we don’t need you either.”

What happens when it becomes too expensive for these companies to do business in the U.S.? You’re right: They pack up and leave.

The example I just gave applies largely to passenger rail, which we as a nation must continue to develop for economic and environmental reasons. The AAR is talking about freight rail, but let’s remember that the rail industry is one industry. One ton of freight moves almost 500 miles on one gallon of diesel fuel. One fully-loaded ten-car commuter train replaces about 1,000 single-occupant automobiles. It’s all the same.

One industry. One that, now more than ever, must speak with a single voice. The AAR has planted the seeds of what I believe should be a grassroots movement to force the Trump Administration and our elected representatives at the national, state and local levels to recognize that policies promoting extremist nationalism and protectionism aren’t good for the nation and really don’t protect anybody.

So let’s join forces—AAR, ASLRRA, APTA, RSI, RSSI, REMSA, AREMA, ATA (yes, truckers are important—think intermodal), NARS, etc., and do all we can to put a lid on a can of worms full of destructive national policies that will damage everyone. 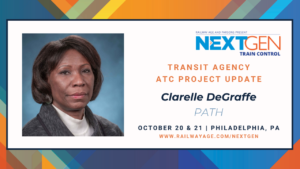