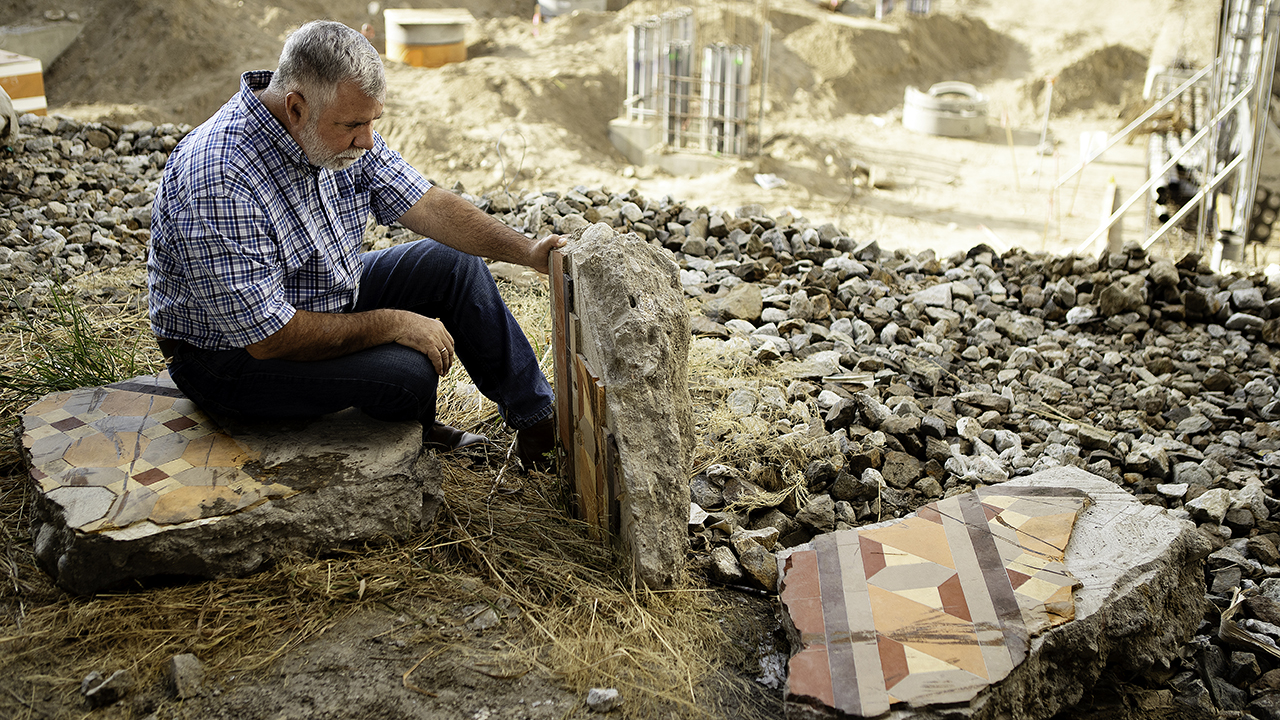 “The challenge of history is to recover the past and introduce it to the present,” remarked historian David Thelen. He’s right. But that challenge ramps up by an order of magnitude when history presents itself in the middle of a multifaceted, essential, constant-operation infrastructure project that must follow all cultural resources mitigation measures as defined by the California Environmental Quality Act.

“Everyone is trained to stop if they find something,” explains Metro Deputy Executive Officer and Metro Division 20 Portal Widening Project Manager Matt Gallagher. “And any time we’re excavating, we have a team of archeologists and paleontologists observing for potential findings. And in this particular area, findings can include Hispanic, Asian and Native American cultural artifacts. So, those cultural concerns are represented on the archeo-paleo team as well. If and/or when something is found, the team is trained to make a decision as to whether the find is significant and what protocols need to be followed.”

“Typically, the work stops until we can quantify the quality of the historical value of what’s found,” adds Roger Miramontes, a senior vice president with Anser Advisory, the project prime consultant providing construction management support services for Metro. “Often, it’s very quick, anywhere from a couple of hours to a day at the most. But we must always respect and set aside anything of historical value. In truth, when we do come across something historical, everyone wants to stop and look. It’s pretty exciting, especially if you’re a history buff, which I am.”

Jackie Patterson is, too. So much so, in fact, that she refers to historic finds as “buried treasure.” Co-founder and vice president of Zephyr UAS, a rail subconsultant providing construction management services to Anser Advisory, Patterson is a veteran rail expert who has encountered historic finds on numerous projects. “We immediately receive a briefing from the onsite archeo-paleo team on what was found. They tell us its significance and what we need to know to preserve it. And we document everything. We even put a drone in the air to document the location of the finding from a fresh aerial view, which in this case the archeo-paleo team used as part of their documentation. We do whatever we can to enhance the findings and preservation of the find, and that’s exactly what we’re supposed to do. But that’s just part of our obligation. We also must make sure that the project continues on schedule, in this case that meant construction operations could not be interrupted for a long period of time while we made the improvements and preserved history. It can be a tricky balance sometimes.”

But it’s a balance that must be struck. And in that regard, this particular project presents considerable challenges.

What the Fuss Is All About

The Division 20 Portal Widening and Turnback Facility (Div20) sounds nominally mundane. It’s not. The existing yard, known as Metro’s Division 20, currently services the existing rail vehicle fleet for Metro Red (“B” Line) and Purple (“D” Line) Lines. However, with the expansion of the Purple Line from its current terminus at Wilshire/Western in Koreatown to West Los Angeles and the commitment to reduce headways out of Union Station to a train every 90 seconds, the existing facility expansion will be transformative: adding two new storage yards to accommodate the extra trains, expanding the existing portal from two to four tracks, and providing three new turnback tracks. But these changes will deliver meaningful results.

The new Div20 will allow for faster switching, and greater system safety and reliability. In addition, this project also modifies the 100+-year old landmark First Street Bridge, another historic-preservation challenge to make room for additional tracks under the structure. By the time the project is complete, it will add 6.2 miles of track and more than 16 miles of ductbanks (enough to run a line from Union Station to the Santa Monica Pier) in a footprint of no more than 1.5 miles long by one-quarter-mile wide.

Set in existing rail yards, the project site is bounded by the Los Angeles River to the east, Santa Fe Avenue to the west, Ducommun Street to the north, and the 6th Street Bridge to the south. It also pushes the existing rail yard boundaries west and north. But what the project team quickly learned was that Metro was not the first to value this location for its rail utility.

The Challenge of Buried Treasure

“While demolishing an old maintenance building on the site, the excavators hit an interesting surface. This surface turned out to be remnants of the original terrazzo tile floor mosaic from the old La Grande Station walkways and lobby. The mosaic was about 30 feet in diameter,” reveals Patterson. “This was the Santa Fe Railway’s main station in the late 1800s/early 1900s. And it was beautiful! It had Moorish-inspired architecture and was used in many movies from the time. It really was an absolutely wonderful way to enter Los Angeles and its beauty and majesty shaped people’s impressions of the city.”

The La Grande Station served Los Angeles from July 29, 1893 until the current Union Station opened in 1939. Built of red sandstone and brick, the La Grande Station featured turquoise domes, turrets, and chimneys, as well as stunningly beautiful mosaic floors. In a LA Downtown News article (“Tracking the Old Trains,” 1/16/12), Greg Fischer describes the station as an “architectural delight” and a “Victorian concoction” where “the front of the station was a mass of horses, buggies, buckboards, streetcars, telegraph wires, and telephone poles.” Though many today may question the use of brick in an earthquake zone, its use was an initial response to a rash of fires that had destroyed many earlier wooden depots. Sadly, brick proved a poor choice, as a 1933 earthquake heavily damaged the station, including its signature dome, which had to be demolished immediately.

Unquestionably a pivotal part of LA history—particularly its transportation legacy—Patterson and the team knew the importance of its preservation. Working closely with the archeo-paleo team, sections of the mosaic floors were carefully removed and preserved. Matt Gallagher describes the next steps.

“Technically, Metro owns all of the artifacts, but we understand that some may have greater cultural value. So, once the artifacts are removed, then a decision as to their disposition will be made about them. Should they be donated to a museum? Are there any cultural sensitivity to the artifacts? While our environmental department has agreements with local colleges and museums, the process includes a number of different Metro departments to make sure we’re covering all bases and handling the artifacts properly.”

But the finds didn’t stop with just the mosaics.

“Away from the station we also found burn pits, where people used to burn their trash,” add Patterson. “There were layers and layers of artifacts like bottles, etc. And at the Metro Center Street project area we also found a cast-iron Los Angeles Gas and Electric sign, the utility that predated the LA Department of Water and Power. When we were demolishing the property for the north storage facility location we also found a bone, which always makes everyone a little nervous due to the fact that this area is also sensitive to pre-historic Native Americans. But the archeo-paleo team and the Native American monitors were on it instantly and determined that it was bovine and therefore not significant. And that’s exactly why their presence is critical on any project where there is significant excavation in a historical area.

“With the archeo-paleo team, we discovered very important artifacts for the transportation history of Los Angeles. Working closely with Matt, Roger, and the team, we were able to preserve and protect that history without affecting the project schedule significantly. But no two situations are the same. That’s why it’s so important to have procedures in place that can address every contingency including discovering historical artifacts. In all likelihood, that should be it for this project. We’ve pretty much found everything we’re going to find, as the rest of the existing yard is pretty disturbed ground. But you never know …”

Gallagher adds, “Look, these measures are required by law and regulation, but we never try to skirt the rules. We adhere not only to the letter of the law, but to the spirit of it as well. We understand and appreciate the value of doing the right thing here. As Roger and Jackie said, we all love and respect history as much as we do transportation.”

“The challenge of history is to recover the past and introduce it to the present.” Naturally, that becomes inordinately more difficult when it’s on the construction site of a major infrastructure project. But Metro’s Matt Gallagher, Anser Advisory’s Roger Miramontes, and Zephyr UAS’s Jackie Patterson and their teams make sure that that challenge is overcome deftly so that they can introduce Los Angeles to its past, while keeping it moving toward its future.

Arthur Schurr is a New York-based freelance writer who reports on transportation infrastructure.