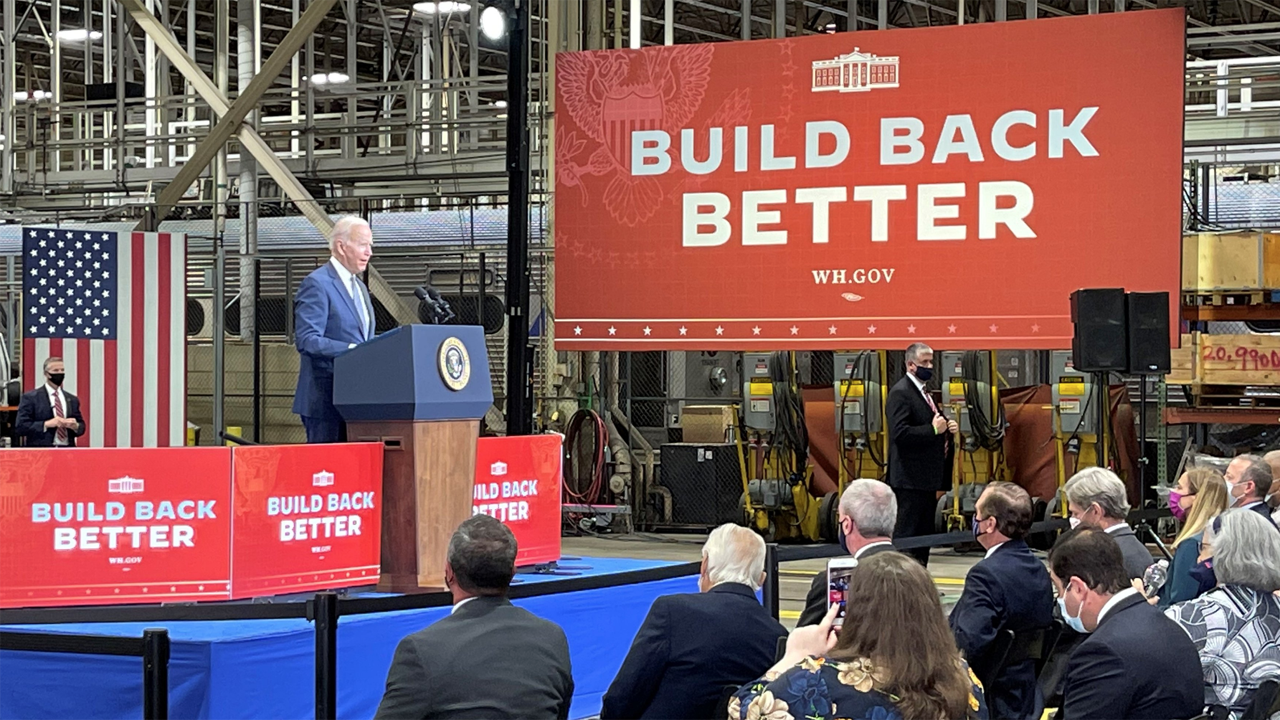 Alongside federal, state and local officials, President Biden participated in a groundbreaking ceremony that followed the New Jersey Transit Board of Directors’ approval earlier this month of a $1.56 billion contract with Skanska/Traylor Bros Joint Venture for construction of the bridge.

“The infrastructure bill is about rebuilding the arteries of America, and the Portal Bridge Project is showing why investments like this are so important,” President Biden said. “When the Portal Bridge was built, it was state-of-the-art, and it was, 110 years ago. Today, it’s been called something different, a chokepoint, a bottleneck, an Achilles’ Heel to the Northeast Corridor. Since the Portal Bridge was built, it has become the busiest rail span in the entire Western Hemisphere. Today, we are moving forward on a new bridge so that it will be higher over the water, so it won’t need to open and close, and allow us to increase speed, safety, efficiency and capacity. It’s going to make life a lot better for New Jersey’s commuters.”

Portal North—part of the massive Gateway Program, which will eventually double rail capacity between Newark, N.J., and New York—will replace the Portal Bridge, a mechanical-trouble-plagued swing bridge built by the Pennsylvania Railroad in 1910. The bridge crosses the Hackensack River in the New Jersey Meadowlands.

The $1.888 billion Portal North project, which stretches 2.44 miles of the Northeast Corridor line, includes construction of retaining walls, deep foundations, concrete piers, structural steel bridge spans, rail systems, demolition of the existing bridge, and related incidental works. The new bridge will be a two-track, high-level, fixed-span bridge that will rise 50 feet over the Hackensack River. Once construction begins, work is anticipated to take approximately five and a half years.

The project is being funded by the U.S. Department of Transportation, New Jersey Transit and Amtrak. In January, NJ Transit received a Full Funding Grant Agreement, securing $766.5 million in Federal Transit Administration funding to support construction. The Federal Highway Administration is providing some $57 million for the project. NJ Transit and Amtrak will provide the balance of funding, about $977 million, and share operations and maintenance.

“Today [Oct. 25] is a great day for New Jersey and the entirety of the Northeast Corridor,” New Jersey Gov. Phil Murphy said. “This momentous groundbreaking is the culmination of years of hard work, planning and relentless lobbying undertaken by our Administration, our federal delegation, and so many dedicated partners across government. The Portal North Bridge is the beginning of the largest critical infrastructure project in our nation, and with President Biden’s leadership, we are embarking on the path to completion of the Gateway Program.”

“Replacing the Portal North Bridge is a significant milestone for the region’s efforts to improve and expand rail service,” New York Gov. Kathy Hochul said. “In addition to the Gateway Hudson Tunnel project, this bridge will provide safe and reliable access to New York and will help support our economic recovery.”

“This groundbreaking represents a monumental step forward towards improving the overall customer experience and quality of life of the many Northeast Corridor riders that rely on NJ Transit and Amtrak to take them safely to their destinations each day,” New Jersey Department of Transportation Commissioner and NJ Transit Board Chair Diane Gutierrez-Scaccetti said.

“Under Governor Murphy’s leadership, NJ Transit has been laser-focused on advancing this project of national significance, and today, we proudly begin construction to replace this critical link between New Jersey and New York, which will improve service reliability for the millions of NJ Transit and Amtrak customers who depend it on every year,” NJ Transit President and CEO Kevin S. Corbett said.

“Amtrak is pleased to partner with NJ Transit on this important project and thanks Gov. Murphy, Sens. Booker and Menendez, and the New Jersey Congressional delegation for their unwavering support of the project over the years,” Amtrak Board Chairman and Gateway Development Commission Vice-Chair Tony Coscia said. “Replacing a century-old moveable bridge with a modern one that does not have to open and close will make life better for hundreds of thousands of Amtrak and NJ TRANSIT riders on the Northeast Corridor while putting Americans to work building 21st century infrastructure we can be proud of.”