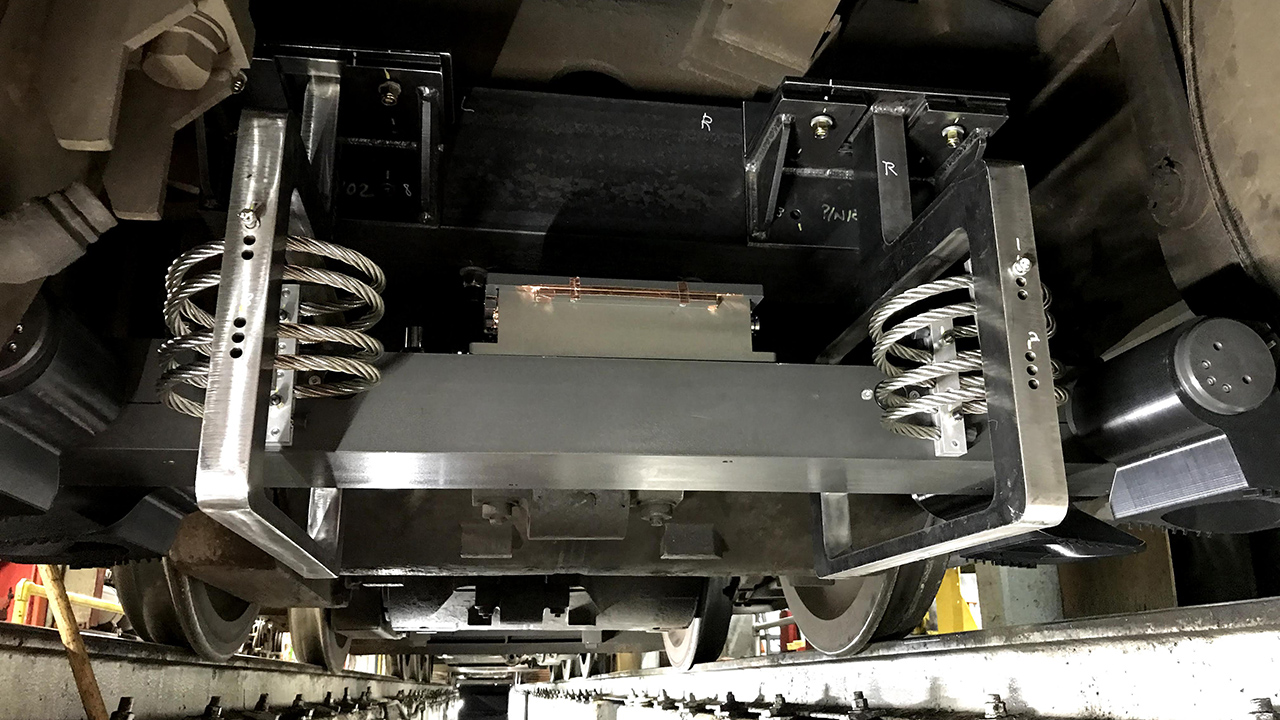 From track geometry to rail flaw detection, suppliers are providing the equipment and services railroads need to gather measurement data and identify flaws and internal defects. Today’s technologies are not only more precise, but also more productive, helping freight and passenger railroads plan and conduct programmed maintenance—and take action before failures and service disruptions can occur, so they can focus on serving their customers.

Following is a roundup of suppliers who shared their latest offerings and market outlooks with Railway Age.

“Freight and passenger railways have identified autonomous track geometry measurement as a key part of their track inspection future, as it is able to achieve the same quality measurements of a manned system, but at a fraction of the cost,” says Matthew Dick, Deputy Division Manager-Commercial Business Operations, who adds that ENSCO’s autonomous system helps railroads survey more miles per year. “Class I railroad customers in particular are starting to survey 100,000-plus miles per year, which is approximately five times more than a manned vehicle.”

The company is currently delivering its first autonomous joint bar imaging systems to two Class I’s. “These systems will enable detection of cracked joint bars and missing bolts, which are a key inspection requirement,” Dick tells Railway Age. ENSCO, he adds, is also in the process of delivering the first autonomous track component imaging system to a transit company in support of the Federal Transit Administration. It will allow for the automated inspection of fasteners and ties, he says.

Maintaining rail health is a constant challenge for the railroads, Herzog tells Railway Age. Finding defects before they become a problem requires repeat assessment and making the most of available track time.

While rail testing was down over the past year due to reduced freight and commuter traffic, Herzog says, the company has seen an uptick in the use of Continuous Testing (CT). CT fits into freight railroads’ tight work windows. “With CT, the railroads increase the miles of track inspected across the network and reduce delays associated with routine stop/start inspections,” the supplier explains.

Recently, Herzog added complementary services to its ultrasonic CT vehicles with the aim of gathering more data in one pass. “Now that we are capturing data for geometry and joint bar detection using visual imaging, LIDAR and new GPS/IMU systems, Herzog will be in the unique position of being able to collect and process multiple variates for cross correlation,” Herzog Services, Inc., President Troy Elbert reports. “Our goal is to develop intelligent algorithms that give our customers an up-to-date analysis on rail infrastructure health.”

By supplying more detailed network information, railroads can move toward scheduled, preventative maintenance rather than focusing on unplanned repairs or replacement, which slows down revenue service operations.

“Our dataset is robust, and we are excited about where our new inspection initiatives are headed,” Elbert says. “We have seen early success in achieving real-time defect analysis using artificial intelligence/neural network technologies.”

Holland LP has developed a locomotive-based autonomous system to provide full track geometry measurement. Truck-mounted, the system began pilot testing last summer at a Class I railroad. It can cover 500-600 miles of main line track per day or measure more than 100,000 miles per year, according to Sabri Cakdi, Director of Product Development.

“We think this is a great alternative to the boxcar autonomous system,” Cakdi says. Unlike the boxcar system, which requires the car to be outfitted with solar panels, backup batteries and power generators, for instance, Holland’s new system takes advantage of the locomotive’s power as well as its tachometer and GPS information. “We don’t make any structural changes to the locomotive—there’s no welding or drilling,” Cakdi adds.

Holland has been testing its performance against the Class I railroad’s conventional inspection car, and both have found the same defects, Cakdi says. “The locomotive system readings are just slightly higher because the weight is the heaviest,” he notes. The Class I was interested in how the track behaves under a locomotive. “Our preliminary conclusion is that it is slightly stressed and deflected more than with conventional inspection cars,” Cakdi says. “As the weight goes up, the track deflects more. That allows us to find defects that may not be found otherwise.”

While Holland’s geometry system is positioned in front of a traction motor, it was designed not to be affected by electromagnetic interference, Cakdi reports. In addition, the system is reliable, he says, and has not needed any maintenance since it was installed.

With track time at a premium, customers “prefer multiple inspections in one pass,” Cakdi says. Railroads are not only looking for defects, but also determining trends so they can predict potential failures and rail life, he adds.

Among Holland’s other new products is the Gage Inspector, a portable, one-person-operated unit that can be moved between hi-rail vehicles in minutes, Cakdi says. The low-power system weighs 50 pounds and is made in the United States.

Additionally, Holland is working on its next-generation geometry system, Argus 2.0, which is slated for launch before the end of the year. The current system was designed for freight service, with a speed limit of 90 mph. The new system will be able to operate at higher speeds for higher speed passenger rail service, Cakdi says.

On the research and development side, Holland is focused on machine learning. “We believe that systems will be fully autonomous,” Cakdi says. “And that means algorithms will determine if a measurement is correct or not. At the moment, we have the baseline for it, but it still needs an experienced operator’s look, a final quality assurance look.”

“The fundamental indicator of track condition is track geometry, and in most cases, the condition defining the need for track quality improvement is poorly-performing track geometry,” says Loram Technologies Inc. “When we think of the geometry of the track, we think of the lines, curves and angles that make-up the track’s position along the right-of-way, and we talk of such things as vertical profile, horizontal alignment, cross-level and gage.”

Track geometry data from a measurement vehicle “provide an objective indication of the roughness of track, and by aligning and comparing track geometry roughness over time, one can quantify the performance and deterioration rate of the track,” says Loram. “For example, by analyzing the vertical profile geometry channel from successive inspection runs over time, the performance of the track’s ballast and drainage condition can be evaluated, since vertical profile is the geometry parameter most influenced by track substructure condition.”

Integrating performance information derived from track geometry data with condition information “provides insight into the root-cause of track performance issues,” notes Loram. “From a track substructure perspective, Ground Penetrating Radar (GPR) data provides continuous measurement of the condition of track substructure layers by providing information on the fouling condition of the ballast, the subsurface moisture condition, and the layer thickness and configuration of the bottom of ballast layer and the top of subgrade. Additional right-of-way information from lidar scanning, precisely aligned to GPR and track geometry information, provides an even more complete picture of the health of the line. Integrating disparate information and providing an intuitive visualization of the combined information, is very useful for track maintenance management and renewal planning.”

Wabtec acquired Nordco earlier this year. “It gives us the opportunity to leverage the expertise within the Wabtec family and the technologies that they’ve developed over the years,” says Bruce Boczkiewicz, Nordco Vice President, who notes that the combination will also speed product development.

Safety, productivity and equipment reliability are key for railroads, notes Boczkiewicz. Over the past few years, Nordco has been working on making rail flaw detection easier for operators, he tells Railway Age. “We continuously look at ways to automate processes.” Getting the same amount (or more) work done in a shorter amount of time is important. Ultrasonics is the basis for Nordco’s rail flaw detection system.

Data, too, is important to help railroads understand not only the operations being performed, but also how machines are operating, and when they will need maintenance, fuel or battery recharging, for instance, Boczkiewicz says.

Among the company’s newest products are the PCT (Production Chase Tamper) and the TPX (Tie Exchanger), which is expected to be in full production in 2022.

What’s next? The company is keeping an eye on the market to “see what’s the best way to deploy products going forward,” Boczkiewicz reports.

Today’s customers want precise, cost-effective solutions to safely and effectively manage their networks, Plasser American tells Railway Age, and increasing measurement frequency is a must. “This is driving the need to measure track from vehicles besides geometry cars,” Plasser says, noting that autonomous track geometry measurement during revenue service is among the ways to achieve this.

Customers are also increasingly interested in high-resolution video. Plasser now offers a 360-degree camera that can record an entire rail corridor. Its Digital Solutions Business Unit has also partnered with the Plasser Machine Group to upgrade the IMU-based geometry systems on tampers, allowing geometry car-level data to be sent to the cloud for back-end analysis and work validation.

Plasser’s R&D efforts are focused on autonomous systems as well as lower-cost solutions that can be mounted on a variety of revenue service trains or track geometry equipment.

“Our customers are looking for multi-functional and autonomous railway inspection solutions to replace single-purpose, manned measurement and imaging systems,” according to Railmetrics. “We are seeing clients integrate our LRAIL [Laser Rail Inspection System] technology into their testing platforms as a way of providing an all-in-one, single-pass inspection solution that does not require onboard staff and that provides 3D imaging and inspection of their fasteners, crossties, ballast, joints, tie plates and more.”

One of the company’s current R&D projects is a collaborative effort with RailTEC at the University of Illinois. Funded by the Federal Railroad Administration, the project’s aim is to develop and field deploy AI (artificial intelligence)-based Change Detection technology. “This new approach to railway inspection shifts the focus from late-stage defect finding to the early detection of subtle changes in track conditions, which will impact future safety if left unchecked,” according to Railmetrics.

RailWorks, which offers track geometry services via its Maintenance of Way (MOW) division, has seen a steady uptick in demand across customers in North America, according to the company. Combined, its contact-based testing systems and laser-profile gauge services “provide an accurate snapshot of the state of the rail,” RT Swindall, Vice President, MOW, tells Railway Age.

We work hand-in-hand with our customers to customize a package of MOW services to help enable continuous and smooth rail operations,” Swindall says.