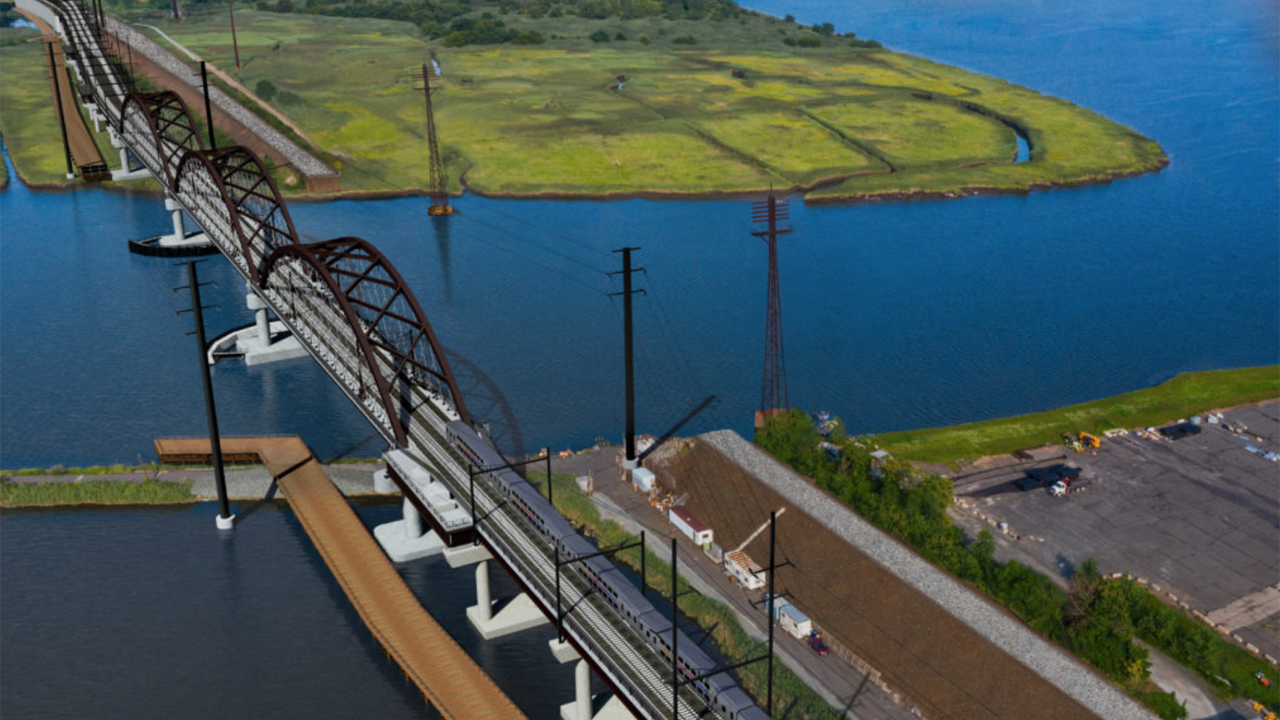 New Jersey Transit has issued a “Notice to Proceed” to Skanska/Traylor Bros PNB Joint Venture (STJV) for construction of Portal North Bridge, which is slated to take approximately five and a half years to complete.

Portal North—part of the massive Gateway Program, which will eventually double rail capacity between Newark, N.J., and New York—will replace a mechanical-trouble-plagued swing bridge built by Pennsylvania Railroad in 1910. The 110-year-old Portal Bridge, according to NJ Transit, is an “enduring source of major service disruptions” for its customers and Amtrak’s traveling on the Northeast Corridor (NEC).

The NJ Transit Board of Directors in October 2021 approved a $1.56 billion contract with STJV to build the new bridge to improve service and capacity; the move was celebrated later in the month with an official groundbreaking ceremony that President Joe Biden attended along with federal, state and local officials.

The $1.888 billion Portal North project, which spans 2.44 miles of NEC line, includes construction of retaining walls, deep foundations, concrete piers, structural steel bridge spans, rail systems, demolition of the existing bridge, and related incidental works. The new bridge will be a two-track, high-level, fixed-span bridge that will rise 50 feet over the Hackensack River in the New Jersey Meadowlands, and allow marine traffic to pass underneath without interrupting rail traffic.

The project is being funded by the U.S. Department of Transportation, NJ Transit and Amtrak. In January 2021, NJ Transit received a Full Funding Grant Agreement, securing $766.5 million from the Federal Transit Administration (FTA) to support construction. The Federal Highway Administration is providing some $57 million for the project. NJ Transit and Amtrak will provide the balance of funding, about $977 million, and share operations and maintenance.

“NJ Transit is proud to be advancing this project of national significance,” NJ Transit President and CEO Kevin S. Corbett said. “This notice to proceed means that soon construction will begin—improving reliability for the millions of customers who count on this critical rail link between New Jersey and New York every year, while creating jobs and spurring economic growth for our region.”

“NJ Transit and Amtrak are taking a vital first step in bringing the Gateway Program to life by starting construction on the Portal North Bridge,” Gateway Development Commission Co-Chairs Balpreet Grewal-Virk and Steven M. Cohen said. “The bridge will be a visible symbol of progress while it’s being built and will bring a better passenger experience into and out of New York and greater reliability and resiliency on the busiest stretch of the Northeast Corridor.”

“Because of our shared unwavering commitment, we now celebrate the start of major construction on a new Portal North Bridge—the first of the Gateway Program projects to reach this milestone,” Amtrak Board Chairman Tony Coscia said. “The new bridge rising over the Hackensack River will be a visible reminder to Northeast Corridor passengers that a new day is dawning for rail travel in America—safer, faster and more reliable.”

In related developments, New Jersey Alliance for Action on Feb. 25, 2022, recognized NJ Transit with Leading Capital Construction awards for its work on the Port North Bridge Project Construction Phase and on the Lyndhurst and Perth Amboy station projects.

The Hudson Tunnel Project, another component of the Gateway Program, in January 2022 received a new rating from the FTA Capital Investment Grants program.