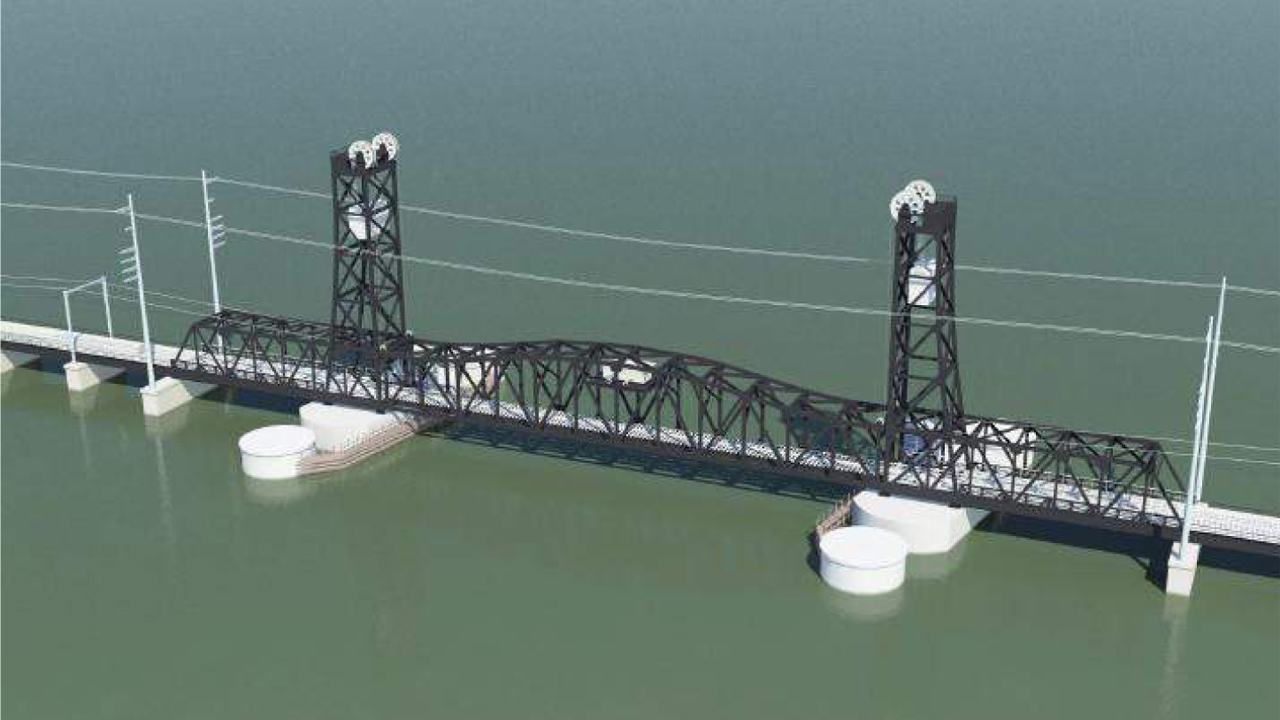 NJT’s $595 million Raritan River Bridge, a replacement for a 108-year-old swing span, will be a lift bridge.

New Jersey Transit has awarded a contract worth $247.95 million to George Harms Construction Co. of Farmingdale, N.J. for the first of three construction phases of the Raritan River Bridge Replacement project on the electrified North Jersey Coast Line. The existing moveable bridge, a swing span built in 1908 and known as River Draw, sustained significant damage during Superstorm Sandy in 2012 when it was struck by a runaway tugboat, shifting it on its pilings and requiring emergency repair before being placed back in service.

The total cost for all three project phases is estimated at $595 million, of which $446.31 million is financed by a Federal Transit Administration Emergency Relief Program grant for resilience projects in response to Superstorm Sandy. NJT allocated $247.95 million, or 44%, of the FTA grant to finance 100% of the phase one contract awarded to George Harms Construction.

The new Raritan River Bridge will be a lift span. Work included in the first-phase contract includes bridge approach spans, lift bridge and flanking spans piers, and associated land work. The next portion of the project, to be awarded in the future, would include construction of the lift bridge and flanking spans superstructure, communications, signal and overhead catenary work. The final portion will be the demolition of the existing River Draw bridge following the new bridge entering into service.

NJT said the one‐time total economic impact of the Raritan River Bridge Replacement project for New Jersey’s economy will be $1.0 billion, including direct, indirect and induced economic impacts, supporting 5,740 jobs and $352.5 million in earnings, according to studies by the Rutgers University Center for Advanced Infrastructure and Transportation (CAIT).

The bridge project is part of NJT’s Resilience Program, which was initiated following Sandy to make the agency’s operations and infrastructure stronger and more reliable for customers. “We continue to make strategic resiliency investments in our infrastructure to ensure the long-term viability of the transportation system,’’ said NJT President and CEO Kevin Corbett. “The Raritan River Bridge Replacement contract awarded [to George Harms Construction] is a great step forward in ensuring our North Jersey Coast Line customers have robust and sustainable rail service that will better withstand the effects of extreme weather, while meeting the current and future transportation needs of our customers for so many decades to come.’’