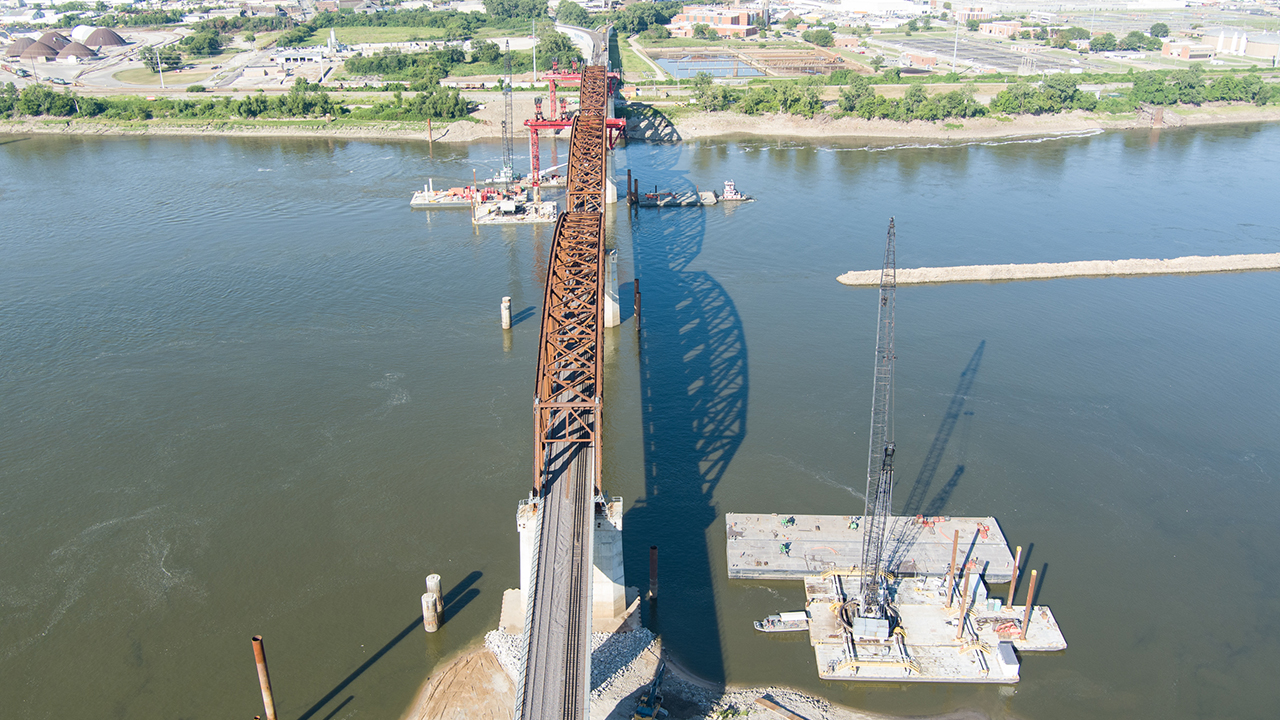 The 133-year-old Merchants Bridge, which spans the Mississippi River at St. Louis and links Missouri and Illinois, officially reopened to rail traffic Sept. 15, following completion of a $222 million replacement project. Owned and operated by the Terminal Railroad Association (TRRA), the bridge serves six Class I railroads and Amtrak.

The opening marked the culmination of almost a decade of planning and advocacy and four years of reconstruction. Merchants Bridge is an important part of a primary east-west rail corridor serving one of America’s largest rail hubs by car interchange volume and gross tonnage. The double-track expansion doubled the bridge’s capacity to 70 trains per day. The bridge required reconstruction due to speed, clearance and load restrictions. Not replacing it “would have resulted in rail traffic being rerouted out of the bi-state St. Louis region, potentially limiting shipping options for area rail-reliant businesses, increasing costs and lost jobs, and adding stress to an already overburdened U.S. supply chain network,” officials noted.

Merchants Bridge is the second oldest bridge over the Mississippi River in the St. Louis region. Constructed in 1890, it is one of two rail bridges that serve six Class I railroads and Amtrak to cross the Mississippi River at St. Louis. Its replacement, officials said, “has been the bi-state region’s top freight infrastructure priority since 2016.” Priorities are selected annually by the St. Louis Regional Freightway, the region’s freight district that identifies key infrastructure projects and then advocates for funding.

This is the first time in TRRA’s 133-year history that it has built a bridge. TRRA maintained rail operations during construction on a single-track basis. Only 24 days of rail outages were needed over the course of the four-year project—eight days for the installation of each new truss.

Walsh Construction was selected as the general contractor and awarded the project in July 2018. TranSystems and Burns and McDonnell served as project engineers. Veritas Steel in Eau Claire, Wisc., fabricated the steel. The contract required the coordination of several trades, including local union laborers, carpenters, pile drivers, operating engineers, iron workers, electricians, painters, quality control technicians, surveyors, and rail workers. Walsh and its 60 subcontractors and vendors employed more than 100 tradespersons to complete the work. The contractor coordinated more than 60 subcontractors and vendors to provide more than 40 million pounds of steel products 25,000 cubic yards of concrete.

The project required extensive coordination with the United States Army Corps of Engineers to assemble and follow permitting requirements to protect the Mississippi River, its infrastructure and the surrounding environmental concerns, including flooding, protected wildlife and historic preservation. The team also coordinated with the U.S. Coast Guard to maintain safe passage of commercial and private river navigation and allow closures of the river navigational channels to erect the piers and spans.

Rehabilitation began in July 2018. The major components included replacement of the bridge’s main spans, pier renovation and expansion to double track. A design-bid-build project, reconstruction of the bridge “used innovative project delivery methods that improved safety and speed while limiting bridge and river traffic outages,” officials noted. New spans were fabricated in Wisconsin and shipped to St. Louis for final assembly on the west bank (Missouri side) of the Mississippi River, and each truss was floated into place immediately after the old spans were floated out. Removal and installation of the three new bridge trusses required three separate eight-day rail outages, and three separate river channel outages.

The east approach (Illinois side) was reconstructed by encasing the existing trestle steel structure and using MSE wall and lightweight cellular concrete technology to widen the structure and provide additional load capacity that will lower future maintenance costs. All the structural steel being used for the project was produced in the U.S.

Permitting and river construction was complicated by a Mississippi River flood during mid-summer 2019, recording the second highest river crest in the St. Louis area at 45 feet on the river pool gauge.

The river work included cofferdams surrounding each pier that allowed the contractor to install foundations and protective concrete encasements to strengthen the piers. This work added 3 feet of concrete to each side of the pier and updated the seismic capacity of the bridge’s foundations. This work required installation of a 45- by 90-foot steel sheet piling enclosure and placement of more than 2,500 cubic yards of concrete per pier to seal the bottom of the cofferdams, which stabilized the cofferdam and protected the existing caisson pier inside. The contractor pumped concrete over a distance of more than 1,000 feet from each shore to the river piers along the existing bridge deck to expedite the concrete placement. The coffer dams allowed the contractor to work at times more than 30 feet below river surface level. To remove water leaking through the cofferdam, the contractor maintained dewatering pumps 24 hours per day.

Concrete pier encasement required drilling hundreds of steel dowels into the existing granite and limestone masonry piers to distribute the weight of the new truss to the old pier. Access for dowel installation, rebar work and concrete placement was provided by small electric lifts and ladders inside the cofferdams. Access to the concrete was also provided by cranes and aerial lifts mounted on barges.

Each new truss span required more than four months of assembly and several weeks to complete walkway, railing, platforms and ladders, waterproofing and trackwork in preparation for installation. The contractor elected to assemble the truss spans on four 35-foot-wide by 195-foot-long by 10.5-foot-deep barges. During assembly, the barges were moored to large vertical pile casings designed to withstand river pool elevation changes of 49 feet with an accompanying 70 mph wind velocity. These moorings were 9 feet diameter, 90 feet long, set 10 feet into a hole socketed into bedrock, and filled with pea gravel to maintain pile structural shape. The contractor used sectional barges to construct a floating dock to secure the barges to mooring piles.

Continuously changing river surface elevations required constant observation of the river elevation to determine the safe passage of materials and tugboats for the work. The contractor used three 2,000-hp tugs. While installing the truss spans, the number of tugboats increased to six.

Truss installation was performed using a specifically designed gantry system that spanned more than 115 feet and towered more than 95 feet above the water. Each end of the truss was lifted by a set of two gantry girders weighing up to 700,000 pounds per pair. The girders were fitted with “slide rails” and horizontal jacks that moved the truss span laterally. The system lifted the truss spans with four strand jacks and strands at each end totaling eight strand jacks capable of lifting almost 1,000 tons per each jack (8,000 tons total). This system enabled the contractor to lift the truss span from any reasonable water elevation to the top of the piers, slide the span laterally more than 65 feet, and set it with precision.