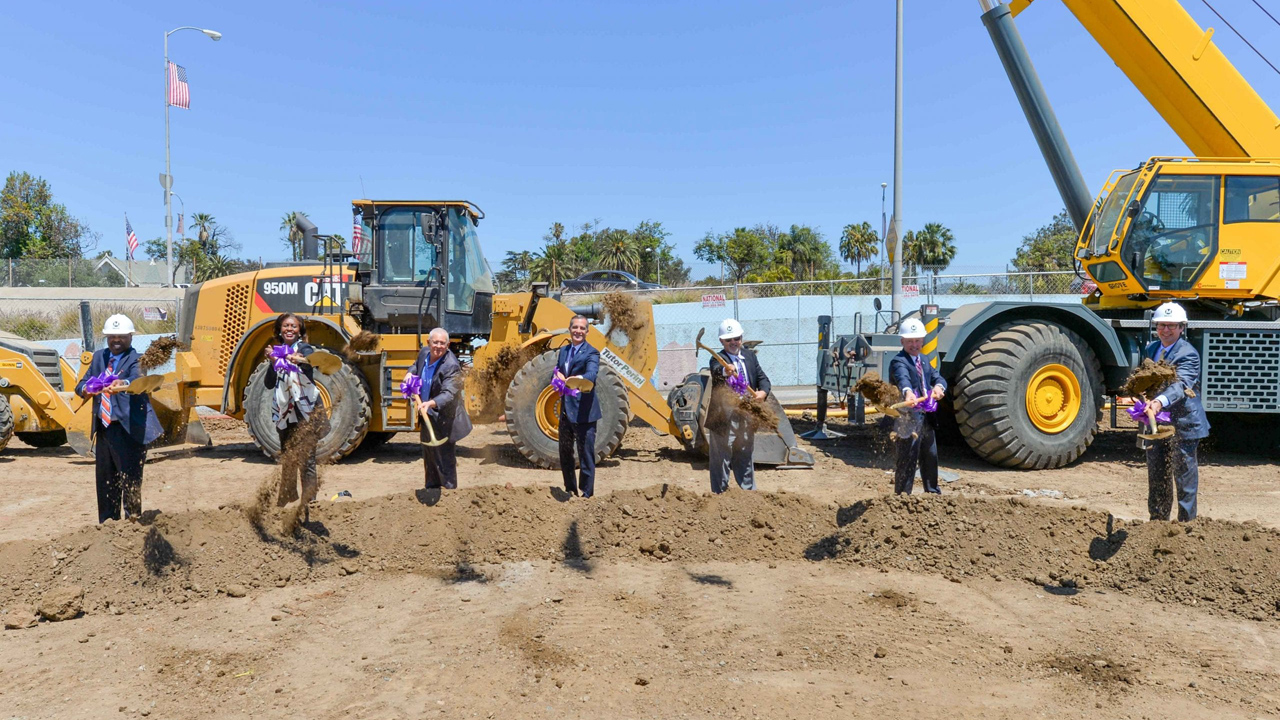 Representatives from Los Angeles County Metropolitan Transportation Authority, Federal Transit Administration, U.S. Department of Veteran Affairs, UCLA and other local and federal officials marked the start of major construction on the third and final section of the Purple (D Line) Extension Project with a groundbreaking ceremony on May 24.

The agency was joined by the Federal Transit Administration (FTA), U.S. Department of Veteran Affairs, UCLA, and key local and federal officials to mark the start of major construction on the third and final section of the Purple (D Line) Extension Project that will connect downtown Los Angeles and the Westside via a high speed, high capacity subway in 2027.

FTA Acting Administrator Nuria Fernandez was in attendance to celebrate the $3.6 billion Section 3 project, which has received a $1.3 billion grant from the U.S. Department of Transportation. The project will connect two previous subway sections through Koreatown, Beverly Hills and Century City, and extend another 2.5 miles to Westwood. LACMTA will build new stations at Westwood/UCLA to serve Westwood Village and UCLA, and at Westwood/VA Hospital to serve the hospital campus just west of the I-405 freeway (see map below).

Contractor Tutor-Perini/O&G’s near-term work for the future Westwood/VA Hospital station includes a piling operation to create a temporary support structure for the underground station. Drill rigs will dig 100-foot-deep holes into the ground and a crane will place piles into each. After the pile is put in place, each hole will be filled with concrete to provide support for the station walls. Following piling completion later this year, the contractor will begin excavating the subway station box.

Prior pre-construction work to date has consisted of final design, advanced utility relocation, and tunnel boring machine assembly and component testing, among other efforts.

“The Purple Line Expansion is the key that will unlock our transportation future and open doors of opportunity across our city—and today’s [May 24] groundbreaking moves us one step closer to completely redefining our relationship with public transit,” Los Angeles Mayor and LACMTA Board Chair Eric Garcetti said. “We promised Angelenos a world-class transit system when we passed Measure M, and this milestone is a clear indication of our commitment to make Los Angeles a more accessible, sustainable, and inclusive city.”

“The Federal Transit Administration is proud to partner with Metro [LACMTA] and the entire Los Angeles region to bring more transportation options to residents, veterans, students and visitors to the 2028 Summer Olympics through the Purple Line extension,” FTA Acting Administrator Nuria Fernandez said. “This project is an excellent example of a transformational infrastructure investment that the Biden-Harris Administration supports. It will improve access and mobility for millions of people traveling in one of Los Angeles County’s most congested corridors.”

The $9.5 billion project was able to secure approximately half of the total project cost from the FTA.

LACMTA is actively building all three sections of the subway extension, which are planned to open in 2024, 2025 and 2027, respectively. The first section between Wilshire/Western and Beverly Hills is nearly 70% complete. Section 2 is now nearly 45% complete. Section 3, including pre-construction work, has reached 20% completion.

The subway extension to the Westwood/VA Hospital station will garner about 49,300 daily weekday boardings at the seven new stations. There will be about 78,000 new daily trips on the full LACMTA Rail System as a result of opening this line.

“I want to thank U.S. Sen. Dianne Feinstein [D-Calif.] for championing this project as a key member of the Senate Committee on Appropriations,” LACMTA CEO Phillip A. Washington said. “I also want to express my appreciation to FTA Deputy Administrator Nuria Fernandez, Vice President Kamala Harris, Congresswoman Karen Bass, Congressman Ted Lieu, and all members of the Los Angeles County Congressional Delegation for uniting behind this project and ensuring that federal funding would be prioritized for this important project. It is truly a project of regional and national significance.”

Prior to the pandemic, more than 300,000 workers traveled every morning to the Westside, the second largest job center in the region. More than 100,000 trips also leave the area for outside destinations. As the pandemic has eased, traffic has returned and the subway extension project will offer improved connectivity to the entire LACMTA bus and rail network, as well as transfers to municipal bus lines and other regional transportation services.