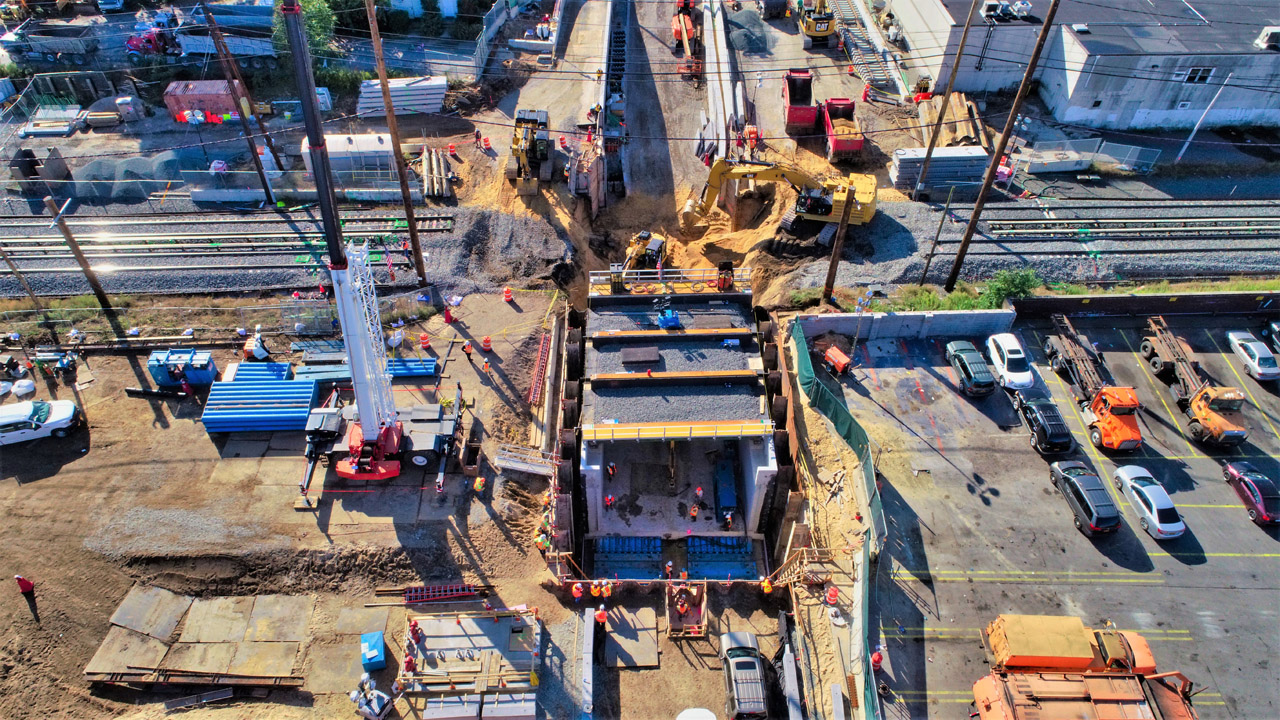 The New York Metropolitan Transportation Authority (MTA) reported that five railroad crossings were eliminated and bridge and station upgrade work continued in 2020, as part of its LIRR (Long Island Rail Road) Expansion Project. The project will add a third, 9.8-mile track from Floral Park to Hicksville, N.Y., to reduce train congestion and delays.

MTA Construction & Development (C&D) and LIRR contractors met these project milestones, and others, ahead of schedule and under budget despite the challenges of a global pandemic, MTA said.

Among the 2020 work highlights:

• Five Railroad Crossing Elimination Projects. The new School Street undergrade crossing on the border of Westbury and New Cassel opened in November. It features a two-lane roadway with a pedestrian walkway on the east side. The bridges carrying LIRR trains over the underpasses were constructed on-site and pushed into place during service outages in just one weekend.

The two crossings at Willis Avenue in Mineola—one at the main line and one at the Oyster Bay branch—were closed in November in preparation for construction of an underpass to replace both. Underpass work is slated for this fall.

The S. 12th Street railroad crossing in New Hyde Park was permanently closed in October to make way for the construction of an ADA-compliant pedestrian underpass this spring.

• Four Bridge Replacement/Modification Projects. During a main line service outage on a September weekend, MTA C&D installed steel girders over the Meadowbrook Parkway, in Carle Place, that will carry the LIRR’s third track. The bridge, owned by the New York State Department of Transportation, has been in service since 1956 and maintains its current 13-foot-2-inch clearance since commercial traffic, such as tall trucks, are not permitted on the Parkway.

The MTA replaced the 78-year-old Glen Cove Road bridge in Carle Place in June. During a weekend double-track service outage, the old two-bay bridge was removed and replaced with a new three-bay bridge, built on-site, to accommodate the future third track.

In April, the Plainfield Avenue bridge modification project was completed. The bridge, located in the village of Floral Park and in service since 1958, received a new single-track span to accommodate the third track.

The Linden Avenue underpass was also completed in April. It is the only pedestrian access to the Floral Park Pool and Recreation Center from the north side of the LIRR main line.

In May, Murray Hill station work was completed, including the addition of two elevators and the installation of renewed retaining walls, new lighting, security cameras, signage and pigeon abatement measures.

ADA elevators, new platforms and canopies were among the upgrades completed at Nostrand Avenue Station in Brooklyn in January.

• Switches and Substation Work. Switches for two interlockings—Nassau 1 and Nassau 3—and electrical substations in Floral Park, Freeport and New Cassel were installed.

• This fall, the Tanners Pond/Denton Avenue Bridge will be the last of the seven bridges to be replaced or expanded.

• This winter, the Main Street Railroad Crossing will be the last of eight crossings to be eliminated.

• Four station projects are scheduled for 2021. In October, the Elmont Station will partially open, with station completion expected by year-end 2022. It will feature new canopies, Wi-Fi, charging stations and electronic displays. This winter, the Floral Park station will receive three ADA elevators (one for each platform). Also this winter, the Carle Place station will be upgraded with canopies, artwork, a new pedestrian underpass with ADA elevators, Wi-Fi, charging stations, digital signage, and a new roundabout for passenger drop-off and pick-up. Merillon Avenue station, with similar upgrades, will be completed by mid-year.

• This winter, garages on Harrison Avenue in Mineola (551 Spaces) and Westbury North (587 spaces) will be completed.

When the LIRR Expansion Project is finished, eight grade crossings will have been eliminated; seven bridges replaced or expanded; five stations completely rebuilt; 9.8 miles of third track installed; and infrastructure, such as power substations and interlockings, built.