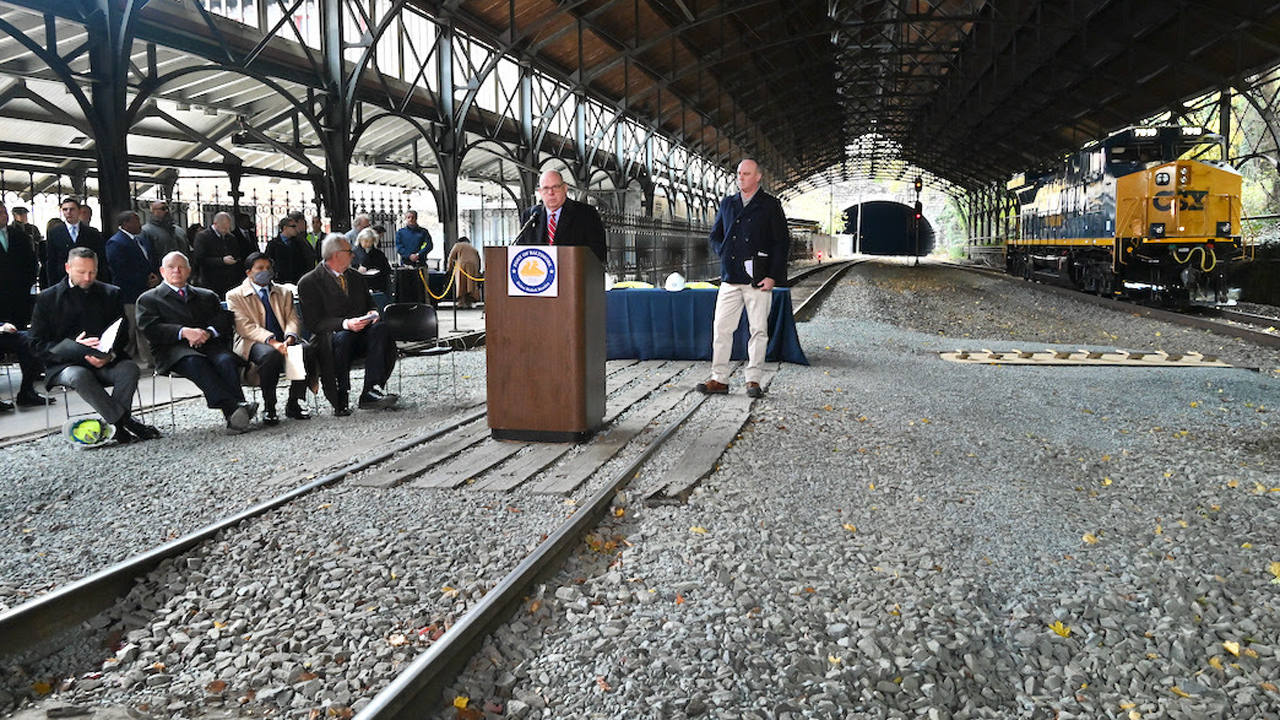 Officials ushered in the Howard Street Tunnel project in Maryland on Nov. 29.

Maryland Gov. Larry Hogan led public- and private-sector leaders in breaking ground on the $466 million Howard Street Tunnel expansion project, which will reconstruct the 126-year-old freight rail tunnel to accommodate double-stack container trains to and from the Helen Delich Bentley Port of Baltimore.

“Today [Nov. 29], as we kick off reconstruction of this Howard Street Tunnel, we are proving once again that investing in infrastructure is critical to our state and national economies and to the lives of everyday Marylanders and Americans,” Hogan said. “This is a continuation of our concerted efforts to make the Port of Baltimore much more competitive with other ports for the extremely sought after containerized cargo market. It is an absolute game changer, not just for Maryland, but for the entire region.”

The project consists of vertical clearance improvements at the Howard Street Tunnel and at 21 other locations between Baltimore and Philadelphia, Pa., to allow double-stacking. The Howard Street Tunnel, owned by CSX, will be reconstructed to provide an additional 18 inches of clearance. Three additional bridges in Baltimore also will require superstructure work: the North Avenue bridge will be modified and the Guilford Avenue and Harford Road bridges will be replaced. Other locations in Maryland, Delaware and Pennsylvania will require only track lowering beneath the structures.

“Expansion of the Howard Street Tunnel has been a goal for decades because we know what it means for jobs and economic growth,” Slater said. “Today, it’s becoming a reality because of the leadership of Governor Hogan and the hard work, vision and collaboration of all the partners—MDOT, CSX, the U.S. Department of Transportation, and Baltimore. Freight rail is an essential link in the nation’s supply chain. This investment strengthens that link for generations to come and positions the Port of Baltimore as the primary hub for the East Coast and a major conduit for goods moving across America.”

With its deep container berths and supersized cranes, including four new mega cranes that arrived in September, the Port of Baltimore is among only a few East Coast ports that can accommodate some of the largest container ships in the world. Double-stack capabilities will allow the port to accommodate expected container growth in future years. Double-stacking also will provide a more cost-effective way to transport freight by rail compared to trucks, reducing congestion along the I-95 corridor and delivering environmental benefits with less emissions.

“CSX is proud to officially break ground on the Howard Street Tunnel project and move forward on an initiative made possible by the collaboration between state, port and federal partners,” Foote said. “This project will modernize our rail infrastructure in this key corridor and help improve freight transportation, increase freight rail capacity, and further intermodal connectivity between the markets we serve. It will enhance rail’s competitiveness with trucks, providing customers with a sustainable alternative, and remove more traffic from the highways.”

For years, reconstruction of the Howard Street Tunnel to accommodate double-stack trains was estimated to cost between $1 billion and $4 billion, with significant disruption to surrounding communities. By utilizing advances in construction technology, CSX and the state of Maryland have determined it is possible to provide double-stack clearance for significantly less money and minimal impact to communities.  The project’s current $466 million cost includes $202.5 million from the state, $125 million in a federal INFRA grant, $113 million from CSX, $22.5 million from Pennsylvania, and $3 million in federal highway formula funding. Funding was split between parties that benefit from the project; the state of Maryland will benefit through increased container business at the Port of Baltimore.

“FRA is eager to see the U.S. Department of Transportation’s Infrastructure for Rebuilding America (INFRA) funding utilized to enhance productivity at the Port of Baltimore, grow local economies and create job opportunities,” Bose said. “The Biden administration is committed to modernizing infrastructure, and with the generational investment included in the Bipartisan Infrastructure Law, we are poised to make passenger and freight networks safer, more resilient, and more sustainable across America.”