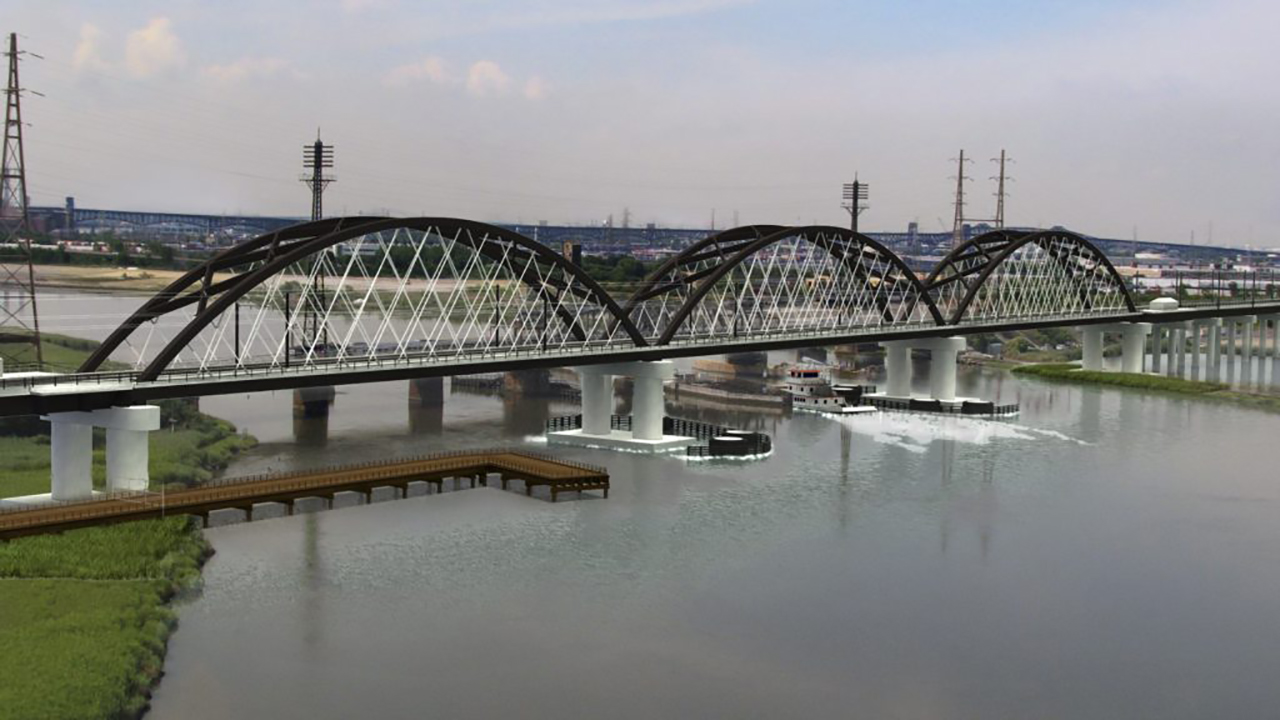 New Jersey Transit, with support from Amtrak, the Gateway Program Development Corporation (GDC) and federal partners, has completed preliminary construction on the 2.3-mile-long Portal North Bridge, a fixed span that will replace the existing, century-old-plus two-track moveable span on the Northeast Corridor (NEC) over the Hackensack River, between New Jersey and New York.

The new bridge, NJT says, will increase its capacity by 10% and allow trains to move faster and more reliably over the Hackensack River.

The project included installation of new poles to carry fiber-optic data communications and transmission cable lines for services to New York City and the surrounding metropolitan area; construction of utility protection for a century-old cast iron water main that supplies water to Jersey City, N.J.; erecting two poles that carry the high-voltage (138kV) transmission lines that supply power to the OCS (overhead contact system, or catenary) along this section of the NEC; and construction of a finger pier to support future construction activities, and a retaining wall just west of Secaucus Junction that will support the new bridge alignment.

The NJT-sponsored and -managed project, which broke ground in October 2017, was completed “on time and on budget,” the agency said. Funding was provided through a $16 million federal TIGER grant awarded in September 2016 to NJT, with a local match of $4 million from New Jersey’s Transportation Trust Fund (TTF). In mid-2018, NJT’s board approved a financing agreement with the New Jersey Economic Development Authority for up to $600 million toward construction. “This commitment solidified New Jersey’s local share of the project cost,” the agency said.

Completion of Portal North Bridge will depend upon the U.S. Department of Transportation’s approval of the funding application submitted by NJT in 2018 through the Core Capacity program. The agency plans to hold an informational meeting for interested contractors this spring.

“The current Portal Bridge is a frequent source of delays and frustration for our customers,” said NJT Executive Director Kevin Corbett. “With the completion of this milestone on-time and on-budget, we eagerly await the USDOT’s approval of our funding application to maintain forward progress on this vital project. We are one step closer to improving the reliability and predictability our customers deserve as they commute to and from work, school and recreation.”

“On time and on budget completion of the early construction work on the Portal North Bridge project is a major achievement that demonstrates the value of an effective partnership in delivering complicated projects,” said the GDC. “With $600 million committed by the State of New Jersey and the strong support of [New Jersey Gov. Phil Murphy and New York Gov. Andrew Cuomo], we are eager to continue this momentum. Replacing a century-old moveable bridge with a modern span that is less prone to failure will immediately improve the quality of life for 200,000 daily passengers and make this busy stretch of the Northeast Corridor safer and more reliable.”