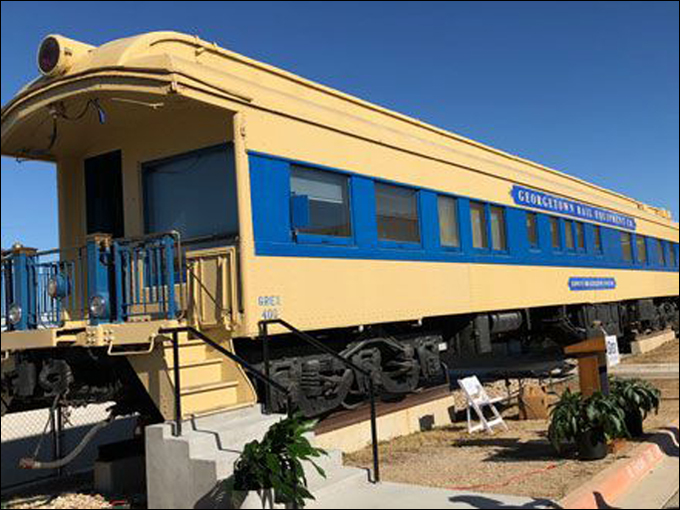 The Snead Family, responsible for founding several Georgetown, Texas, businesses, including a quarry, a railroad and a rail solution company, was honored at an event held Jan. 29 at Georgetown Rail Equipment Company (GREX).

GREX Executive Chairman Chris Aadnesen hosted the gathering outside the historic GREX Business Car 400, which recently made the move to its permanent home at GREX’s headquarters. Attendees included members of the Snead family, employees of the quarry, railroad and GREX businesses, as well as local officials. Aadnesen said the event was a way to thank the Snead family for their contributions to the rail industry and the Georgetown community.

GREX notes that the Snead family is a longstanding name in the rail and quarry industry beginning in the 1940s when Edwin Brazelton Snead founded Texas Crushed Stone.

Snead and his sons Ned (1929-2015) and Bill worked together to make Texas Crushed Stone, which still operates out of Georgetown, the most productive limestone quarry in U.S. history. The elder Snead also founded Georgetown Railroad in 1958 to enable hauling of limestone from Georgetown to Austin.

Ned Snead later went on to create GREX, while Bill followed in his father’s footsteps and is now president of Texas Crushed Stone and majority owner of Georgetown Railroad.

This year marks the 25th anniversary of the founding of GREX, which has grown from its initial offering of the DumpTrain® aggregate delivery system into a full suite of automated materials handling solutions, as well as 3D track inspection solutions. Over the past 25 years, the company has filed a total of 92 patents in 12 countries with 43 active, 28 pending and 21 expired.

In order to move the GREX Business Car 400 to its new location, GREX enlisted the help of another railroad contractor, R. J. Corman, which helped secure a couple of self-propelled low boys to help with the move and installation.

The GREX Business Car 400, named the “Edwin Brazelton Snead,” not only played a role in the rich history of the Snead family, but U.S. history, as well. John Kinnear, vice chairman of the GREX Board of Directors, shared a story at the event describing the first time he saw the car: When President Truman came through his town during a 1948 re-election “whistle-stop tour” where Truman gave speeches throughout Texas and the Midwest from onboard the train.

President Eisenhower and First Lady Mamie Eisenhower used it frequently for travel in lieu of flying. Georgetown Railroad purchased the business car in 1971 before ownership transferred to GREX in 1993. Since that time, many prominent Texas lawmakers, national lawmakers, business leaders and even celebrities have spent time on the GREX Business Car 400.

With the car’s permanent installation at GREX headquarters, the company says it is now tasked with preserving the history of the car and plans to use it for special events, meetings and charitable gatherings.