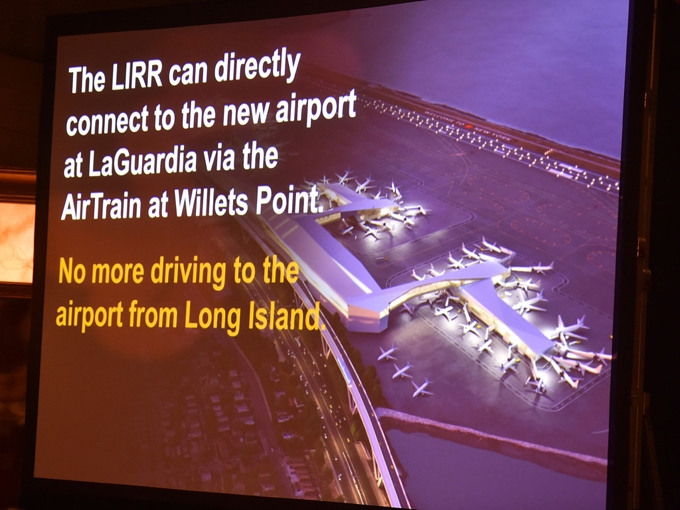 Governor Andrew M. Cuomo unveiled on Jan. 5, 2016 the second signature proposal of his 2016 agenda: a comprehensive plan to transform and expand vital infrastructure downstate and make critical investments in the region, including a major expansion and improvement project that would increase service on the Long Island Rail Road (LIRR) between Floral Park and Hicksville. Cuomo outlined these initiatives at an event in Nassau County, where Long Island Association President Kevin Law, MTA Chairman Thomas F. Prendergast and LIRR President Patrick Nowakowski joined him.

“Long Island’s future prosperity depends on a modern transportation network that eases congestion on our roads, improves service on the LIRR, helps this region’s economy and preserves the character of these great communities,” said Cuomo. “This is a robust and comprehensive agenda to do just that and help build a brighter tomorrow for Nassau and Suffolk residents.”

The signature components of Cuomo’s 2016 Long Island agenda are detailed below:

Currently, the LIRR is limited by track capacity. At peak times, the LIRR is forced to run trains in one direction between Floral Park and Hicksville, making it impossible for reverse commuters and intra-island travelers. In essence, millions of people are limited by a system of transportation designed and virtually unchanged from 50 years ago.

In order to modernize the system, improve commutes for millions of customers, and reduce congestion on Long Island’s roads, Cuomo is announcing a renewed effort to expand the LIRR’s capacity between Floral Park and Hicksville. The project will allow the LIRR to increase service, reduce congestion and train delays caused whenever there is an incident along this busy stretch of tracks and will enable the LIRR to run “reverse-peak” trains to allow people to take the LIRR to jobs on Long Island during traditional business hours. By allowing the LIRR to increase service between Floral Park and Hicksville, it will provide a more attractive alternative to driving and thereby reduce traffic on Long Island’s major east-west highways, like the L.I.E., Northern State and Southern State, and more trains will make it easier for Long Islanders to reach LaGuardia and Kennedy airports by train.

Unlike previous plans, this new effort dramatically minimizes the impact on communities along the right of way. Cuomo’s proposal reduces the previous length of the corridor from 11.5 miles to today’s proposal of 9.8 miles. Even more importantly, the Governor’s proposal would confine virtually all construction activity within the existing right of way. The number of property acquisitions required would be reduced from approximately 200 in prior proposals to just 50 in the Governor’s proposal. Of those acquisitions, only 20 would involve residences, and the average resident acquisition would be five feet wide.

Cuomo’s proposal contains an innovative landowner protection program. Residential land owners would be offered the choice of compensation for the strip of land – on average five feet wide – that the LIRR needs to acquire, or the option of a full buyout. For commercial landowners they would be offered compensation, plus assistance, if needed, from Empire State Development to remain in their community.

Across the whole corridor, the LIRR will conduct environmental reviews including studies to analyze noise mitigation strategies and new rail technology.

Additionally, the LIRR will conduct a comprehensive safety analysis to address and ensure all aspects of safety at the seven remaining street crossings.

Finally, the LIRR is launching an extensive community engagement program to ensure local input is heard and addressed. This will include direct outreach to property owners adjacent to the tracks and broad outreach across all affected communities – elected officials, community organizations and advocacy groups. Meetings will be organized in all communities along the corridor to provide information and to solicit input. LIRR will also launch a new website to provide a venue for residents to provide feedback directly to the project team and to receive continuously updated information about the project.

Two out of every five LIRR riders use the main line between Floral Park and Hicksville. It is the route used by the busy Ronkonkoma and Port Jefferson Branches. Some Montauk Branch trains use the corridor as well, and all Oyster Bay Branch trains use it for a portion of their trips. With just two tracks, this busy corridor becomes congested during rush hour. In the event that a train becomes disabled, the LIRR has very few options to route trains around a disabled train, and the result can be cascading delays rippling across the line and impacting thousands of people.

The LIRR Expansion project will also complement the East Side Access megaproject, which is doubling the LIRR’s capacity into Manhattan by building a new terminal underneath Grand Central Terminal.

“The next generation of young people wants to live in urban areas, whether it is within the five boroughs of New York City or in thriving suburban downtowns and transit-oriented enclaves with easy access to train transportation,” Prendergast said. “Our efforts to expand the Main Line will support transit-oriented development around Long Island and make it easier for Long Island to attract businesses and employees. This isn’t experimental, it’s a well understood direct correlation that we’ve seen happen already in the region served by Metro-North. When there is train capacity to allow New York City residents to ‘reverse commute’ to suburban jobs, people take that opportunity and the job growth follows.”

“When I first came to the LIRR, I was impressed with the magnitude of the operation, and the lengths that our people go to think creatively to overcome challenging situations,” Nowakowksi said. “But I was very surprised that an operation of this magnitude – the central spine of the busiest commuter railroad in the United States – was at its heart very fragile. A third track will enable us to provide a better experience for our customers with better on-time performance and fewer hassles from delayed trains. And it will attract new customers to our environmentally friendly mode of transportation.”