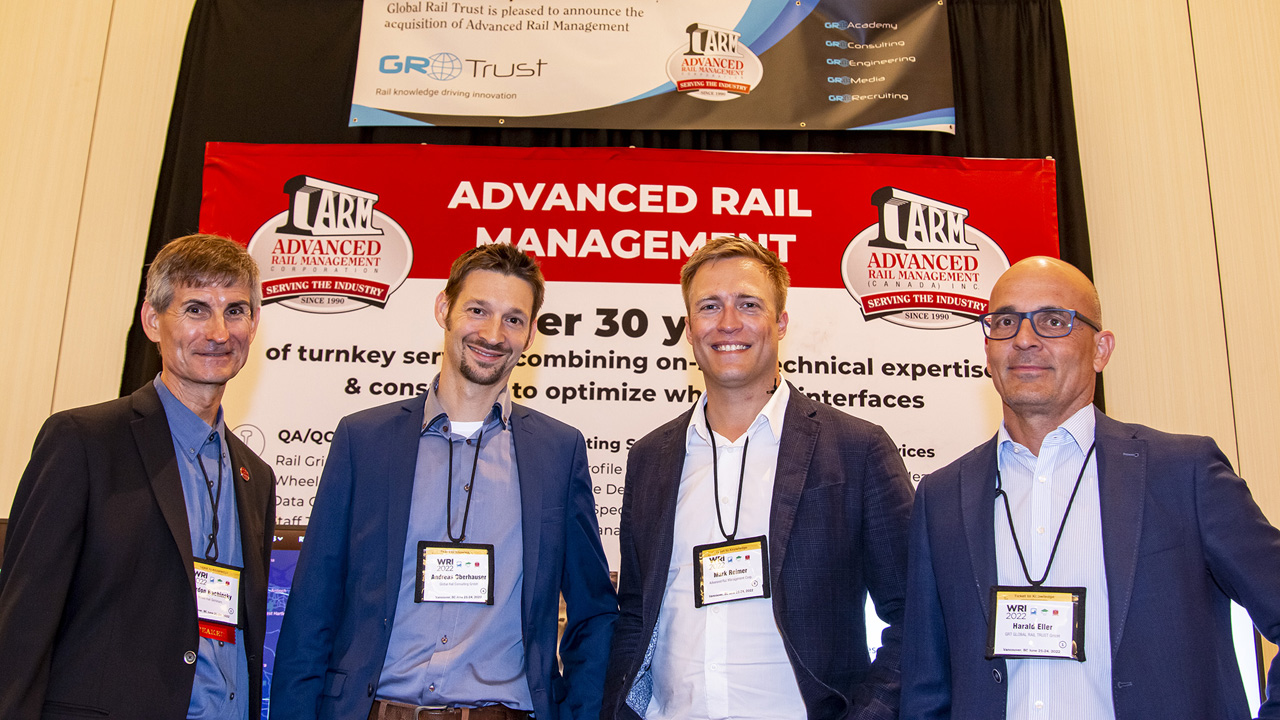 Global Rail Trust (GRT), a consulting firm with offices in Austria, Germany and Spain, has acquired Advanced Rail Management Corp. (ARM), which works with U.S. and Canadian rail systems to optimize and maintain the wheel/rail interface. Financial terms were not disclosed.

GRT announced the acquisition at the 27th annual Wheel Rail Interaction (WRI) Conference in Vancouver, Canada. It said that the contract, which aims to combine “best-in-class rail infrastructure knowledge and consulting expertise to benefit infrastructure and rail operators,” was signed by GRT subsidiary Global Rail North America on June 20. “Over the coming years, strong emphasis will be placed on growing the GRT group’s North American team and operations,” according to the company.

“This acquisition pairs the cutting-edge capabilities of two competent partners for the benefit of infrastructure managers and rail operators in Europe, North America and beyond,” said Harald Eller, CEO of GRT. “We are delighted to add ARM’s knowledge, footprint and North American network to our European expertise. Together, our growing team will fuel rail infrastructure innovation to help strengthen safety, efficiency and capacity for customers.”

“We strive to be a knowledge broker for all relevant aspects of rail infrastructure,” Eller continued. “GRT and its companies are able to connect infrastructure managers, suppliers and other stakeholders from across the global ecosystem while providing critical knowledge, training, consulting, maintenance and, if needed, operations services.”

“The ARM team is thrilled to become part of a global group today [June 21],” said Gordon Bachinsky, CEO of ARM. “For over 30 years, we’ve been leading efforts to assess wheel and rail conditions, design plans to optimize wheel-rail interaction and oversee programs to correct and maintain wheel and rail surface conditions on the major rail transit systems in the U.S. and Canada. Our joining the GRT Group means that we will be able to expand our solutions to other markets, and in turn, facilitate the entry of GRT’s expertise into the North American market.”

At the WRI Conference, which is taking place from June 21 to June 24, GRT said the joint team will “showcase its companies’ integrated capabilities, services and products, including data management, digitalization, inspection, construction, maintenance and operation, as well as essential knowledge transfer, education and training of rail infrastructure staff.”

With more than 30% of the sector’s workforce expected to retire over the next five years, the industry is facing a “major knowledge drain,” according to GRT.

“Our goal is to bridge the pending talent gap and to ensure that relevant knowledge is contained, enhanced with latest insights and technologies and shared with new generations of rail engineers—so that jointly we can shape the future of mobility,” Eller said.