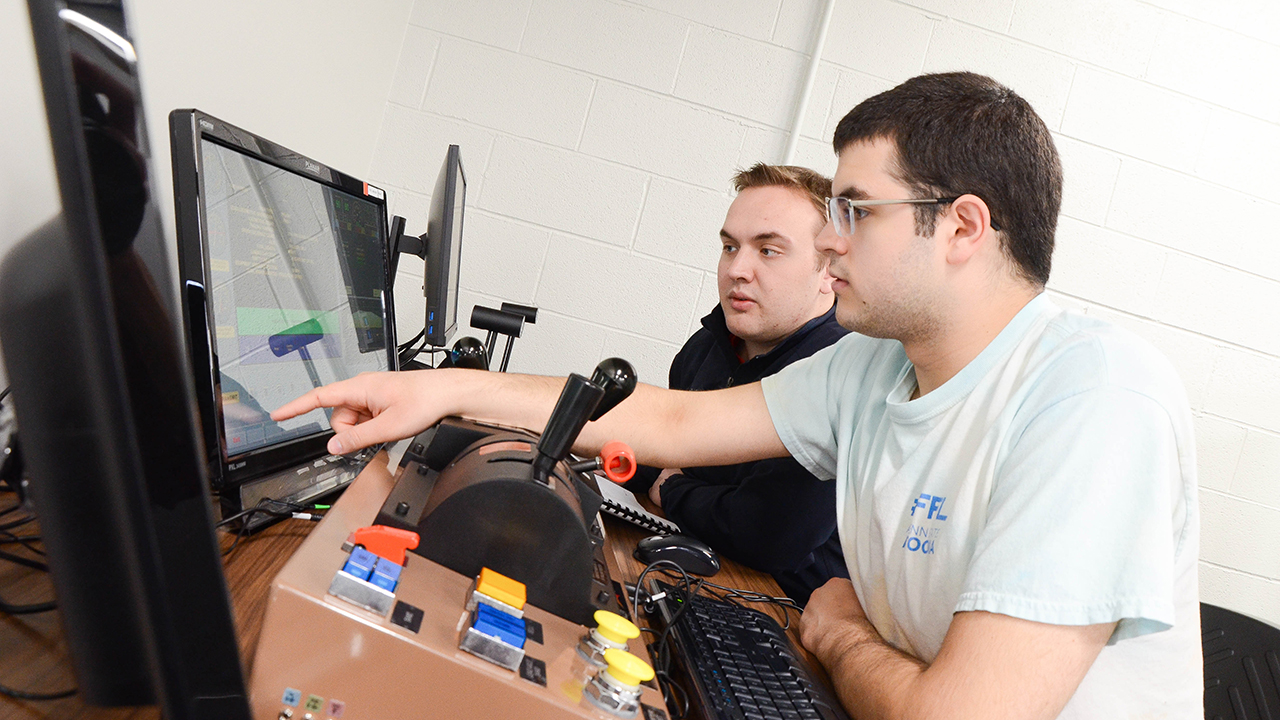 In its eighth year, Penn State Altoona’s bachelor of science degree program in Rail Transportation Engineering (RTE) remains the only one of its kind in the country. Having met the standards set by the Accreditation Board for Engineering and Technology (ABET) in goals, objectives and educational outcomes, students graduating from this program are prepared and eligible to take the Fundamentals of Engineering Exam, the first step toward becoming a licensed professional engineer.

It’s not difficult to understand why the RTE program has become a success. It provides in-depth teaching and hands-on course work by experienced faculty who have worked in the rail industry and continue to conduct research in the field. The program also offers immersive learning and out-of-the-classroom opportunities, plus support from an active advisory board, freight and passenger railroad, suppliers, and consulting companies.  Finally, the 100% job placement rate is a big draw for students.

The program grew out of a need to fill vacancies in the industry from managers and upper-level employees retiring over the past decade. Railroads, consulting companies and even state legislators approached Penn State Altoona with the idea of building this program and beginning to supply the workforce development gap with engineering professionals in the railroad industry.

An Advisory Board was created, comprised of diverse high-level professionals from various sectors of the railroad industry. “They’ve been crucial to the development and growth of the program by guiding the curriculum and providing in-kind support and funding,” says Bryan Schlake, instructor in RTE.

“We know that a rail-specific engineering program will generate graduates who meet the requirements of today’s railroad industry,” adds Gerhard Thelen, former Norfolk Southern Vice President Operations Planning and Support. “This program provides the basic and advanced skills and education for a successful life-time career and is the source of tomorrow’s leaders.”

Building on a mathematical and engineering foundation, students also have numerous opportunities for hands-on experience in labs, field instruction and research. 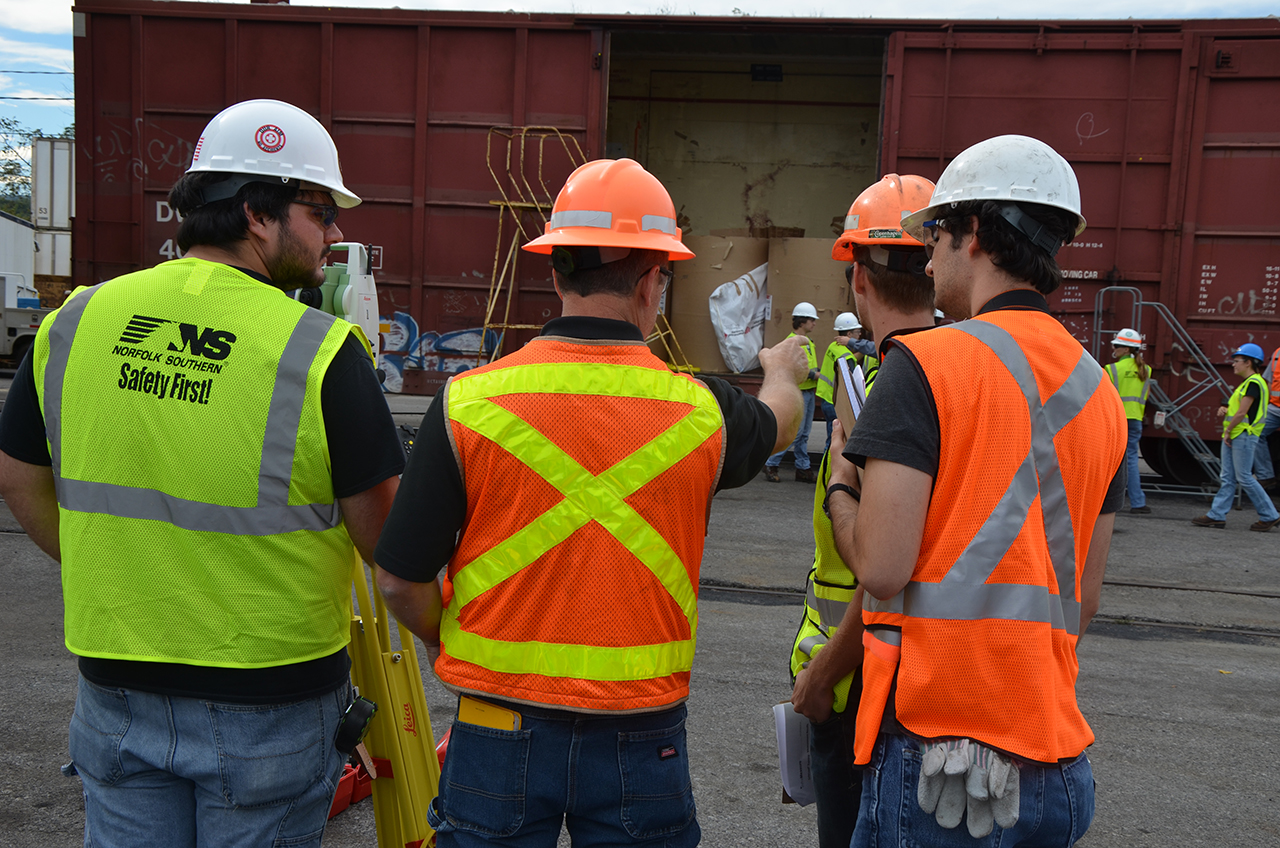 Altoona, rich in railroad history, is the perfect home for the RTE program. The city was founded in 1848 by the Pennsylvania Railroad as a hub for its expanding railroad empire and center of its research and testing activities. Today, Altoona is a major center on the Norfolk Southern Pittsburgh Line. The Juniata Locomotive Shop, originally built by the PRR, is the railroad’s largest repair and maintenance facility. Amtrak trains serve Altoona daily via its Pennsylvanian service.

“We have a living railway laboratory of sorts here with a major Class I railroad coming through town that we can see from our classroom space and our offices,” says Schlake. “There are also multiple short line railroads we partner with for research and various lab exercises.” 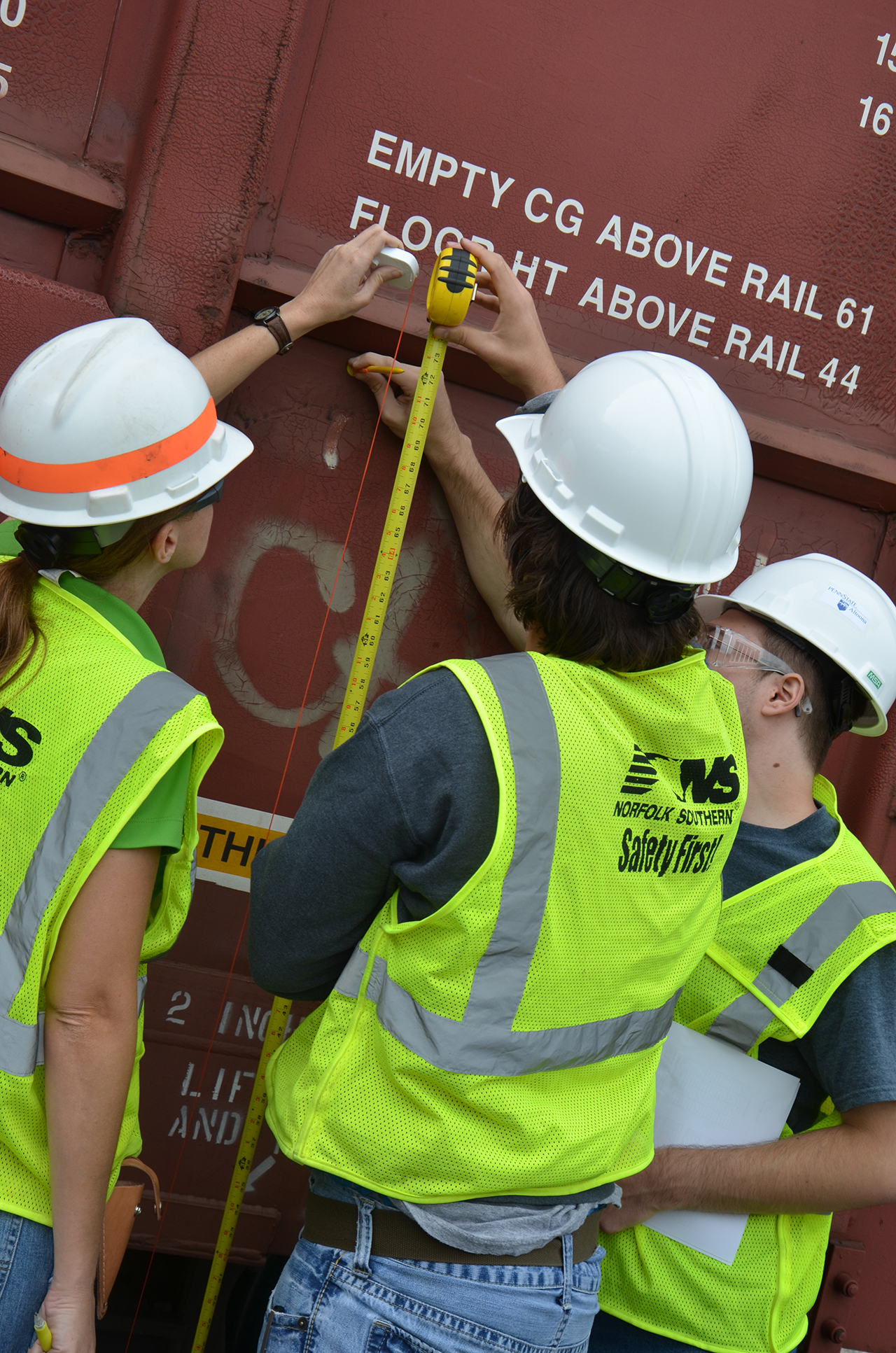 “It’s great to have so many hands-on classes, labs, and experiences,” says Brandon Hilton, a junior. “Having those opportunities helps us gain the skills and knowledge we will need when we go into the field.”

Even within the classrooms, students are using cutting-edge equipment that helps keep them on the forefront of the rail industry’s needs.

In 2017, RTE was awarded a $15,000 education grant from the NRC (National Railroad Construction and Maintenance Association) to purchase 360-degree virtual reality equipment. This laid the groundwork for the launch of what is now the TRAINS lab, the first university-based Virtual Education Lab in the railway industry.

Currently, the TRAINS lab has the locomotive simulator from PST, the Oculus Rift and HTC Vive systems, Oculus Go and Google Daydream headsets, and a Samsung Gear VR platform. The lab also includes a virtual welder trainer for students to practice shielded metal arc and gas metal arc welding in the Railroad Mechanical Practicum course. “Most of the simulations that we do are with track and welding,” states Michael Yohn, a junior in the program. “We can build an entire railroad in the simulation and receive diagnostics from the railroad itself to see how it’s running. It’s a really cool piece of equipment.”

The virtual-reality initiative led to a travel abroad experience during the summer of 2018. Schlake, along with Joe Scott, instructional designer at Penn State Altoona, and a group of students from the RTE program recorded 360-degree videos at various railroad locations in Germany, Switzerland and Austria. Funding for this trip was provided by Leica Geosystems, a Hexagon Company. While in Europe, students collected videos of the trains, railroads, yards and terminals, as well as footage from the operator’s cab on several trains. Once back on campus, Scott helped Schlake and the students develop 360-degree video content showing various European railway applications. These videos are available on the Penn State RTE YouTube channel. 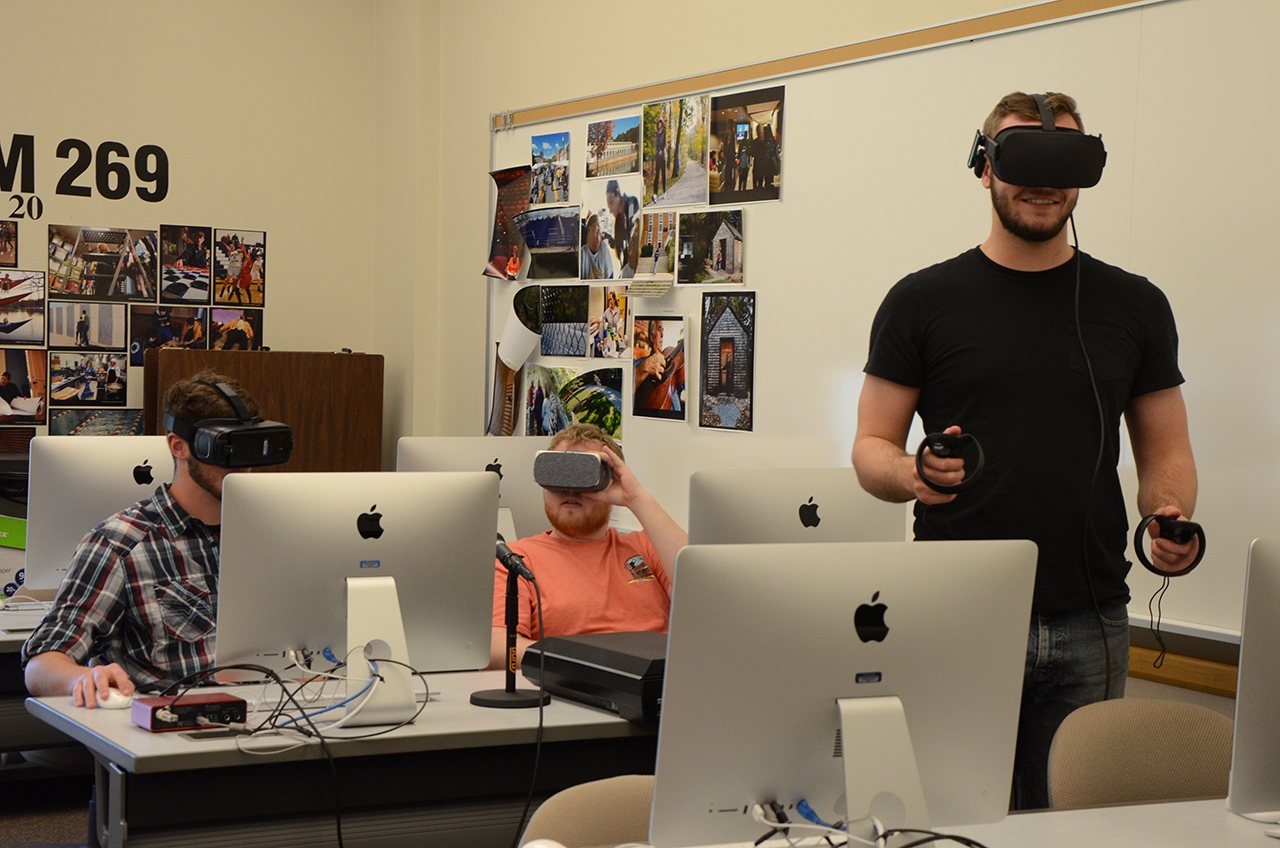 From left, Tyler Talarico-Yunker, Dakota Kistler, and Stephen Harvey, now RTE graduates, were among the first students to test virtual reality headsets new to the program in 2018.

There are more things in the works for the TRAINS lab, including implementation of simulated signal systems equipment and advanced track modeling software.

Besides course work and a major-specific capstone project in their senior year, students have a multitude of supplemental learning at their fingertips.

They can join the Penn State Altoona chapter of American Railway Engineering and Maintenance-of-Way Association (AREMA). This allows them to connect with other engineering students across the country and network with industry professionals through seminars, speakers and field trips. One such trip students experienced was a tour of Amtrak’s Northeast Corridor from Baltimore to New York City on one of Amtrak’s track geometry cars.

The AREMA Annual Conference and the Joint Rail Conference each offer opportunities for students to learn about the latest developments in rail transportation and time for networking with professionals in the industry. The Railroad Industry Exchange (RRIX) Conference, sponsored by Penn State Altoona and first held on campus in 2018, also provides similar opportunities. The Women in Engineering Design (WE-Design) Competition sponsored by Norfolk Southern and engineering-business case competitions sponsored by NS and Curry Rail Services have also allowed students to test their engineering skills and win scholarship money. 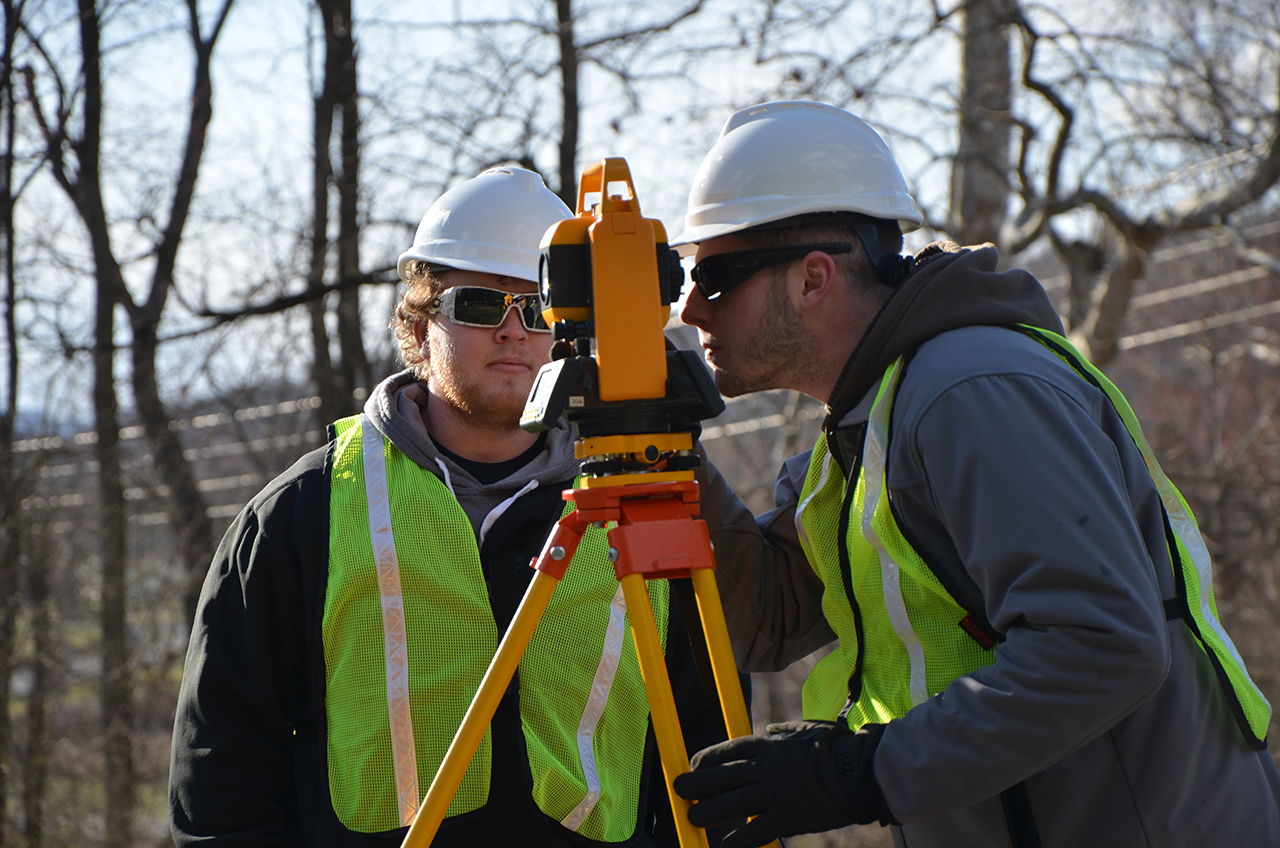 Investing in the Future

Schlake says investing in Penn State Altoona’s RTE program, as a student, employee, or supporter is investing in a solid future. He states that students in the program are pre-qualified for the rail work force. “They are and will be invested in the railway industry. Companies looking to hire can expect our students to stick with the railroad industry for the long haul.”

Because of the commitment Penn State Altoona students have to the industry and the strength of the RTE program, companies are actively recruiting from the college. The program boasts a 100% placement rate, and in fact, many students already have job offers before they formally graduate. Some of the companies that have hired RTE graduates include AECOM, ARUP, Amtrak, BNSF, Conrail, CSX Transportation, GW Peoples, Norfolk Southern, Siemens, Union Pacific, UTLX, Trainyard Tech LLC. and WSP. Almost all students also work as summer interns at various railroads, contractors and consulting firms while they are completing their degree. “Graduates of the RTE program have all been involved in real-world situations,” says Lisa Stabler, President of TTCI (Transportation Technology Center, Inc.) and an RTE Advisory Board member. “They understand and have the tools they need to be successful, so it’s a great marriage to companies looking to recruit employees with those qualities.”

Luiz Almeida graduated in 2018 after interning with Norfolk Southern and ARUP, and currently works as a graduate rail engineer for this international engineering firm. “My boss is a Penn State graduate himself,” she says. “He was looking to hire from his alma mater and exclusively looking for students who had gone through rail-related programs like Altoona’s. It’s such a cool thing that companies are actively seeking us out.”

Shelby Stigers, a 2015 graduate who works for Siemens as a wayside design engineer, sees the rail industry continuing to grow, and with it, the RTE program. “I think rail will always be strong,” he says “There’s too much infrastructure for it not to be, and the population is too large for commuter rail to go away. I see a future of more high-speed rail and maintenance of systems.”

George Mukai, also a 2015 graduate, is pleased with his experience at Penn State Altoona and feels fulfilled in his current work as a roadmaster for BNSF in Denver. “RTE is not a program for people who just love trains,” he says. “It’s a program for people who want a career in a demanding but rewarding industry. It’s challenging, and they aren’t easy jobs, but they are jobs that will reward you for the effort you put into them.”

Almeida believes there is much more to come from the RTE program and hopes to be able to contribute to its growth. “I want to come back some day and see it all,” she says. “I want to ask the students, ‘How is it going, how can I help?’ I owe my career to the program, and I’d love pay it forward.”

Marissa Rea Carney is Media Relations Coordinator in the Office of Strategic Communications and Marketing at Penn State Altoona. 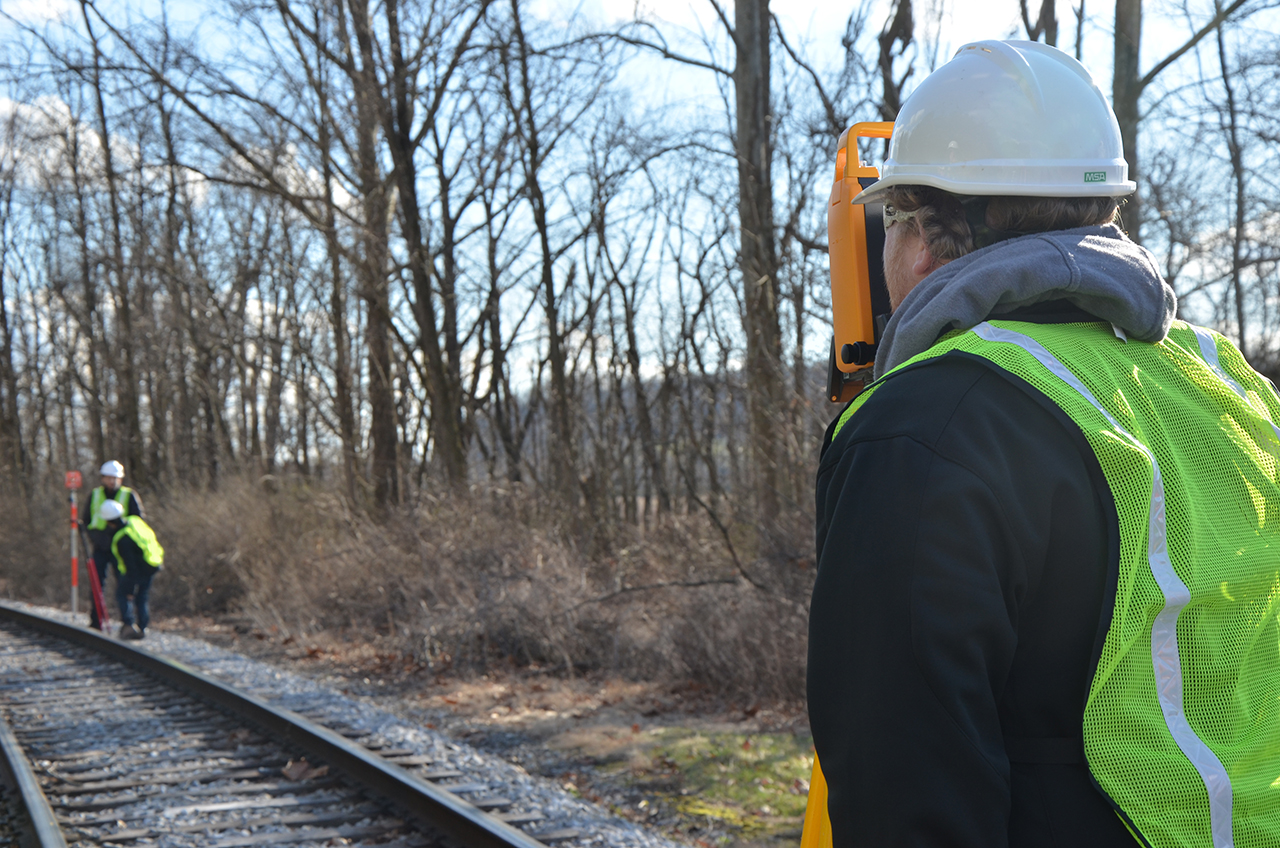