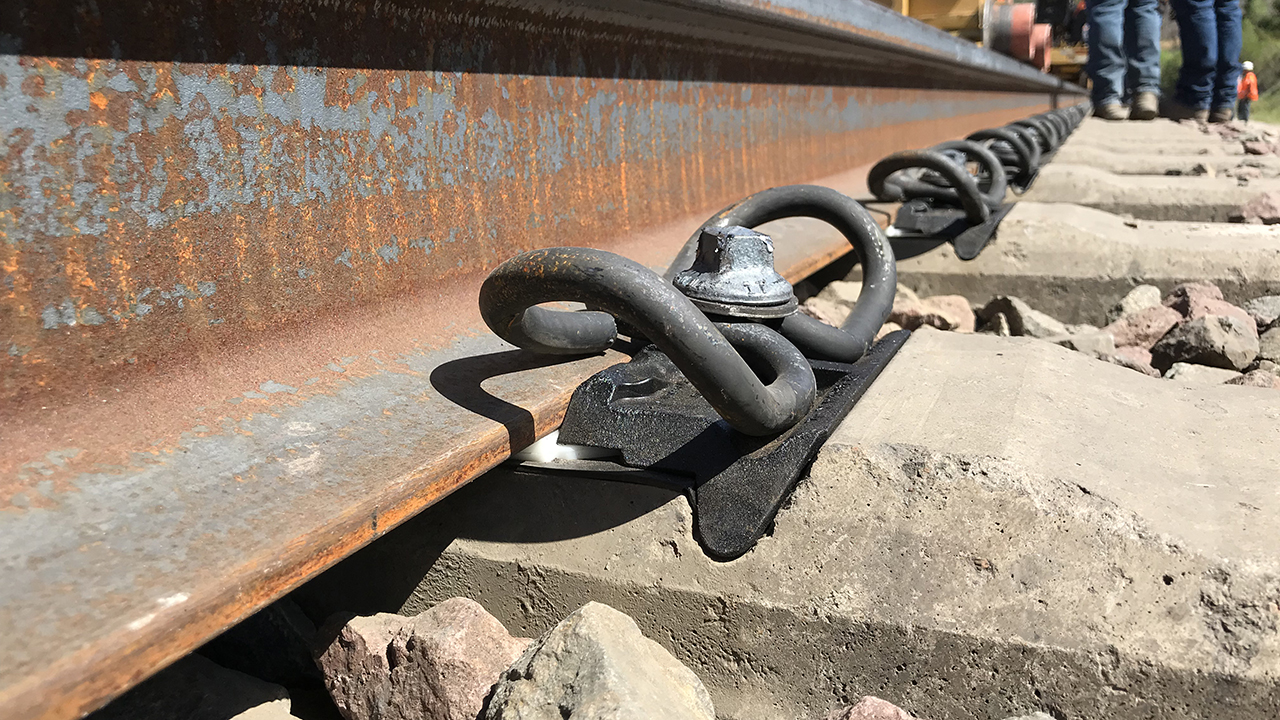 To meet those requirements, suppliers continue to make incremental updates to their system technologies for heavy-haul freight, high-speed passenger and transit applications.

Designs and materials are also advancing, Gao tells Railway Age. “Insulators for concrete ties can be a good example,” he says. “TTCI tested some types of insulators, and they failed relatively quickly due primarily to sun exposure. We discussed the situation with the suppliers. The new insulators with improved formulas performed well. Another example would be rail seat pads for concrete ties. Rail seat pads continue to improve to reduce rail seat deterioration. In addition, new rail pad designs for concrete ties have been used for quick tie repair.”

Research and development will continue to focus on system improvements, Gao says. “Improved fastening systems could not only improve fastening components, but also could reduce the maintenance of other trackwork components and train subsystems as well,” he points out. “In addition, with more advanced data collection systems and data analytics tools, site-specific data will be used to determine what to install and how and when to perform maintenance.”

Railway Age contacted fastening system suppliers to find out about their latest technologies as well as market conditions.

“The market is still very strong with our fastening products in demand worldwide,” Pandrol says. Customers are “looking for innovation, availability and easy application.” And some manufacturers, like Progress Rail, “foresee a more robust outlook” with the federal government ready to target investment in infrastructure.

Following is a roundup of supplier offerings.

Howmet’s Huck 360, C50L and BobTail fasteners can be used in a variety of track applications, such as insulated joints; gauge plates; and crossings, including RBM frogs and diamonds. They offer “uniform clamp power and unmatched vibration resistance that leads to reduced flexing and extended track and crossing life,” Howmet says. Because they don’t come lose, “maintenance intervals are greatly extended and rail lines benefit from reduced down time,” the manufacturer adds.

In conventional nut and bolt installations, gaps between nut and bolt threads may cause loosening, Howmet says. To help eliminate gaps, the company’s HuckBolt design features “full metal-to-metal contact between the swaged on collar and the pin.” The swaged connection also helps resist vibration.

In addition, HuckBolts have up to 30% more bolt cross-sectional area, and up to five times more root radius than regular bolts, depending on the bolts used, resulting in a “much stronger and more secure joint,” Howmet tells Railway Age.

The company is focusing on lockbolts in one-inch or greater diameters. The smaller diameter options had a lower value proposition so they were retired recently, according to Graham Musgrove, Manager, Marketing and Product-HFS Industrial. “We decided to refocus and repurpose that additional production capacity, engineering resources and inventory on other product lines for not only the rail industry, but also other strategic industries for us.”

While the pandemic has delayed procurements for some transit authorities due to employee availability, others have taken advantage of track shutdowns to expedite maintenance projects, General Manager, Transit Products Sarah McBrayer tells Railway Age. But the availability of raw materials, labor shortages and freight delays have all extended material procurement lead times.

Customers in the market are looking for “more high-resilient options, compact designs and corrosion-resistant coatings,” according to Sheen Fong, Director-Technical Sales, Transit Products. In addition, they want “higher resiliency products in the same footprint as existing direct fixation plating systems,” McBrayer says. “These can be in both two-anchor and four-anchor footprints.” Also important: Noise and vibration mitigation, corrosion control, ease of maintenance, and fewer assembly parts.

The company is also at work “prototyping and qualifying a high resilient DF fastener in a standard DF fastener footprint,” McBrayer says “This new product line will be ideal for use in areas where greater resilience, noise and vibration mitigation is desired such as in transit stations, on bridges and overpasses, and in residential areas. It is designed for use in new construction, as well as retrofits and maintenance replacement projects, as it offers the same anchorage locations that a standard DF fastener offers.”

Lewis Bolt and Nut Company’s most recent product launch is the G2™ (or second generation) Evergrip Screw Spike for freight railroads and transit agencies, according to George Apostolou, AVP, Sales. The G2 offers a “significant increase in fatigue resistance” due to its longer, stronger full body shank, as well as new, “tie-grabbing barbs designed to prevent back out,” he says. With this design, the fins/barbs are located lower in the screw, “allowing us to dramatically strengthen the screw spike in its most critical area, which is a couple of inches in the shank below the head of the screw spike.” One of the advantages of the G2 is its steep thread angle that allows it to be turned or driven in; it only takes 2-1/2 turns, from start to finish, to install it, according to the company. The G2 is available with a double or single head design for easy removal.

Lewis Bolt and Nut Company continues to work on incremental product improvements for customers, and has been looking internally to make its manufacturing process more efficient, Apostolou says.

“The market has become more competitive in the past few years, which is good for us and our customers,” Progress Rail tells Railway Age. “Increased competition showcases how we create new products, to create value for our customers, distinguishing us from our competition.” An example of this, the company says, is its ADFF55 fastener. Introduced a few years ago, it is “a more economical solution to our legacy high resilient DF, the Egg Type DF. The ADFF matches the noise and vibration attenuation performance of the Egg DF, while also matching anchor bolt patterns and rail seat elevations of standard, system-wide DF. This makes construction less complicated and economical.”

Progress Rail also introduced the DF Block system. “Especially useful in tunnels, the contractor no longer needs to embed rebar, form plinths, handle miscellaneous hardware, or perform the post-lifting procedure to level concrete and fill voids under the footprint of the DF units,” the company explains. “The DF Block provides a factory-finished surface, with the DF and hardware already attached as part of the system.” The contractor clips the DF Block system to the rails, sets the rails to the final position and elevation, and pours the final concrete, according to Progress Rail.

The company is currently supplying systems for projects such as the Los Angeles County Metropolitan Transportation Authority’s Westside Purple Line, and Sound Transit’s Federal Way and E130, “The Floating Bridge”; and it has material supply contracts with CTA, Washington Metropolitan Area Transit Authority, and New York Metropolitan Transportation Authority. “On the freight side, we continue to deliver long-lasting fastening solutions for maintenance and expansion of concrete tie installation across North America, as well as some international projects, which we expect to announce soon.”

“Consistency and rapid supply” are among the top customer requirements, according to Progress Rail. “With our state-of-the-art lab, we can perform multiple test programs,” the company adds. “This ensures product testing is completed on time” and allows shipments to stay on schedule.

“Progress Rail continues to invest in fastening technology solutions that add value to our customers in terms of longevity, ease of installation and reliability,” the company tells Railway Age.

Vossloh has had “sustained success” introducing transit fastening systems to the North American market over the past few years, officials tell Railway Age, and it has a “healthy” backlog of projects. Adoption of Vossloh’s captive elastic fastener among transit agencies continues.

All of the company’s fastening systems are delivered to a work site preassembled and are said to require minimal labor to complete installation after the rail is delivered.

Vossloh has developed and delivered rail and turnout fastening systems for more than 10,000 miles’ worth of high-speed track worldwide over the past 50 years. “Many projects have had unique requirements, spurring innovation and pushing the envelope for what a rail fastening system can accomplish; therefore, Vossloh is well-equipped to partner to meet their unique needs as the industry evolves in North America and the focus turns to high speed rail,” Vossloh officials say.

Among the most recent Vossloh products developed to meet railroad needs is the cellentic rail pad. “Cellentic is a micro-cellular EPDM-based elastomer with a closed-cell structure, ensuring high elasticity and load absorption within its own structure,” Vossloh officials say. “The result: very little deformation in a permanently elastic layer, reducing loads, vibrations and track maintenance. The cellentic intermediate layers have been used to optimize elasticity in ballasted and slab track.”