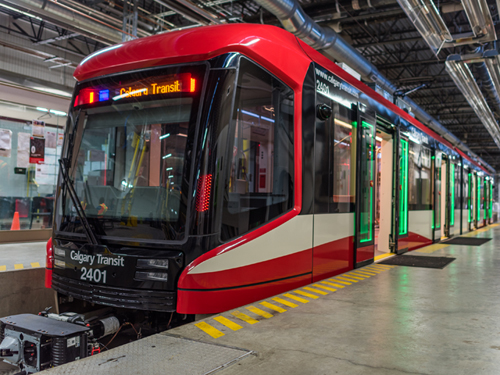 The two pioneering Canadian LRT cities, Calgary and Edmonton, located in the western province of Alberta, are both planning a major shift in their design and operating philosophies.

Both systems, from the outset, adopted high-platform boarding. Edmonton’s stations have been somewhat simple and utilitarian, for the most part, apart from those in the subway section, while Calgary’s have tended to be elaborate and expensive.

Edmonton has about three miles of subway, extending from the northwest fringe of downtown to the University of Alberta, south of the center city. This approach was quite costly, and hindered significant extension of the line for a number of years. To this day, Edmonton Transit operates one long line from the northeast to the southern sector, with a short, recently opened branch to the northwest.

Calgary, from the outset, took a different approach to contain costs, utilizing a transit mall instead of a subway in the downtown, and generally limiting tunnels to short sections. Since 1981, Calgary’s system has grown extensively, culminating in two lines that serve the northwest, northeast, western, and southern sections of the city. The system has grown from its original 8 miles to just over 37 miles.

Siemens LRVs have been the car of choice in both cities, with newer models ordered as the original models pass their 30th anniversaries.

Both cities have recently decided, since low-floor operations can be implemented at significantly lower cost, to pursue this approach on two completely new lines. These will be completely separate operations from the existing high-floor lines, although transfer will be possible. That said, both Calgary Transit and Edmonton Transit have extensions to the existing high-platform routes on the drawing boards, for future construction.

Another advantage of low-floor LRT is that it can be situated on local streets, on reserved track, with less obtrusive stations more acceptable to local residents.

Calgary, population 1.2 million, is located about 200 miles south of Edmonton. Calgary Transit will move into the low-floor era with its Green Line, extending 25 miles from North Pointe (in the north-central section of the city) to Seton in the southeast, a district that is not yet LRT-served. The operation will feature 28 stations.

The estimated construction cost, including a maintenance and storage facility, is C$4.5-$5 billion. This facility will be designed to accommodate 90 148-foot or 135 99-foot LRVs.

The Green Line alignment is predominately on a dedicated right-of-way, with at-grade crossings at minor roadway intersections, and grade separations at major roads, as well as several bridges over waterways.

The route in the southeast parallels the Canadian Pacific Railway for approximately the first segment, then runs beside roadways for the second portion. The southeast segment includes about one mile of elevated structure, two river crossings, six road bridges, three tunnels, and two underpasses.

The north-central section runs at-grade in the median of Centre Street for the bulk of its 8.7-mile length. The vertical alignment of the downtown section, including a river crossing, is yet to be approved by the City Council; it will be either underground, elevated, at-grade, or a combination.

The existing high-floor system will not physically connect with the Green Line for regular operations. However, there will be a station on the existing Seventh Avenue Transit Mall, allowing passenger connections between the current Blue and Red lines.

The Green Line will serve Calgary’s dense high-rise business section, in addition to outlying residential neighborhoods, entertainment and cultural destinations, industrial districts in the southeast and a small airport.

Funding for the capital cost is expected to be shared equally between the Federal, Provincial and Municipal governments. Ottawa has pledged funding to a maximum of C$1.53 billion Calgary has agreed to a like amount, subject to the province contributing its share. Alberta has not yet made a formal pledge to do so, although the Premier (head of the provincial government) has publicly stated that it could be furnished through a recently introduced carbon tax.

The municipal government funds operation of public transit in Calgary, with 50% coming from property taxes and the balance from transit fares, advertising revenues and parking fees.

The Green Line will be the first new LRT line (as opposed to extensions) for Calgary since the 1980s.

For its vehicle requirements, Calgary Transit will produce a performance-based specification, rather than specifying an actual car. In this way, the system obtains the performance that it needs, while still allowing suppliers to develop a specific LRV that best utilizes existing technologies and systems. It is felt that this approach gives the optimum blend of performance and cost-effective vehicle development.

The track/signals/power systems and LRVs will have interdependencies. As a result, Calgary Transit engineers will specify many elements of vehicle performance. That said, it is unlikely that they will recommend that a specific car used elsewhere be purchased for Calgary, in accordance with supply/procurement policies. The LRV order will be of a magnitude that should attract significant response and competition from manufacturers. 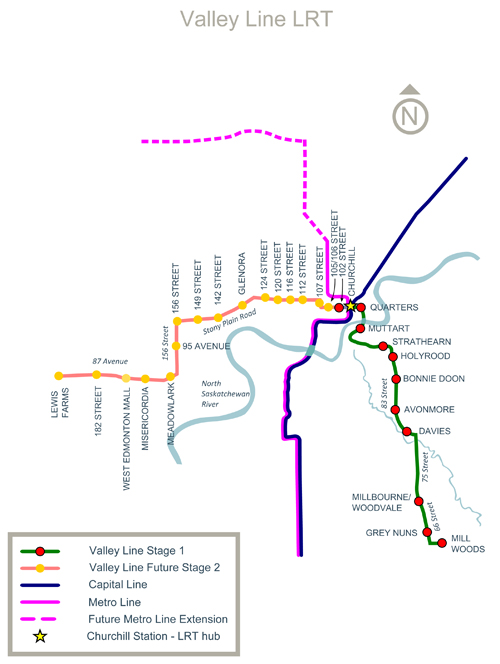 The city of Edmonton, which operates the northernmost LRT system in North America (the first section opened 1978, as the first modern LRT in Canada or the U.S.), has approved construction of the initial segment of its low-floor Valley Line. This will represent the city’s first use of this technology. At present, Edmonton Transit operates one long line, the Century, that has been extended in stages, from Clareview in the northeast to Century Park in the south. There is also a short two-mile branch to the northwest.

The main route is a blend of railway right-of-way, tunnel, side-of-the-road, off-street private right-of-way through a sports complex, and center reservation in an arterial road.

The consortium of TransEd Partners has been chosen, following an 18-month procurement process, to design, build, operate and finance Stage One of the Valley Line, under a P3 agreement. Proposals were received from three international teams. The TransEd team includes ARUP, Bechtel, Bombardier, Ellis-Don, Fengate Capital Management, IBI Group and Transdev. Opening is scheduled for December 2020.

The complete Valley Line is estimated to cost C$1.8 billion. Financing is being split three ways, as follows:

• Province of Alberta, C$600 million. Of this, approximately C$274 million will be from Green Trip funding; C$176 million as an interest-free loan; and C$150 million to match federal Building Canada Plan funding.

Stage One of the Valley Line takes it from 102 Street in downtown Edmonton to Mill Woods, in the far southeast section of the city, for a distance of 8.1 miles. This section will be built first, due to a required operations and maintenance facility to be constructed near Whitemud Drive.

Both segments will operate chiefly on city streets, in reserved track. In the center city, the line will also be street-running. It will connect, via escalators and stairs, with the existing underground LRT at Churchill Station. There will not be a track connection between the two distinct operations.

The completed Valley Line will be 16.75 miles in length. Total travel time is one hour, or 30 minutes for each segment. Trains will operate on five-minute headways during peak periods.

Phase One will have, in total, 11 street-level stops and one station (Davies); a further 14 street stops and two stations are planned for Phase Two. Park-and-ride facilities will be provided. Phase One also requires a bridge over a waterway. It will provide a second deck below the LRT portion for pedestrians and bicyclists.

Edmonton Transit notes that its existing LRT system, comprising 15.1 miles, may be described as a “suburban” system, while the Valley Line will be an “urban” operation. The city’s Network Plan calls for a change in approach to LRT building that improves connectivity between the LRT and city life for passengers—in short, “neighborhood” lines.

Plans remain on the books for extensions to the high-floor operation, to provide seamless service whenever possible. The most likely candidate would seem to be a lengthy route to the city line in Edmonton’s northwest section, an area that LRT has yet to reach. This could ultimately cross the city limits into the adjoining community of Saint Albert. A route has been approved by Edmonton Transit and City Council, but funding has not.

An extension to the main LRT, which is designated the Century Line, to the south city limit, also has alignment approval, but not funding.

A short segment about two miles long, to the Northern Alberta Institute of Technology, was opened recently from Churchill Station, running primarily on the surface. However, there have been major technical problems in merging its signal system with that of the existing LRT.

The existing tunnel through downtown Edmonton, part of which dates from 1978, could face capacity issues in the near future. Thus, running the Valley Line on surface streets will help to avoid this potential problem.

Edmonton’s goal is to extend LRT to all sectors of the city by 2040. New lines will likely be low-floor, while extensions to the existing system will be high-platform.

The Alberta capital is Canada’s fastest growing city. The city is expected to grow by 500,000 people in the next 30 years. LRT is regarded as being vital to Edmonton’s success.