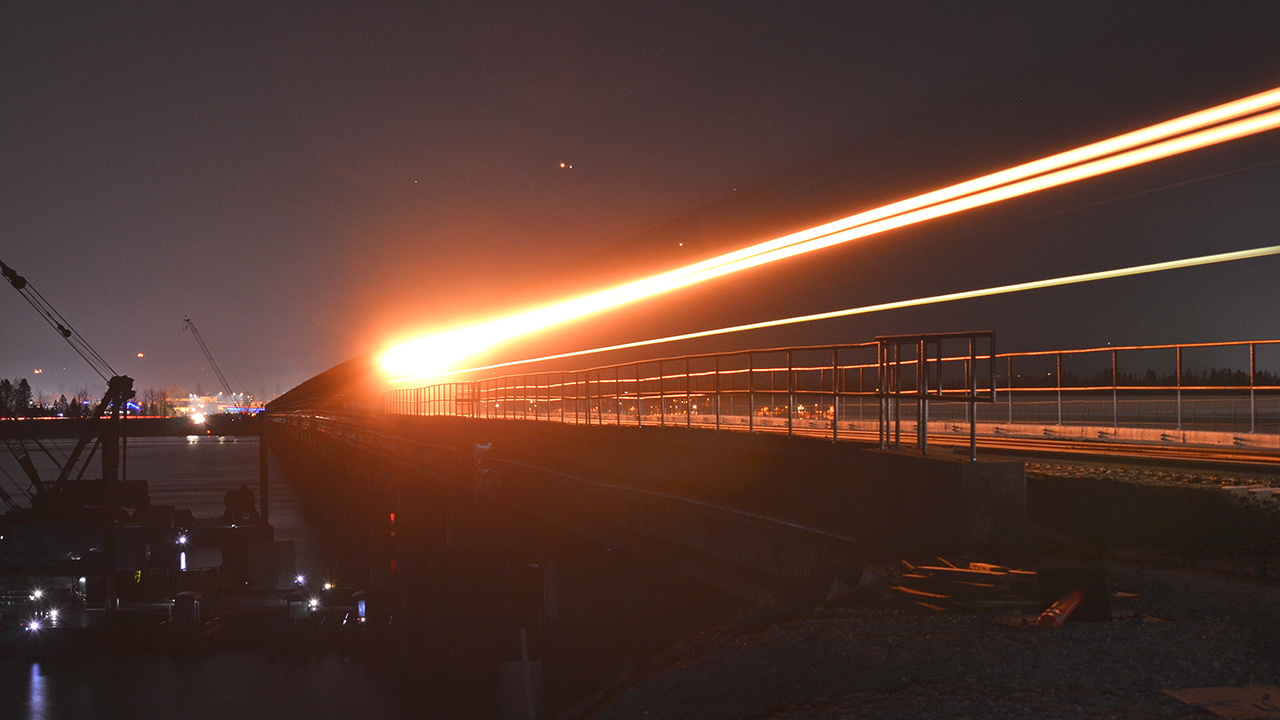 Fifty years after Burlington Northern consolidated the traffic of two predecessor routes onto a single line featuring a nearly mile-long bridge near Sandpoint, Idaho, successor BNSF has opened its long-anticipated second bridge. The first train to officially cross the new structure was an empty coal train at 9:00 p.m. on Nov. 20, 2022.

At 4,873 feet in length, BNSF’s new bridge across Lake Pend Oreille parallels an existing bridge that has been in service since 1904, and will help eliminate a single-track bottleneck that had become increasingly detrimental to traffic flow on BNSF’s Northern Corridor. The new bridge is comprised of 49 spans, 224 precast concrete girders and 6-pile bents totaling approximately 55,000 feet of 36-inch pipe pile.

Despite the new bridge being operational, it will be months before trains are seen passing each other side-by-side on a regular basis over Lake Pend Oreille. BNSF has taken the older bridge out of service in order to resume renovations that were started more than a decade ago. Lena Kent, General Director Public Affairs at BNSF, says, “The maintenance will consist of replacing all 59 of the remaining original 1904 bridge spans, including the no-longer-operational swing span. A number of spans, as well as all of the piers outside the navigation channel, were replaced in previous projects. The few remaining piers will be getting some minor reinforcement above the low-water line.”

While improvements are being made to the older bridge over Lake Pend Oreille, BNSF will continue site preparation for a second main track that will run approximately one mile from the new bridge to Sandpoint Junction, where BNSF connects with Montana Rail Link. The historic Northern Pacific depot in Sandpoint, which serves as Amtrak’s only passenger stop in the entire state of Idaho, will see its platform reconfigured to make room for the second main track. After all bridge and track work is completed in Sandpoint, BNSF will have roughly 53 miles of double-track main line from there to Otis Orchards, Wash., on the eastern edge of Spokane.

Some might say that BNSF’s second bridge across Lake Pend Oreille and the extension of double track to Sandpoint Junction have been a half century in the making. Following the 1970 merger that formed Burlington Northern, various route segments from the Midwest to the Pacific Coast that were deemed redundant were either sold off, leased (in the case of MRL) or abandoned. Between Spokane and Sandpoint, BN phased out use of the former Great Northern main line as a through route, leaving portions of it in place only for branch line service. In 1972, BN completed major bridge and track projects in Spokane and Sandpoint that channeled all through traffic from either direction onto one line between those two cities: the former Northern Pacific, which earned the nickname of “The Funnel.”

BN made basic improvements to The Funnel’s capacity during the 1970s and ’80s by lengthening sidings or creating short segments of double track. After BN merged with Santa Fe to become BNSF, major doubletracking projects on The Funnel were completed in 1998 and 2017, leaving just two short sections of single-track main: the two miles between East Algoma and Sandpoint Junction, and approximately four miles between Otis Orchards and Irvin, Wash. Initial fill and grade work for the Otis Orchards-Irvin second main was done in 2020, but BNSF won’t begin major work there—which will include a second bridge over the Spokane River—until some time after the Sandpoint project is completed.