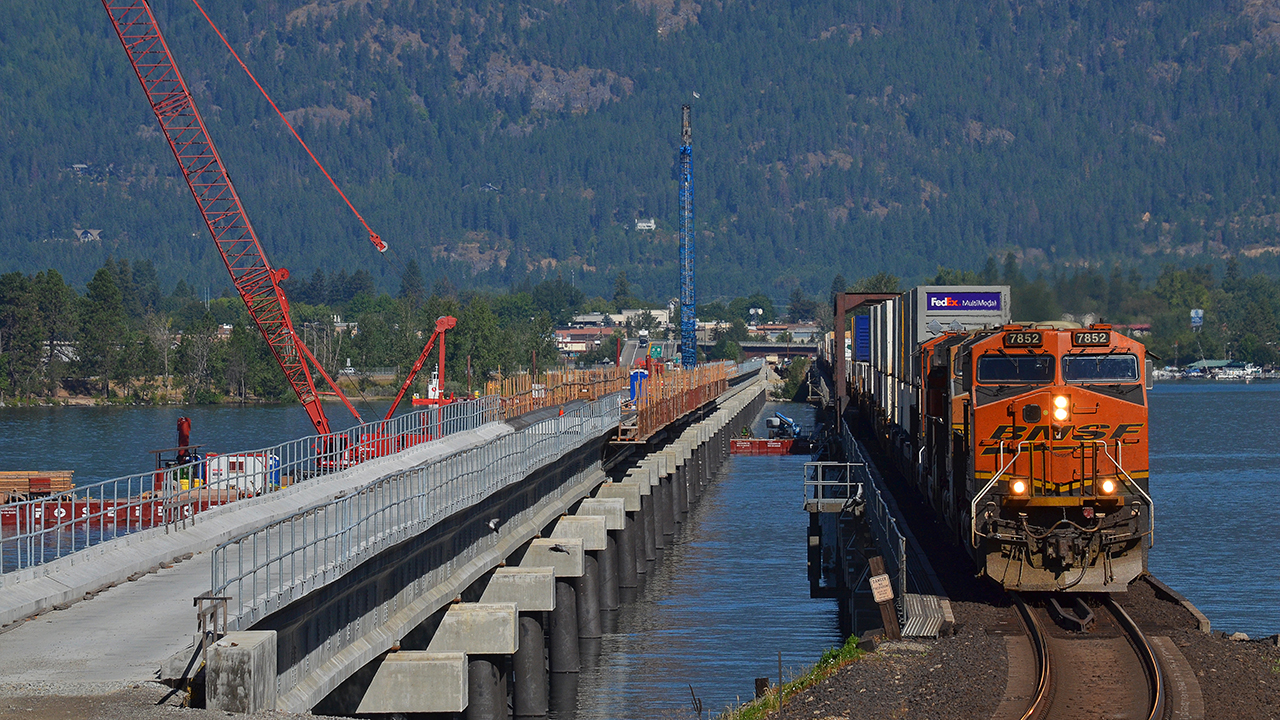 Domestic containers and trailers bound for the Pacific Northwest cross BNSF’s existing bridge across Lake Pend Oreille on Aug. 14, 2022, just days after the final deck girder section was installed on the adjacent bridge that’s been under construction since 2020. BNSF says tracklaying is scheduled to begin in October. All photos: Bruce Kelly

Contractors working for BNSF Railway installed the final deck girder segment on the nearly one-mile-long bridge across Lake Pend Oreille near Sandpoint, Idaho, during the first half of August. Under construction since 2020, the new bridge parallels BNSF’s existing bridge that was completed in 1904, and is part of a $100 million project aimed at improving traffic flow on the eastern end of BNSF’s busy corridor between Spokane, Wash., and Sandpoint. The project also includes a pair of smaller bridges in the city of Sandpoint and roughly two miles of second main track.

With the major bridge components now in place, the next phases of the project should advance quickly. Ben Wilemon, External Corporate Communications Manager for BNSF, says, “All girders on the new bridge over Lake Pend Oreille have been set. We have plans to proceed with pouring bridge decks and associated work. The bridges over Sand Creek and Bridge Street [within Sandpoint city limits] are complete.” According to Wilemon, BNSF’s current timetable calls for tracklaying to begin in October.

After the second main track is installed between East Algoma and Sandpoint Jct., trains will move more freely to and from BNSF’s Northern Corridor toward Chicago and Montana Rail Link’s route across southern Montana. By that time, it’s possible that MRL will be fully integrated into the BNSF system. MRL announced earlier this year that it plans to end the long-term lease of its rail line from BNSF, a lease that began in 1987 under BNSF predecessor Burlington Northern Railroad.

Since 2008, BNSF has performed upgrades to its existing bridge over Lake Pend Oreille, installing new piers and deck girders as needed. The second bridge over Lake Pend Oreille, started in March 2020, will allow that process to continue with less interference to train traffic. BNSF says it “has identified maintenance work to occur [on the existing bridge] once the new bridge is operational, estimated for 2023-2024.”

Throughout construction of the second bridge at Sandpoint, recreational boating on Lake Pend Oreille has been unaffected, and a new pedestrian tunnel was built near the main work site in order to maintain public access to a popular beach and recreation trail.

Completion of the new bridge and second main line at Sandpoint will leave only one small section of single track—roughly four miles in length—to be resolved on BNSF’s Spokane-Sandpoint route. Adding a second main between Irvin and Otis Orchards, Wash., will require the construction of an additional bridge over the Spokane River. Preliminary grading and fill work has been done, but major work to close this remaining single-track choke point is not yet under way.