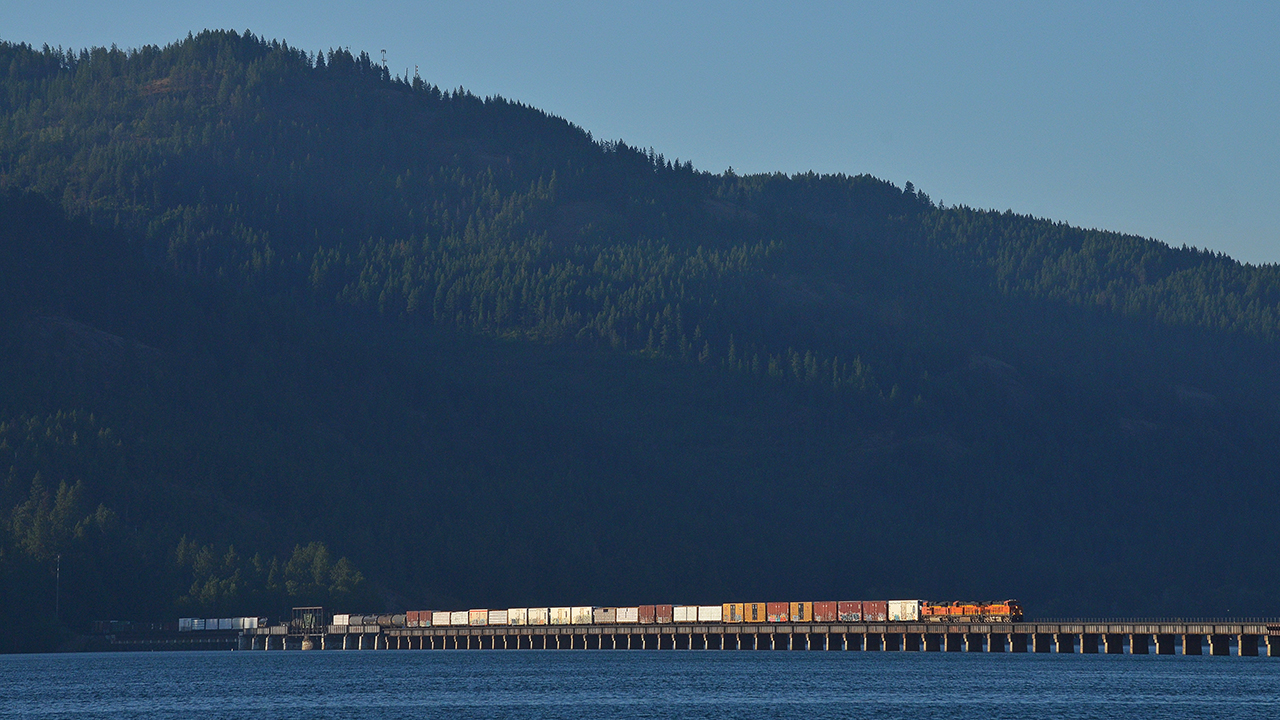 The U.S. Coast Guard on Sept. 5 issued a FONSI (Finding Of No Significant Impact) on BNSF’s plan to construct a new bridge across Sand Creek and Lake Pend Oreille in Idaho, supplementing an existing structure and eliminating a bottleneck. 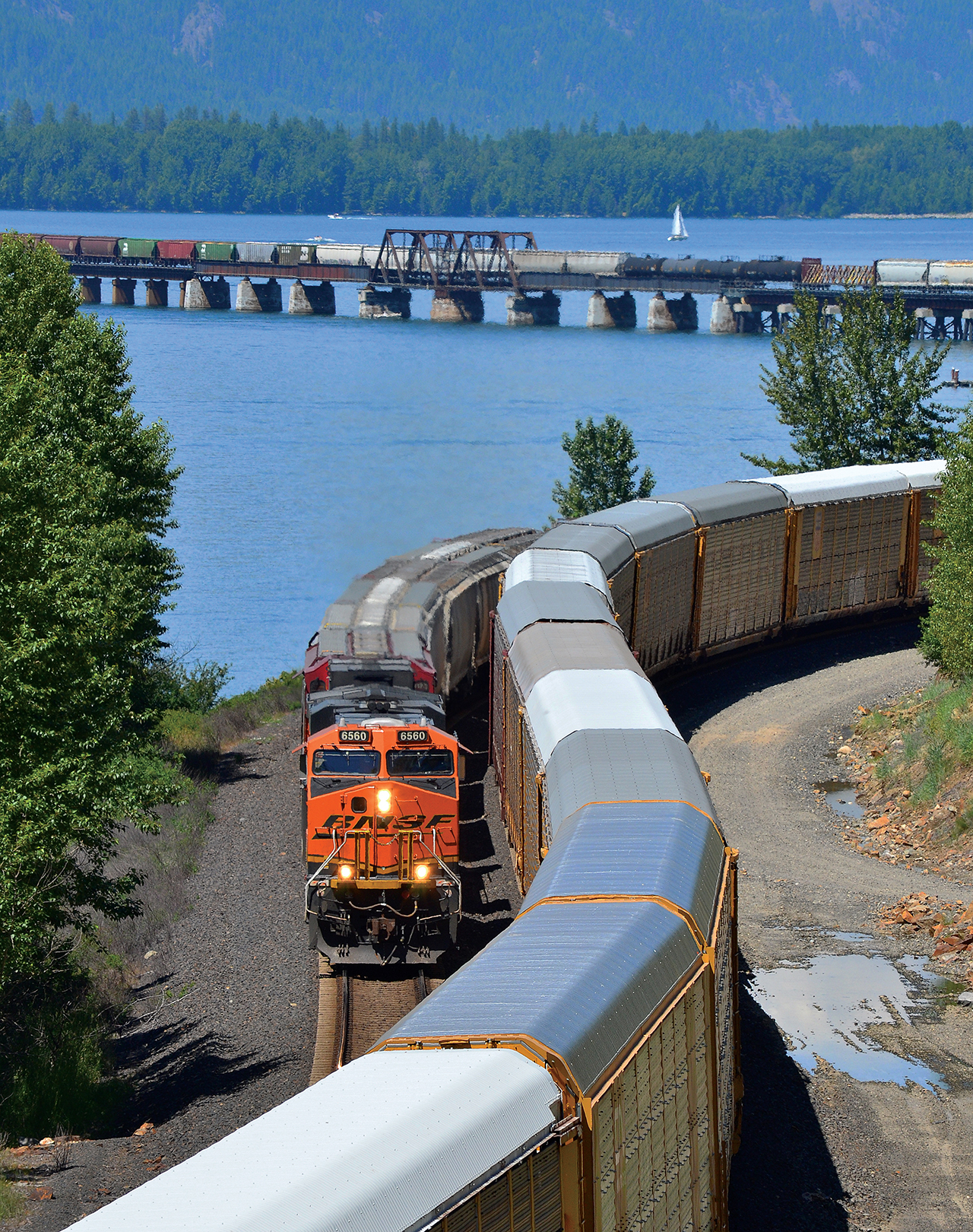 In June 2014, an eastbound BNSF vehicle train waits at East Algoma, Idaho, while a westbound manifest crosses the nearly mile long single-tracked bridge over Lake Pend Oreille. Sandpoint is on the other side. Bruce Kelly photo.

In Environmental Assessment (EA) report, the Coast Guard said BNSF’s plan to prevent derailments and Bonner County’s Lake Pend Oreille Geographic Response Plan addressing various types of spills has been incorporated into the project’s final environmental assessment. As well, “Current use of load profiling and dust suppressants has been shown to achieve at least an 85% reduction in fugitive coal dust and allow only trace amounts to be lost in transit, which are well below levels that could be harmful to human or ecological health.”

As to concerns over increased rail traffic, the Coast Guard said the maximum capacity of the BNSF line through Sandpoint, Idaho and across the lake is approximately 79 trains per day, although average traffic is approximately 60 trains per day. The EA further noted that the project does not add any origin or destination facilities, but would improve efficiencyl. “The market conditions influencing rail traffic growth in the study area exist without construction of a second main line track and associated bridges. Adding a second main line track along this segment would not increase overall capacity of the rail line because there are other constraints on the main lines leading into the Sandpoint and Lake Pend Oreille area,” the final EA said. 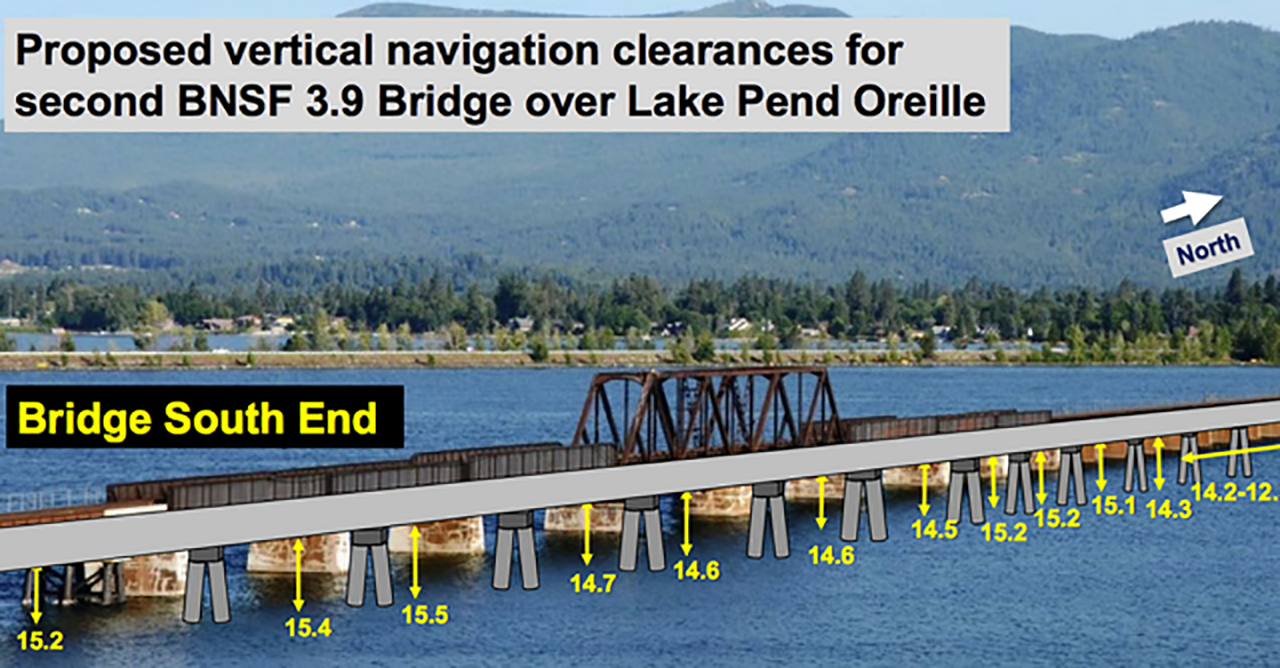 The Coast Guard also ruled that the EA has been determined to be the “appropriate form” of environmental review.

“BNSF appreciates the thoughtful comments and constructive dialogue that was a part of this process. This project will reduce congestion and help move our current freight traffic and future volumes more efficiently; this benefits all the products we carry and the passenger trains that run on our main line,” BNSF spokeswoman Courtney Wallace told the Bonner County Daily Bee. She added that BNSF expects to begin upland work on railroad right-of-way between Sand Creek and Dog Beach. The work includes constructing site access of U.S. Highway 95 and building temporary and permanent trails that will keep the bike and pedestrian path open during construction.