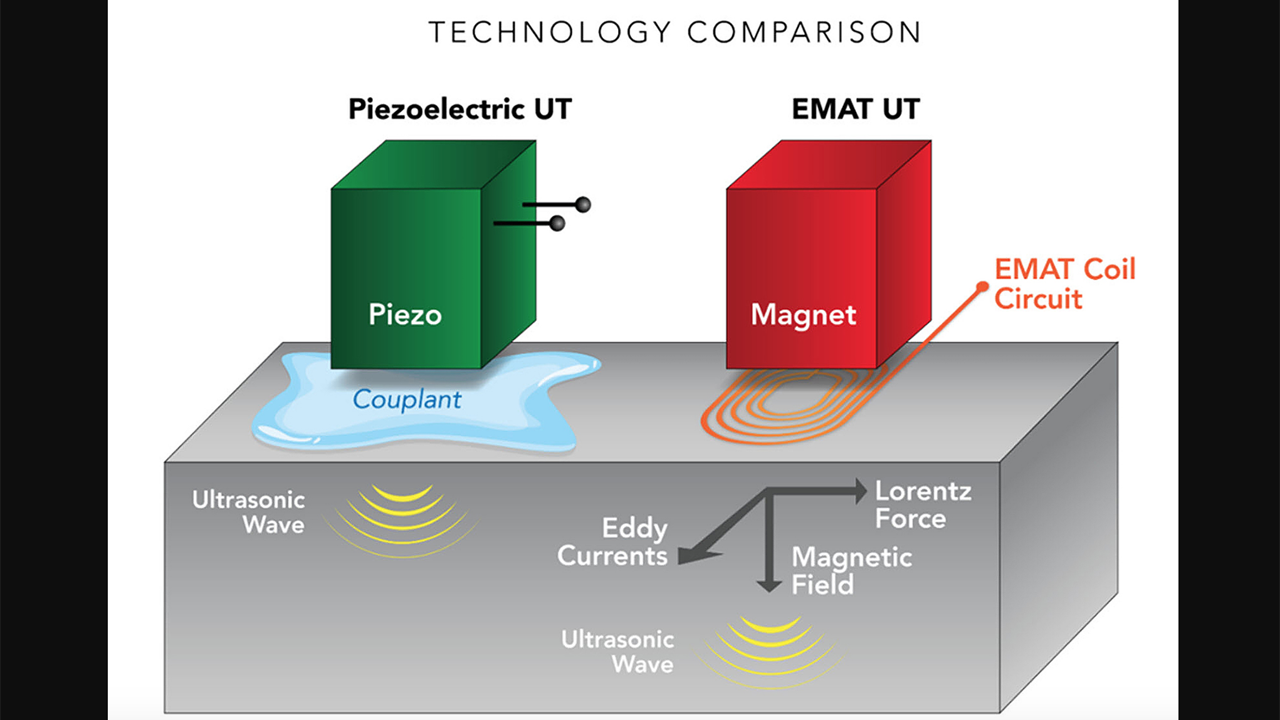 Preliminary tests, sponsored by the Association of American Railroads, were conducted in a laboratory setting using an off-the-shelf EMAT sensor. The sensor demonstrated excellent detection capability with a good signal-to-noise-ratio (SNR) for the wheel samples with internal defects.

An EMAT is an ultrasonic technique that generates sound using electromagnetic induction. Because the ultrasound is generated directly within the material adjacent to the transducer, this technique does not require any couplant to perform the inspection. EMAT ultrasound generation is based on the interaction between the magnetic field created by a magnet and the eddy currents induced in the test piece by a coil circuit. Together, the magnetic field and the currents create a Lorentz force or magnetostriction within the material, causing the vibration of the material’s lattice, and thereby generating ultrasonic waves. Figure 1 (above) shows the comparison of the EMAT principle with the conventional piezoelectric-based ultrasonic testing (UT) principle. Depending on the sensor’s design, the wave type and wavelength can be varied. The same or a similar sensor receives a return signal and provides a very precise measurement of the surface acoustic wave velocity in the test piece.

Two cut-out pieces from Class C wheel rims (17 inches long and 3.25 to 4.0 inches thick) were considered for proof-of-concept testing. Each wheel sample contained internal subsurface fatigue cracks. TTCI determined the locations and sizes of the internal defects using a conventional UT NDE method, but did not mark the wheels or reveal the defect locations prior to using the EMAT. A single-channel, off-the-shelf EMAT sensor was used for the feasibility demonstration. This EMAT sensor was operated in normal beam shear horizontal (SH) wave mode at a center frequency of 1,500 kHz. This configuration proved to be sufficient to penetrate the steel wheel material. Since the velocity of shear waves is approximately half that of longitudinal waves, the wavelength of this transducer is similar to a 3 MHz longitudinal wave piezoelectric-based ultrasonic transducer. For future test systems, the EMAT sensor design would need to be optimized for enhanced performance and optimal coverage.

Amplitude vs. time/distance plots, or A-scans, were captured at various points in the wheel samples to demonstrate the signal quality. An ultrasonic calibration was conducted at 80% of the full screen height (FSH). The 4:1 SNR corresponded to 20% FSH of the recorded ultrasonic signals. The backwall reflection occurred at a depth of 1.7 inches and had an ultrasonic reflection/strength of about 6% FSH. The noise level in the A-scan was approximately 3% to 5% FSH. Strong reflections (60% to 100% FSH) were observed at the spots containing subsurface fatigue cracks, but the depths of reflection varied slightly in all defective locations.

For an in-track wheel inspection system, the pulser and sensor configurations will need be optimized to reduce the effect of the blind zone (for EMAT sensors, a typical blind zone is between 2 and 4 µs or 0.128- to 0.256-inch deep from the surface), and depth estimation algorithms (based on reverberations) could be used to provide accurate depth measurements for defects found within the blind zone. However, defects that are greater than 0.12- to 0.16-inch deep can be seen by subsequent reverberations of the signal in the EMAT approach. These reverberations are caused by the sound bouncing back and forth between the defect and the surface of the material. The standard approach for measuring the actual depth of the shallow defects in the blind zone for the EMAT is to use special algorithms to measure the distance of the peak-to-peak amplitude on these reverberations.

These initial test results were promising and demonstrated the capability of the EMAT technology to detect internal wheel defects (subsurface fatigue cracks). Based on this assessment, it can be concluded that the EMAT technology can be adapted for complete wheel inspections with a sensor array to cover the complete width of the wheel tread and the wheel circumference in order to perform in-line high speed inspections without the need for couplant handling and delivery systems, as required for piezoelectric-based ultrasonic inspection systems. However, the effect of instrument lift-off (sensor-to-wheel tread distance) must also be understood. TTCI is currently working with the EMAT supplier to help facilitate the development of this technology using array EMAT sensors for in-motion inspection. The results from this work will be reported in future publications.