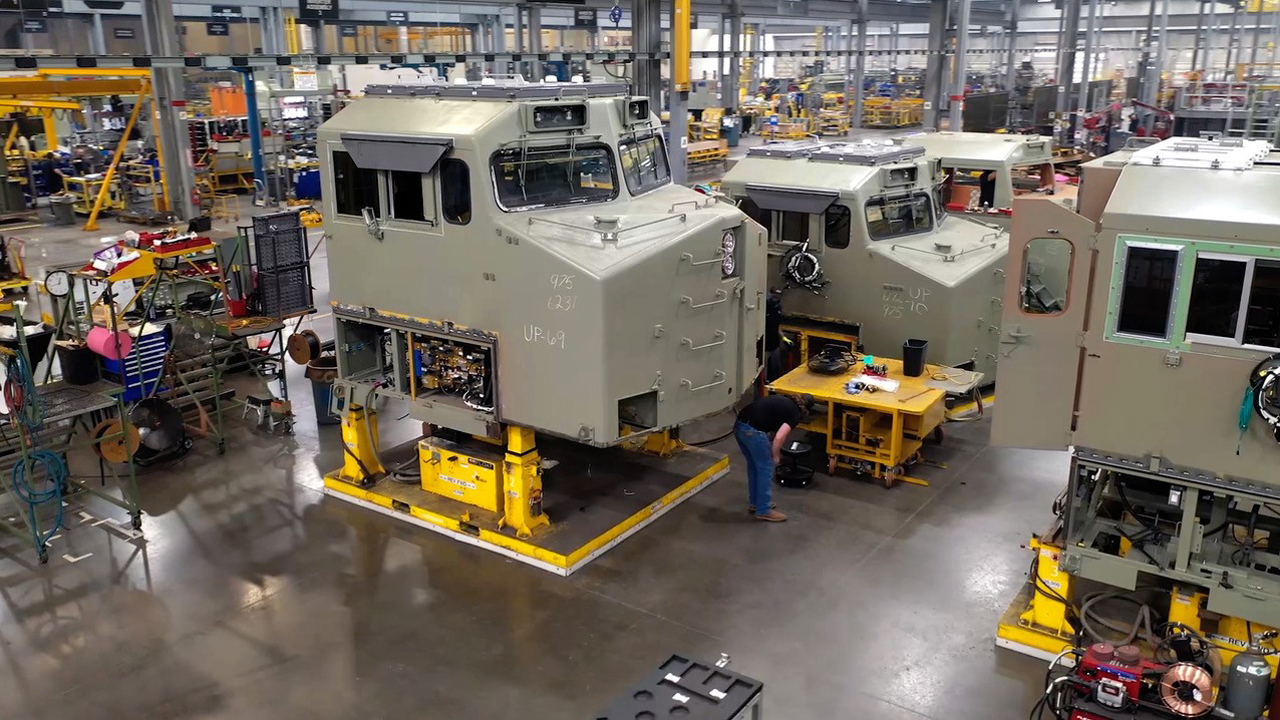 Pictured: Main cab for UP modernized locomotive at Wabtec’s Fort Worth plant. (Photograph Courtesy of Wabtec)

Union Pacific (UP) has selected Wabtec to modernize 600 locomotives in a deal worth more than $1 billion, the manufacturer reported on July 27.

This is Wabtec’s third major power-upgrade order from UP since 2018, covering more than 1,030 locomotives upon completion in 2025.

Under the new order, Wabtec will upgrade 525 of UP’s AC4400 and AC6000s, as well as 75 Dash-9s in what it called “the largest investment in modernized locomotives in rail industry history.” They will feature the FDL Advantage engine upgrade and Modular Control Architecture, a next-generation controls technology that is said to be applicable throughout Wabtec’s locomotive installed base. The modernizations will not only extend locomotive life, but also provide such benefits as a fuel efficiency improvement of up to 18%; a more than 80% increase in reliability; and a haulage ability increase of more than 55%, according to Wabtec. In addition, it said, each upgraded unit will reduce approximately 350 tons of carbon per year; and UP will realize approximately 210,000 tons in annual emission reductions from the total modernization.

The work will take place at Wabtec’s U.S. plants, with deliveries expected to begin in 2023. The manufacturer said 70,000 tons of steel would be reused and recycled, which is the equivalent of more than 51,000 passenger cars.

“Union Pacific is taking thoughtful, deliberate steps to reduce our environmental impact and to help our partners improve theirs,” said Lance Fritz, Chairman, President and CEO of UP, which seeks to reduce absolute Scope 1 and 2 greenhouse gas (GHG) emissions by 26% by 2030 from a 2018 baseline, and is on a path to net-zero emissions by 2050. “Wabtec’s modernization program helps make our existing fleet more fuel efficient, capable and reliable. The resulting increased tractive power enables us to move more freight with fewer locomotives, which improves efficiency and reduces emissions.”

“Modernizations are a game-changer for our customers offering the ability to realize significantly more value out of existing locomotive assets,” Wabtec President and CEO Rafael Santana said. “By customizing these solutions for our customers and installing state-of-the-art technology, we are helping our customers realize outcomes including increased tractive effort, fuel efficiency, reliability, and adhesion, which reduce maintenance, repair, and overhaul expenses. These fleet benefits will support Union Pacific’s sustainable service improvements and long-term growth strategy.”

“We estimate that the just-announced agreement with UP could mean $360 million of revenue per year for Wabtec for the next three years,” said Cowen and Company Transportation Analysts Matt Elkott. “At least 60% of that could be incremental to expectations, resulting in incremental annual revenues of at least $216 million for 2023-2025 and annual incremental EPS accretion percentage in the high single digits to low teens. We note that modernizations are about half the revenue of a new locomotive for Wabtec, but at much higher margins. As the North American new-build market is likely to continue to be anemic, we expect mods strength to continue, with more Class I‘s possibly signing new agreements. Wabtec is the largest freight locomotive builder, followed by Caterpillar (Progress Rail/EMD). The two form an effective duopoly in North America.”

In related developments, four UP locomotives produced by Wabtec are now running on 100% biomass-based fuel to determine the feasibility of using an 80% renewable diesel and 20% biodiesel blend—part of the railroad’s ESG initiative called “Building a Sustainable Future 2030”. Also as part of that initiative, UP in January 2022 ordered 10 battery-electric locomotives apiece from Wabtec and Progress Rail, a Caterpillar Company, for yard testing; the “green” units plus yard infrastructure upgrades are slated to exceed $100 million.

Additionally, in March 2022, Wabtec was selected to modernize 330 GE Dash 9-44CW units for Norfolk Southern, bringing Wabtec’s total number of power upgrades for the Class I to more than 950 upon completion of work in 2025. CSX teamed with Wabtec in June 2021 to modernize locomotives across its fleet, boosting their fuel efficiency and reducing emissions.