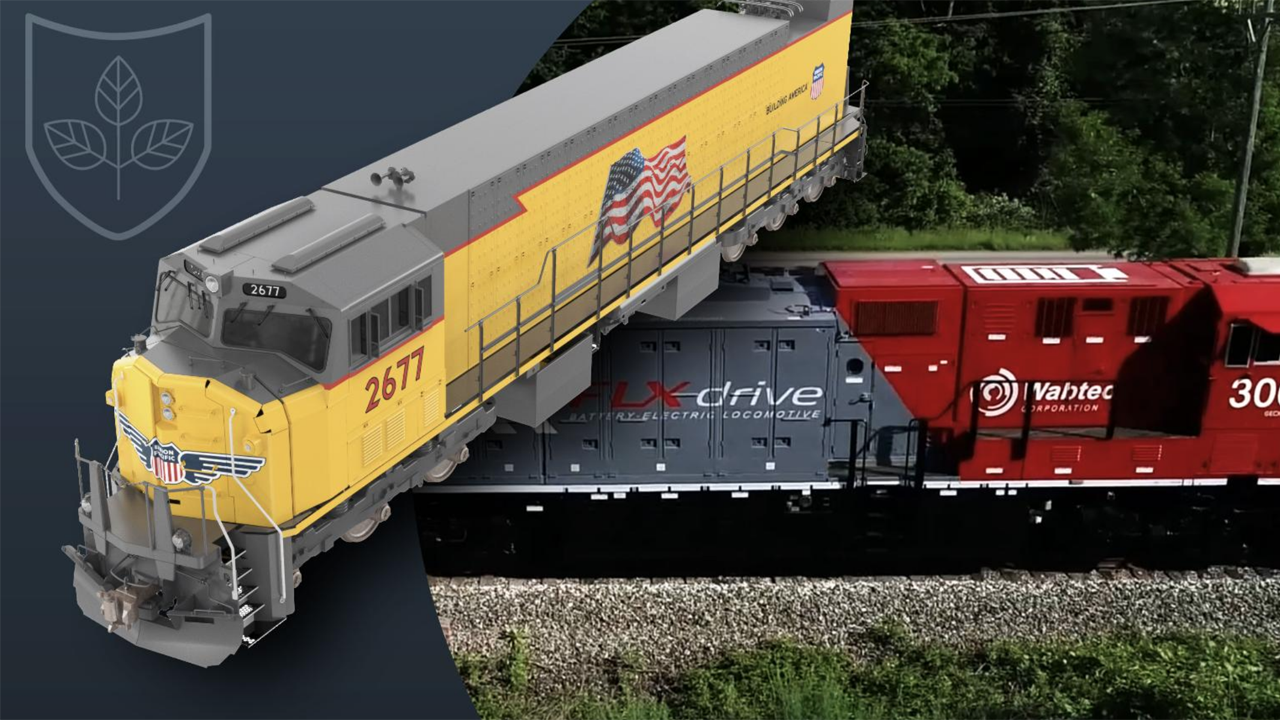 UP said its order with Progress Rail and Wabtec represents “the largest investment in battery-electric technology by a U.S. Class I railroad.” (Photo Courtesy of UP)

Union Pacific on Jan. 28 reported ordering 10 battery-electric locomotives apiece from Progress Rail, a Caterpillar Company, and Wabtec Corp. for yard testing; the “green” units plus yard infrastructure upgrades will exceed $100 million and support the Class I railroad’s efforts to reach net-zero emissions by 2050.

UP said the acquisition represents “the largest investment in battery-electric technology by a U.S. Class I railroad.” Deliveries are expected to begin in late 2023 and run through late 2024.

The Progress Rail EMD® Joule and Wabtec FLXdrive locomotives will operate in California and Nebraska rail yards, where they will be performance-tested in cold and warm weather to help identify their “capabilities and challenges for broader deployment,” according to UP.

“The hope is that lessons learned from this test phase will get us closer to technology that could be used reliably for long-haul service,” UP AVP Labor Relations and Sustainability Maqui Parkerson explained on the Inside Track section of the railroad’s website. “It certainly will help inform the industry about alternative-propulsion methods for over-the-road service, which must be interoperable.”

“Battery power is an ideal solution to reduce the environmental impact and costs of yard operations,” Wabtec President and CEO Rafael Santana said. “Using the [Wabtec] FLXdrive in the rail yard can significantly improve local air quality, as well as reduce noise by up to 70% for neighboring communities.” Wabtec’s approximately 2.5-MWh FLXdrives are each powered by 7,000 battery cells; UP anticipates that the 10 on order will enable it to eliminate 4,000 tons of carbon annually from yards.

“We are pleased to supply our EMD Joule locomotives to Union Pacific, representing our largest battery-electric locomotive order to date,” Caterpillar Chairman and CEO Jim Umpleby said. “At Caterpillar, we’re continuing to invest in new products, technologies and services to support our customers during the energy transition, helping them achieve their climate-related goals as they build a better, more sustainable world.”

One of the 20 new UP units will be funded, in part, by a subaward from the Port of Los Angeles, according to UP. The Port in December received a $2.025 million Diesel Emission Reduction Act (DERA) grant from the U.S. Environmental Protection Agency to replace an older switcher with a battery-electric unit.

The new switcher is slated to run in the South Coast Air Basin rail yards. “The funds will be combined with $2,475,000 in leveraged funds” from the Port and UP, according to EPA.

“Our work with the Port of Los Angeles will help us cut emissions in the South Coast Air Basin, which includes four counties in Southern California,” said Beth Whited, UP Executive Vice President and Chief Human Resource Officer, who oversees ESG efforts. “This work also will help our customers realize the benefit of moving goods by rail, reducing emissions by up to 75%.”

“We’re committed to actions that reduce Union Pacific’s environmental footprint as we work toward our ultimate goal of reaching net-zero emissions by 2050,” UP Chairman, President and CEO Lance Fritz said. “These investments will contribute to further developing this important technology and providing industry-wide benefits.”

In related developments, UP in August 2021 announced that its EMD 710 and 645 series locomotives could run with a higher biodiesel fuel blend content; Progress Rail approved using up to 20% biodiesel blend in its units.