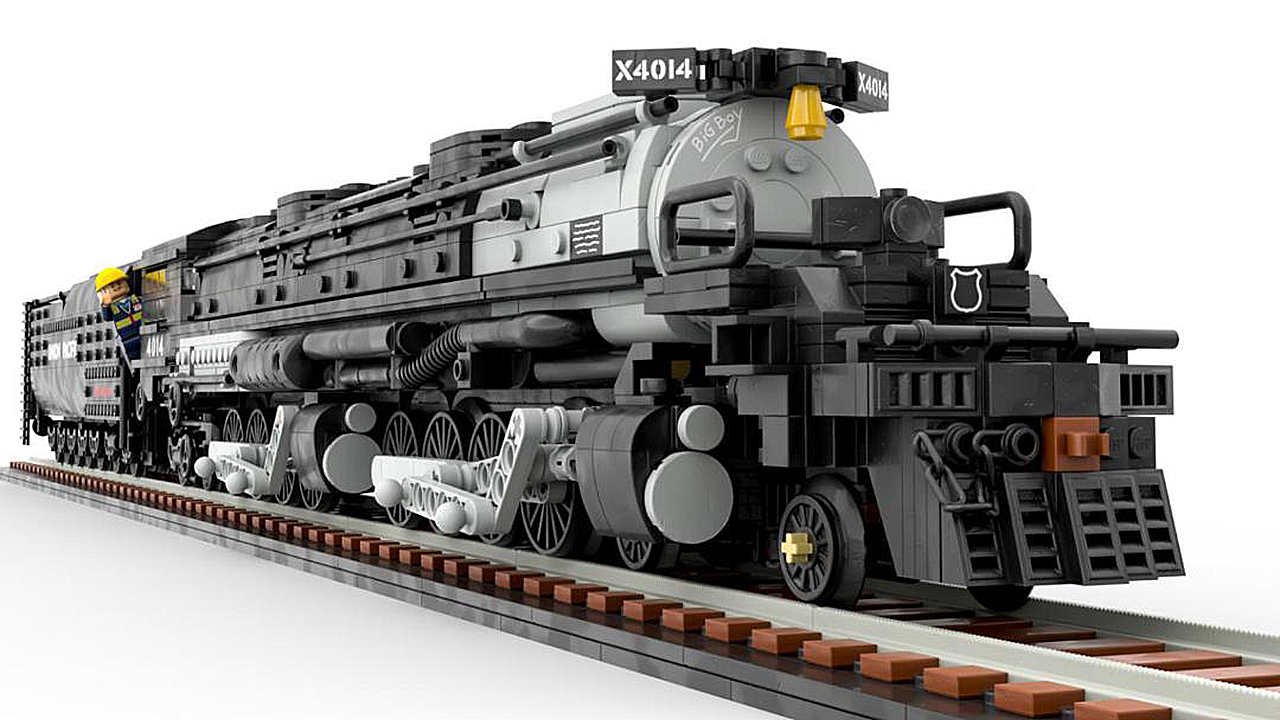 My son Craig is an automotive technician specializing in German high-performance cars (BMW M Class, Mercedes AMG, Porsches, etc.—you get the picture.) He also owns a new Royal Enfield Continental GT motorcycle he has been modifying, and he and one of his buddies have started buying older rides to spruce up and modify. Craig got his start in his chosen field as a child, building Legos. He still collects and builds them.

Many adults who build Legos, especially those who create their own, are kindred spirits. Thousands of miles away from my son’s shop in New Jersey, in Denmark, is one of them: Lasse Hvidtfeldt, who with 2,656 Lego bricks requiring 762 instruction steps and 300 hours, designed and built a three-foot-long replica of Union Pacific Big Boy No. 4014, the largest steam locomotive ever built, now part of UP’s heritage fleet.

Hvidtfeldt, who studies communication design at Design School Kolding in Denmark, and his creation were recently featured on the community section of UP’s website. “I just felt super inspired by this steam engine,” he says. “It is very iconic, unlike a lot of newer machinery. I really enjoyed figuring out the little details and functional parts. I also enjoyed the personal achievement of building something from scratch that ends up being so cool.”

“Hvidtfeldt’s fascination with trains came naturally as a young boy,” UP notes. “His grandfather worked for the Danish State Railways, and his dad used to take him to train museums and model train conventions. His father even had a model train layout with a Big Boy, which Hvidtfeldt used as a building block for his model.

“Before starting his own Lego design, Hvidtfeldt had to do a lot of research. His goal was to be as detailed as possible, capturing the windows, the tanks on the sides, the boilers, the gray areas before the cab, the shape of the tender, the interior of the cab, and all the mechanical elements on 38 wheels. He then gathered as many Lego bricks as he could. He broke down several of his older sets and ordered about 1,500 more pieces, including some hard-to-find wheels that have only appeared in a handful of Lego sets. It was important to Hvidtfeldt that the valve gear was functional and the locomotive fit standard Lego tracks.”

Hvidtfeldt says that he “really wanted the wheels to work realistically,” but that “it was also the most difficult part, as Lego doesn’t make many flat parts that would work in that area.”

As his Big Boy started taking shape, Hvidtfeldt posted photos on LEGO IDEAS, a website that allows users from all over the world to post photos of their creations and vote on their favorites. Lego considers models that receive 10,000 votes for production. Hvidtfeldt’s Big Boy reached 10,000 votes early this year, but Lego isn’t going to produce a commercially available kit. That’s disappointing. Sorry Craig, there goes your Christmas present!

(If I were UP’s CEO, I’d cash out some of my stock options and pay Lego to produce the darn thing, with the understanding that a percentage of the profits be donated to a UP-sponsored charity. I might even require all new UP management trainees to build one as a test of patience, ability to follow directions, mental acuity, and hand-eye coordination. But that’s just me.)

But Hvidtfeldt is not giving up. UP reports he “is working on a new, more detailed version of the famous steam engine. The new design will be smaller, but it will have more detail and its firebox will light up. It also will have a newer motor, with its movement controlled by a phone app.”

“The LEGO model is just as impressive as the real thing,” Hvidtfeldt writes. “My number one priority from the beginning has been to make the train fully functional and compatible with standard LEGO tracks. To make such a beast turn on LEGO’s tight tracks, all the wheelsets articulate individually, just like the real thing. The rear 8-wheel section is connected by a single technic axle that runs up to the motor, thus allowing this wheel set to articulate while providing drive to the wheels (unlike the first version that had a fixed wheelset in the back). All in all, seeing 2,312 pieces smoothly navigating tight LEGO curves is insane!”

So far, the new model has received about 1,200 votes and has until June 2024 to reach 10,000. If everyone who looks at Railway Age’s website and reads this story casts a vote, Hvidtfeldt’s new Big Boy, in my humble opinion, will amass tens of thousands of votes in much less time than that*. So click on the link above, register and vote! It only takes a couple of minutes and it’s free.