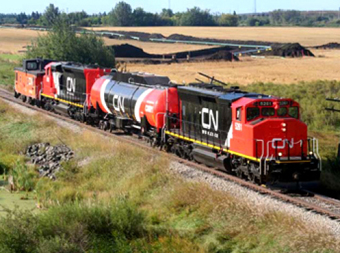 LNG is one of several advanced technologies changing motive power in significant ways.

It has been 20 years since Burlington Northern set a new course in motive power by committing itself to a fleet of 350 EMD a.c.-traction locomotives equipped with Siemens traction motors. At the time, a.c. traction represented the most significant evolution in locomotives since the diesel-electric, with its multiple-unit capabilities and standardized components, had replaced the labor- and infrastructure-intensive steam locomotive (though it didn’t happen overnight).

BNSF Railway, in typical pushing-the-envelope fashion, is now moving ahead with what could be the next big step in motive power: locomotives fueled by LNG (liquefied natural gas). Two sets—one each from EMD and GE—consisting of an LNG fuel tender sandwiched between two high-horsepower, six-axle a.c.-traction locomotives, have completed two months of intensive testing, with testing equipment that simulates a train hauling 100 cars of coal on the FAST (Facility for Accelerated Service Testing) loop at TTCI in Pueblo, Colo.

These units, with a letter of concurrence for main line testing from the Federal Railroad Administration, are now being prepped for revenue-service evaluation “at a variety of locations, in real-world conditions,” says BNSF Director Operations Support Mike Swaney. “They operated safely at TTCI for several thousand miles, and the OEMs have performed a lot of fine-tuning. The next step is to determine if they can meet our performance requirement, which means they must be able to perform similar to their diesel counterparts.”

BNSF’s EMD LNG set consists of two SD70ACe units; the GE set, two ES44ACs. Both utilize a legacy fuel tender that originally saw service in the 1990s during BN’s brief foray into LNG. These tenders, originally built by Air Products & Chemicals Inc., have a cryogenic capacity of about 20,000 gallons; gasification of the LNG occurs on the tender. Both locomotive sets are “dual-fuel”—should conditions require a modified usage, they can switch to 100% diesel operation.

Both LNG delivery systems are low-pressure and employ either a 60%-40% (EMD, with a 710 power plant) or 80%-20% (GE, with a GEVO power plant equipped with a NextFuel™ Natural Gas Retrofit Kit) LNG-diesel mix, for compression ignition. (100% LNG requires spark ignition and thus involves many more modifications to the existing prime-mover).

Aside from natural gas’s significantly lower cost per unit of energy compared to diesel needing to remain in place to make the economics work, widespread adoption of LNG has three essential pieces: engine and fuel tender technology, fuel infrastructure, and a supportive regulatory framework. In terms of a fuel tender design, “it’s too early to tell,” says Swaney. “At this point we’re focused on tank-car-style tenders, and we’re working with the AAR’s Natural Gas Fuel Tender Technical Advisory Group on a standardized design. We are aware, though, of the ISO tank option.” The proposed ISO tank approach to refueling involves swapping out a spent ISO LNG tank for a fresh unit delivered to a mobile refueling site.

Emissions? With Tier 4 compliance coming up on Jan. 1, 2015, even though NOx, PM (Particulate Matter), and CO2 are typically lower with natural gas compared to a diesel engine, LNG won’t be a big factor, as widespread deployment isn’t expected to begin until at least 2017.

The EMD approach to LNG

EMD and parent company Caterpillar® have developed three technologies for burning LNG in locomotive diesel engines: Spark Ignited (100% LNG), Dynamic Gas Blending™ (dual-fuel, up to 60% LNG), and High Pressure Direct Injection (up to 95% LNG). EMD’s approach to DGB™ involves introducing natural gas into the engine early in the combustion cycle. A computer-controlled valve opens adjacent to the lower liner air intake ports, feeding a mixture of natural gas and air into the cylinder, which is then compressed. Near the top of the piston stroke, diesel fuel is injected, and its ignition causes the natural gas to ignite.

“Since the pressure in the engine air intake system is relatively low, high pressure is not required for the gas to flow into the engine,” explains EMD Director Engine Systems Martha Lenz. However, “early-cycle introduction of natural gas presents a challenge due to the tendency for the mixture to pre-ignite as a result of its temperature in the cylinder as it compresses, limiting the amount of gas that can be substituted for diesel fuel. Typically, dual-fuel engines using this method provide 50% to 60% substitution of gas for diesel fuel on a duty-cycle basis. Engine modifications such as reducing the compression ratio may improve operation with natural gas and increase the substitution rate. However, such changes may reduce the efficiency of the engine when operating on 100% diesel, and the engine may be more difficult to start when cold.”

By contrast, HPDI injects natural gas much later in the compression cycle, “eliminating issues with pre-ignition and allowing the engine to run like a diesel,” says Lenz. “Since the natural gas must overcome cylinder pressure and requires injection over a short duration, it is introduced at high pressure using a special injector that provides 5% diesel fuel to ignite the mixture.” Caterpillar and Westport Innovations jointly developed this injector.

Safety is naturally a concern with LNG. Methane detectors are used to identify any natural gas leak on the locomotive and alert the control system to shut off the gas supply.

“We selected the daily freight run between Edmonton and Fort McMurray for several reasons,” says CN spokesman Mark Hallman. “Edmonton is an important location on our transcontinental network, the site of a major yard and diesel fueling operation. The loop operation between the two Alberta centers allowed the fueling, servicing, maintenance, and training at a central point in Edmonton. And the 300-mile line sees sufficiently high-tonnage trains over undulating territory to test the capabilities of the locomotives.”

Hallman cautions that CN is “in the very early stages of our exploration of the long-term opportunity,” and adds, “We continue to work with other parties, including specialized manufacturers, locomotive builders, fuel suppliers, and regulatory agencies on a project to develop a state-of-the art natural gas locomotive and a standardized fuel tender. We will need more long-term experience—and will need to see more industry research and development work proving the rail technology employing natural gas is effective and economic—before we can comment on the long-term viability of natural gas fueled locomotives as alternatives to our current diesel locomotive fleet.”

A quad-turbocharging system with one turbo for each four-cylinder quadrant “provides outstanding response to load demands, with tractive power delivered more rapidly across the entire rpm range to increase acceleration, boost gradient climbing ability, and reduce journey times,” Cummins says. “The 4,200-hp output of the QSK95 is the highest achieved from a 16-cylinder high-speed diesel. When running at high engine-load factors, it is operating well within its design capability. High power density is enabled with a hardened power cylinder featuring the strongest single-piece forged steel piston available in the industry. The engine and SCR exhaust after-treatment take a simpler approach to meeting Tier 4 by putting the main focus of emissions reduction in the exhaust stream, with the SCR after-treatment removing the NOx. This leaves the engine combustion to focus on removing PM emissions, avoiding the need for any additional complexity.”

For gensets, a new LEAF® 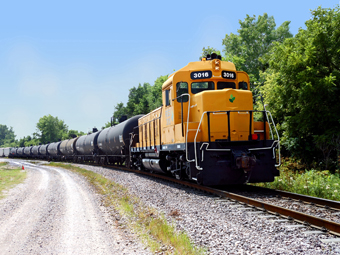 Railserve, a provider of in-plant switching services at many North American locations, employs its own locomotives to move railcars within industrial, manufacturing, and production plants. Rather than purchase genset locomotives, Railserve designed a low-cost, lower-horsepower single-engine genset with proprietary power control technology developed by Alternative Motive Power Systems (AMPS)—the four-axle LEAF® (Low Emissions And Fuel), which is also available as a twin-genset DUAL LEAF®. The first LEAF® units were built at Railserve’s Longview, Tex., locomotive facilities and placed into service in 2008. Railserve is now looking to market this locomotive to other railroads, according to Program Manager T.J. Mahoney.

“In addition to reducing costs and environmental impact, the LEAF® surpasses conventional locomotives in many ways,” says Mahoney. “Key to its performance is its higher rail adhesion—the only difference new operators need to learn how to manage. A proprietary traction motor control system automatically backs off current to any one of the four axles that is in danger of slipping. When this condition arises, the LEAF® applies sand to the rail and reduces power to that one axle only. The unit resumes full power as soon as the chance of slipping passes, and the other three axles remain at the amp load designated by the system for the requested speed and track condition. The operator does not need to reduce power, as is necessary for conventional locomotives experiencing wheelslip.”

Mahoney says the LEAF® provides “45% to 60% lower fuel consumption and a life-cycle cost equal to or less than conventional locomotives, 98%-plus reliability, 90% savings on lubricants (synthetic oil changed only once a year), and dramatic reductions in greenhouse gases, NOx, and particulate matter. It does not experience any wet-stacking (oil discharged through the exhaust, which forms a carbon residue that can ignite from noncombusted oil), and thus uses 90% less oil. Maximized tractive effort occurs at speeds less than 10 mph. Its decibel output is 10% lower than conventional locomotives.”

Data from the AMPS Locomotive Control Unit (LCU) is processed by OAR, and then transmitted via WiFi or cellular systems to a web-based dashboard for locomotive status and performance monitoring by on-site plant managers or operations personnel at remote locations. The LCU communicates with all LEAF® systems: generators, traction control, throttle, reverser, brake, and three-axis accelerometer. Data fed to OAR can be displayed in various forms, including plots, charts, indicators, and histograms. 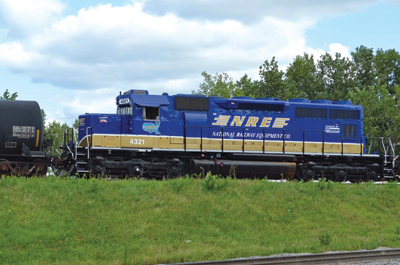 When employed in hump yard service, the d.c.-traction NR33CDE-IAC, according to NRE Assistant Vice President Sales and Marketing Keith Batley, offers a unit reduction of one locomotive over a three-unit consist of SD40-2s. This is mostly attributable to a 50% adhesion factor increase over an SD40-2, achieved with NRE’s chopper module and N-Force microprocessor control system. Performance, says Batley, “is equivalent to that of an a.c.-traction locomotive.”

The prototype unit, no. 4321, was as of late August in a six-week testing program at BNSF’s Galesburg (Ill.) yard. This locomotive, which can also be employed in line-haul service, was built on an SD40-2 platform equipped with a 645E3B prime-mover. NRE, however, can also convert a GE d.c.-traction locomotive into one of these versatile and fuel-efficient pieces of modern motive power.