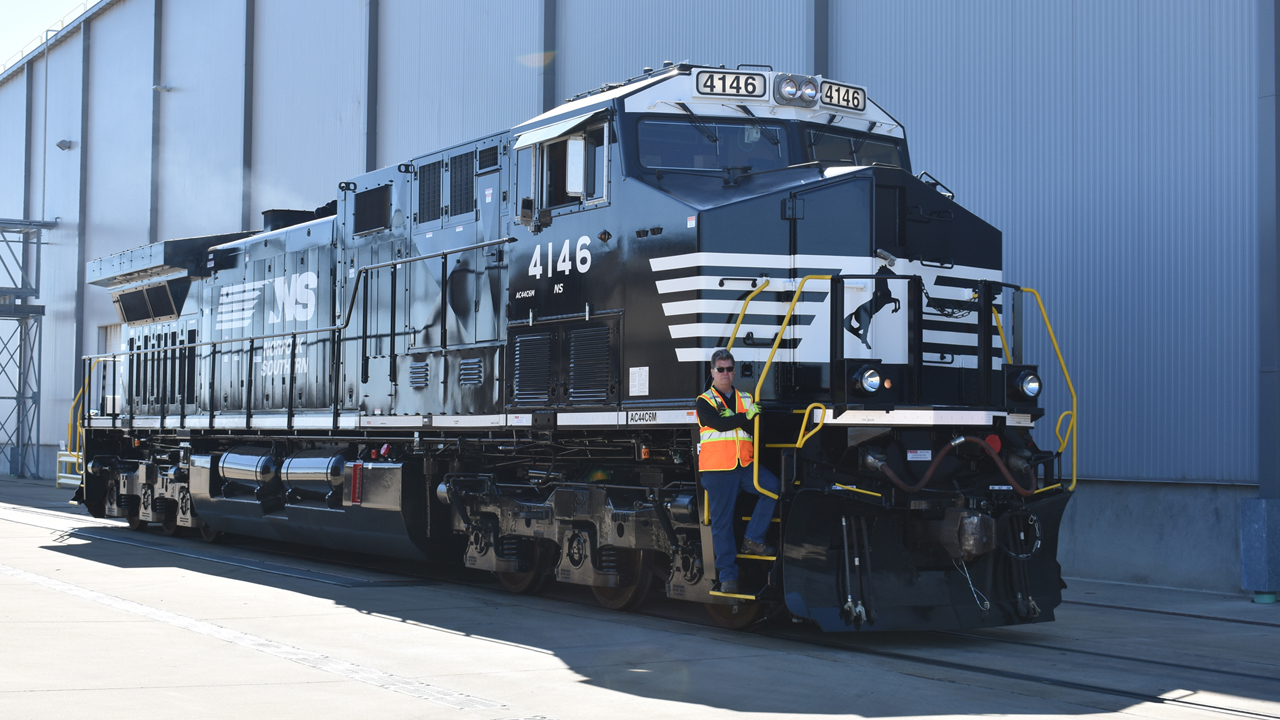 FORT WORTH, TEXAS, MARCH 20, 2018: In nine weeks’ time, the GE Manufacturing Solutions (GEMS) one-million-square-foot, 71-acre, 500-employee facility in Fort Worth, Tex., part of the GE Transportation supply chain, can take an aging locomotive and, through a modernization program, upgrade it to state-of-the-art technology.

Approximately 170 locomotives for North American customers (including kits) have been through the program since 2017; another 1,000 are expected to be modernized at Forth Worth and other GE plants worldwide for global customers. The predominant number of “mods,” as they are called, and kits will originate in Fort Worth. GE Transportation has completed approximately 2,000 locomotive modernizations in more than 24 countries, for 37 customers.

GE says the mod program improves utilization, yielding increased tractive effort of up to 50%, better adhesion of up to 25%, improved fuel efficiency of up to 10%, improved reliability of up to 40%, and maintenance and repair expense reductions of up to 20%, for units undergoing modernization.

The mod program includes DC to AC traction conversions, modern engine control packages, GTO (gate turn-off) to IGBT (insulated-gate bipolar transistor) propulsion control upgrades, installation of GE’s Trip Optimizer and DP (distributed Power) systems, installation of Positive Train Control (PTC) equipment or the gear to accommodate it (depending upon the customer), and overhauled prime-movers and traction alternators. The locomotives retain their original power plants and truck frames, and typically receive a one-level EPA emissions-compliance upgrade. For example, a Tier 1 locomotive will be upgraded to Tier 1A. Most of the modernized units are Dash 8s, Dash 9s and AC4400s.

The intent is not to extend a locomotive’s service life. Rather, it is to increase its productive value.

GE will perform the entire modernization, or for some railroads—Norfolk Southern, for example— provide kits that enable them to complete the assembly with GE Transportation technical support. 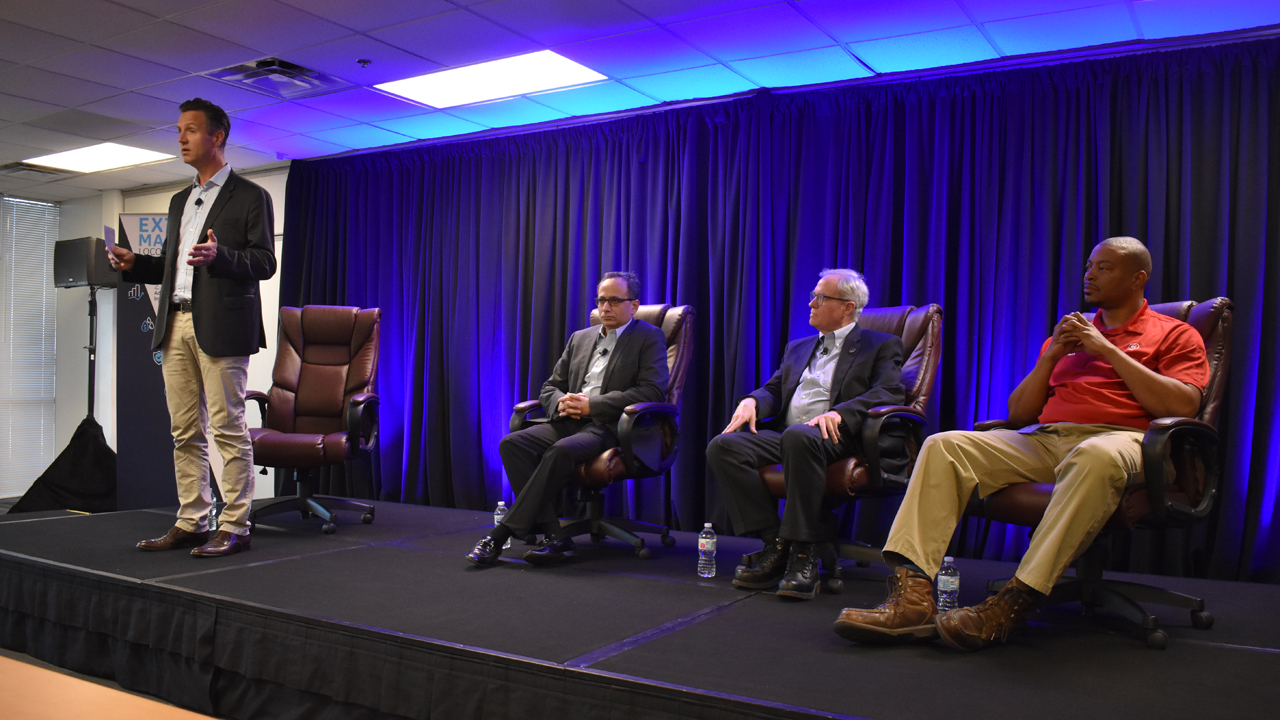 “Our modernization program allows our customers the ability to extract more value out of their asset by bringing performance to the latest standards, and re-purposing them to reflect changed strategies,” says Pascal Schweitzer, GE Vice President Global Services. This is accomplished by “customizing solutions for our customers and installing state-of-the-art technology. No two locomotives are the same.”

GE and Norfolk Southern conducted a plant tour on March 20 that showcased a completed NS AC44C6M, one of 100 units the railroad is modernizing. NS Assistant Vice President Mechanical Doug Corbin described the program as “part of our fleet management strategy” for its 4,000-unit fleet, describing the investment as “a reasonable capital spend. We looked at acquiring new units vs. modernization, and decided to go with improvements that would increase productivity on our existing fleet. We needed an upgrade to AC traction. We wish to grow our business without increasing our locomotive fleet size, as locomotives are expensive long-term assets.” 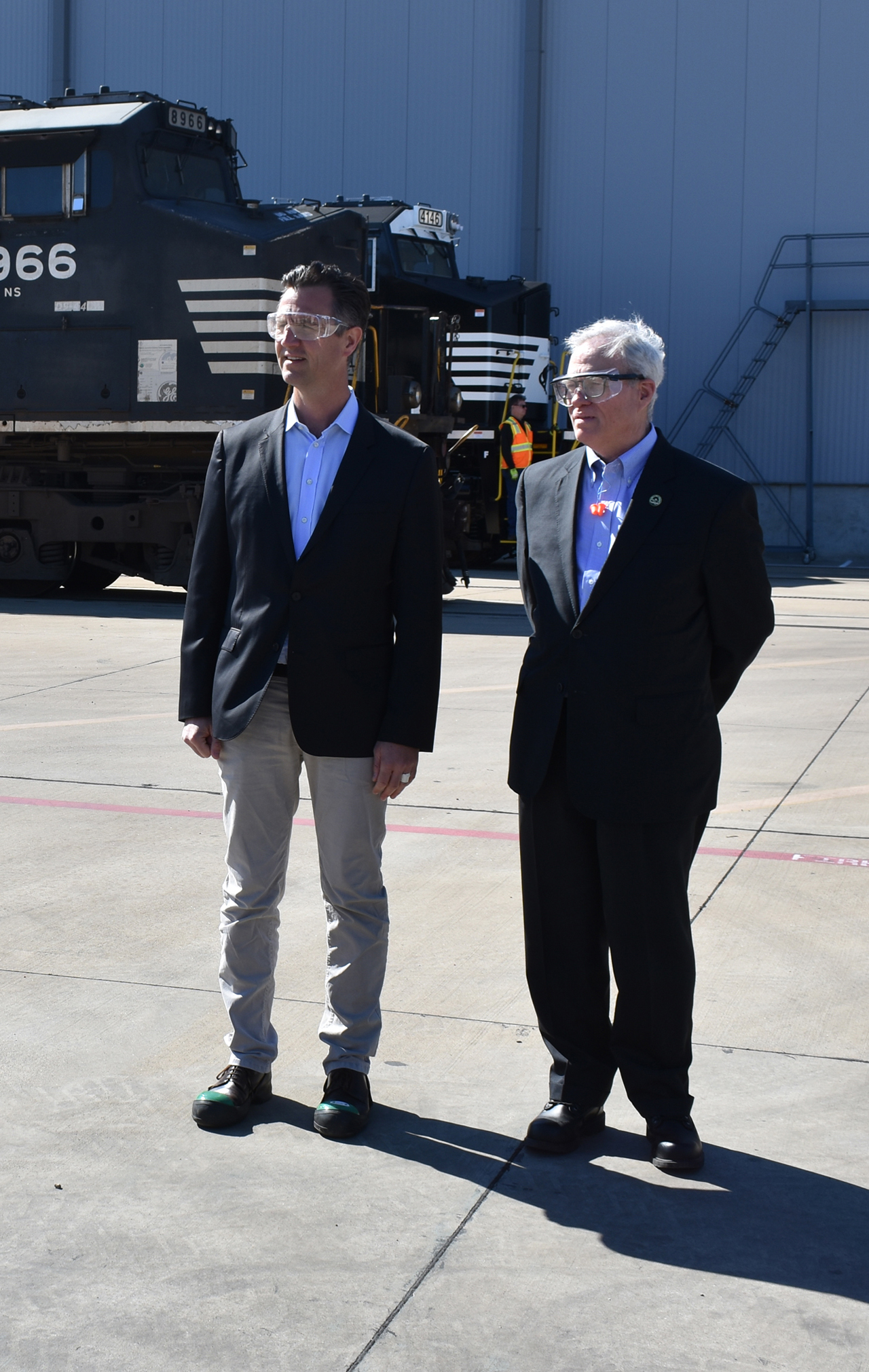 The NS program involves a combination of kits shipped to the railroad’s Altoona, Pa., locomotive shops and units transformed in Fort Worth. The number of units NS is modernizing is beyond Altoona’s capacity, so having GE do some of the work in Fort Worth “creates a shorter pipeline,” says Corbin. “As well, our mechanical forces are familiar with the technology—there is nothing radically different; these units are similar to our GE Evolution Series locomotives.” 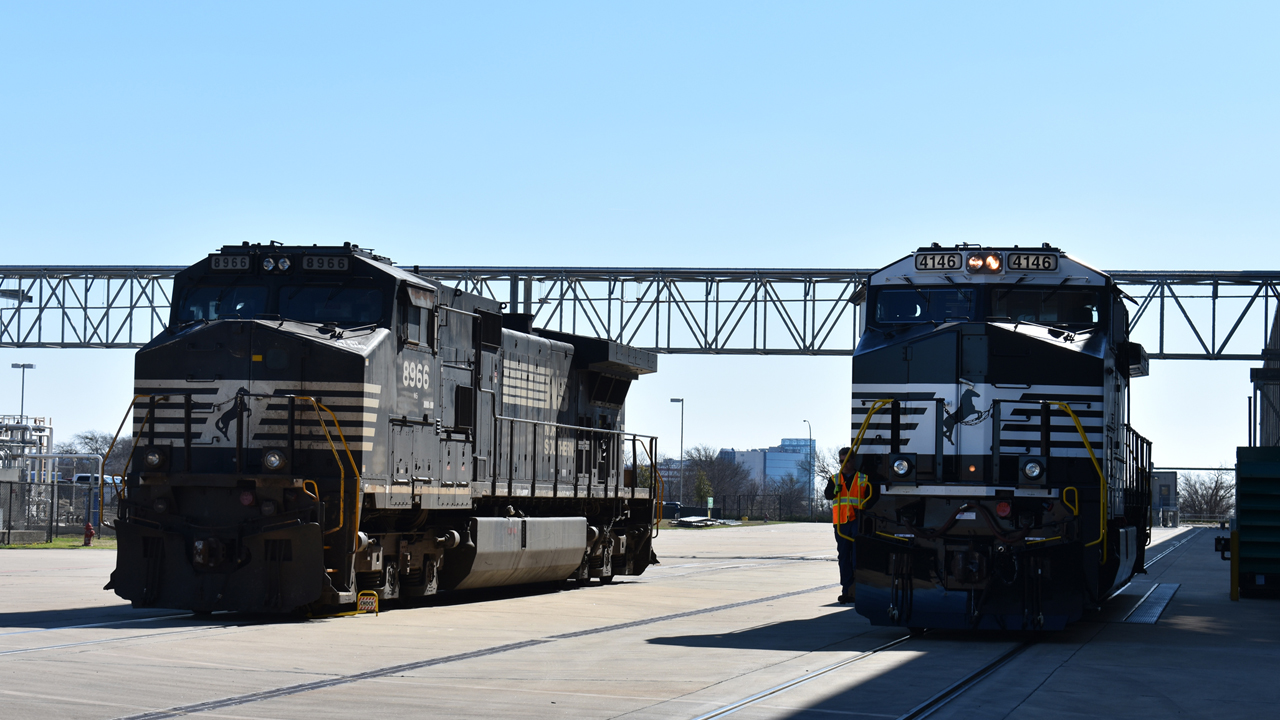 “When locomotives reach the 20-year service mark, give or a take a few years, they can benefit from new technology,” says GE General Manager, Global Services Product Management Sameer Gaur. “We call it a customized reboot, because we partner with our customers.” He refers to the multi-disciplinary, cross-functional team that develops each modification program as the “Mod Squad.”

GE General Manager North American Locomotives Mike Patton said transitioning the GEMS Fort Worth plant from a new-builds-only facility to one that specializes in mods was “a complex undertaking.” It involved implementing a dedicated tear-down line with new shop processes for taking units in. New and modernized units leave the facility from the same production line. 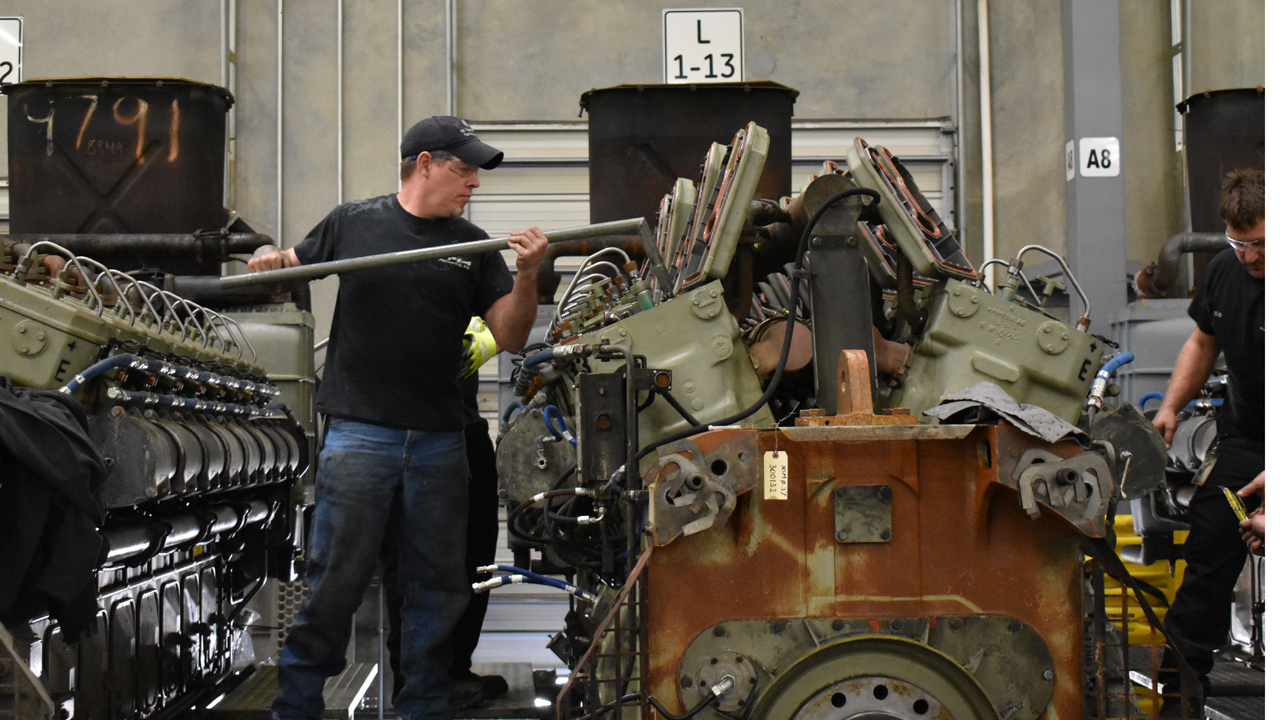 The mods are modular: They involve a new operator’s (main) cab and new electrical cab (an auxiliary cab and a traction inverter cab) up front, and a new radiator (“blower” or “rad”) cab behind the prime-mover/traction alternator assembly. 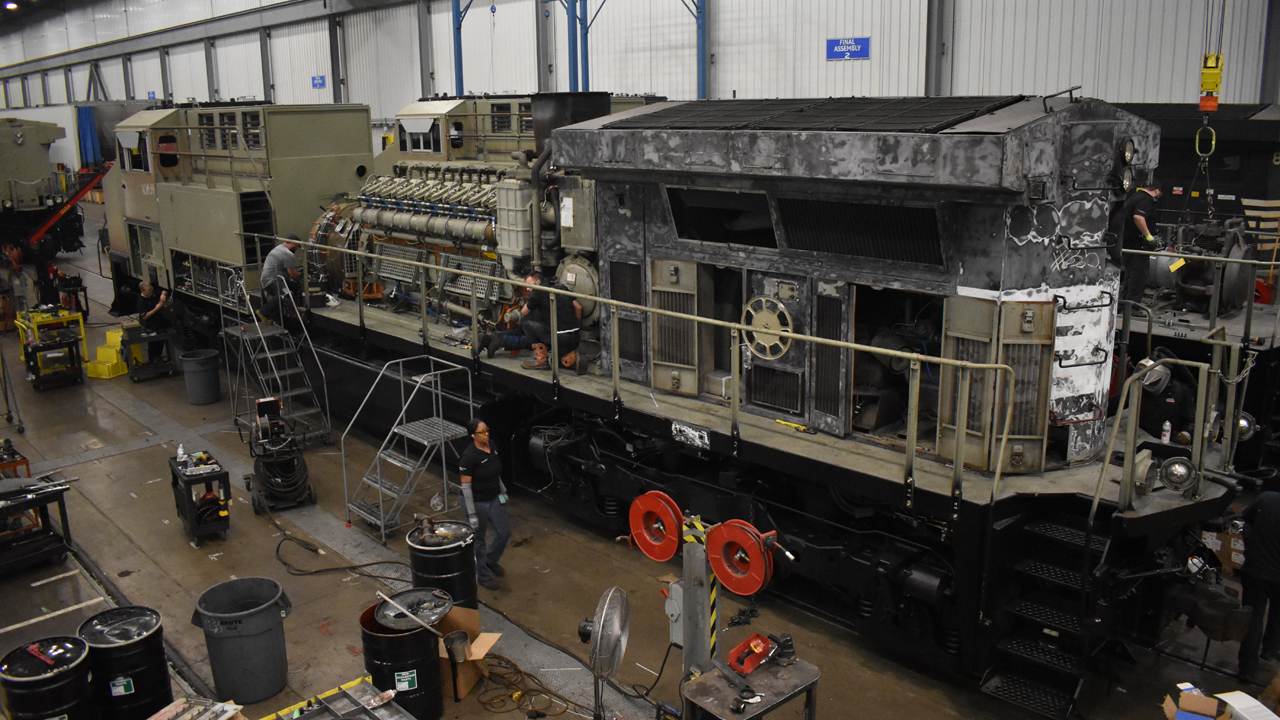 The final steps in the process are the paint booth, where four locomotives, utilizing electro-static water-based paint, can be finished simultaneously; and testing. Painting requires two to three days; testing, three to four days. 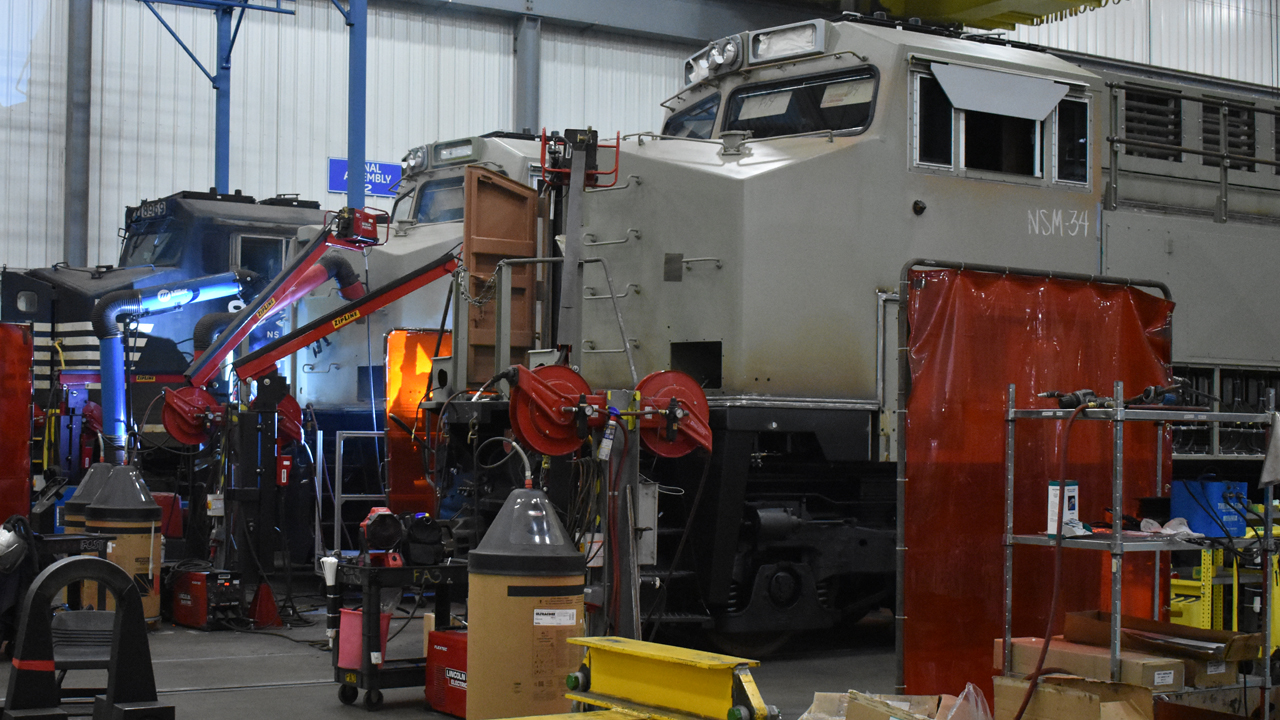 The GEMS Fort Worth facility, completed in December 2012, involved a $235 million overall investment. It employs approximately 500 assem­blers, maintenance technicians, machinists, welders, warehouse associates and support staff, the majority from the Dallas/Fort Worth Metroplex. The locomotive plant is GE’s largest manufacturing footprint under one rooftop. It is the locomotive manufacturing hub for GE Transportation in North America. “With the demand for modernizations, GEMS established itself as the largest modernization facility in the world,” the company says. 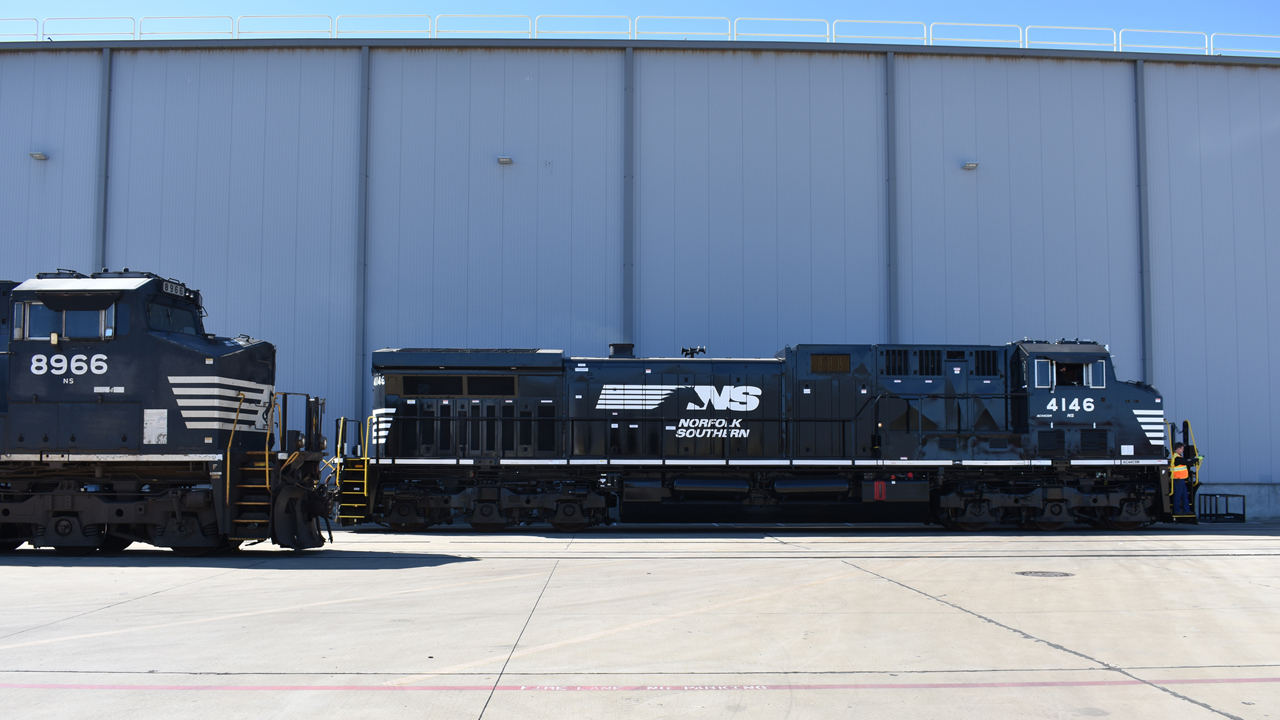 Not far from GEMs Fort Worth is GE’s Global Performance Optimization Center (GPOC), one of four worldwide (Erie, Pa.; Fort Worth; Brazil and Kazakhstan). The centers collectively monitor 17,000 locomotives worldwide for more than 50 customers operating in 20 countries. They operate 24/7, manned by teams of three to four people per shift described as “experts who provide true condition-based repair instructions.” 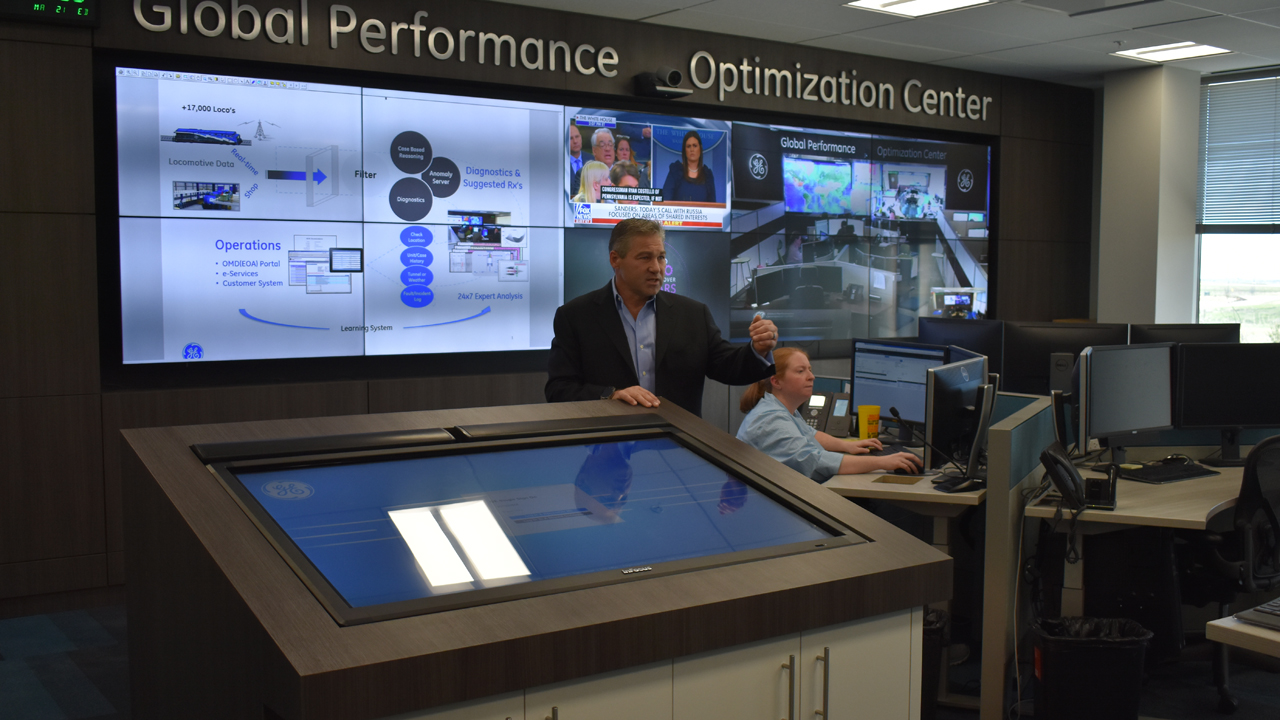 “In general, the GPOC system addresses about 80% of failures that can impact a locomotive,” says Services Operation Executive Vic Russo. “We cover the engine, propulsion, auxiliaries, computers, communications, crew interfaces and train control systems. The centers receive 2.5 million messages per day. Digital tools (knowledge rules, digital twins, machine learning, etc.) process these messages into about 500 ‘cases’ a day, which are then reviewed by onsite experts. Experts issue about 300 ‘Rx’ instructions per day to the various field service teams. Each Rx is a detailed troubleshooting instruction for a specific issue on a specific road number. The various field teams execute the Rx and provide feedback on the work done. The time from when an alert message is received to an Rx being issued is no more than 15 minutes. The GPOC reviews feedback from the field and closes each Rx case. This closed-loop feedback is key to keep the system ‘learning’ and improving every day. The centers also field about 150 calls a day to work with the field on troubled locomotives. Calls are addressed in the native language of the country in which each center is located.”

Customer benefits, Russo explains, include “precise, accurate repair recommendations that improve service quality because repeat failures are dramatically reduced; and advanced notification of imminent failures that allow customers to proactively route locomotives for repair and avoid main line failures and train delays. Having advanced notices allows shops to pre-plan labor, parts and locomotive placement, dramatically reducing unavailability. The computer- and GPOC-generated Rx also saves shop labor by reducing troubleshooting time. All customers benefit from the GPOC’s centralized learning capability. The GPOC is like a central ‘doctor’ that analyzes all failure modes. This knowledge is shared with all customers—independent of fleet size or age. These benefits improve locomotive reliability and availability by more than 20%.”