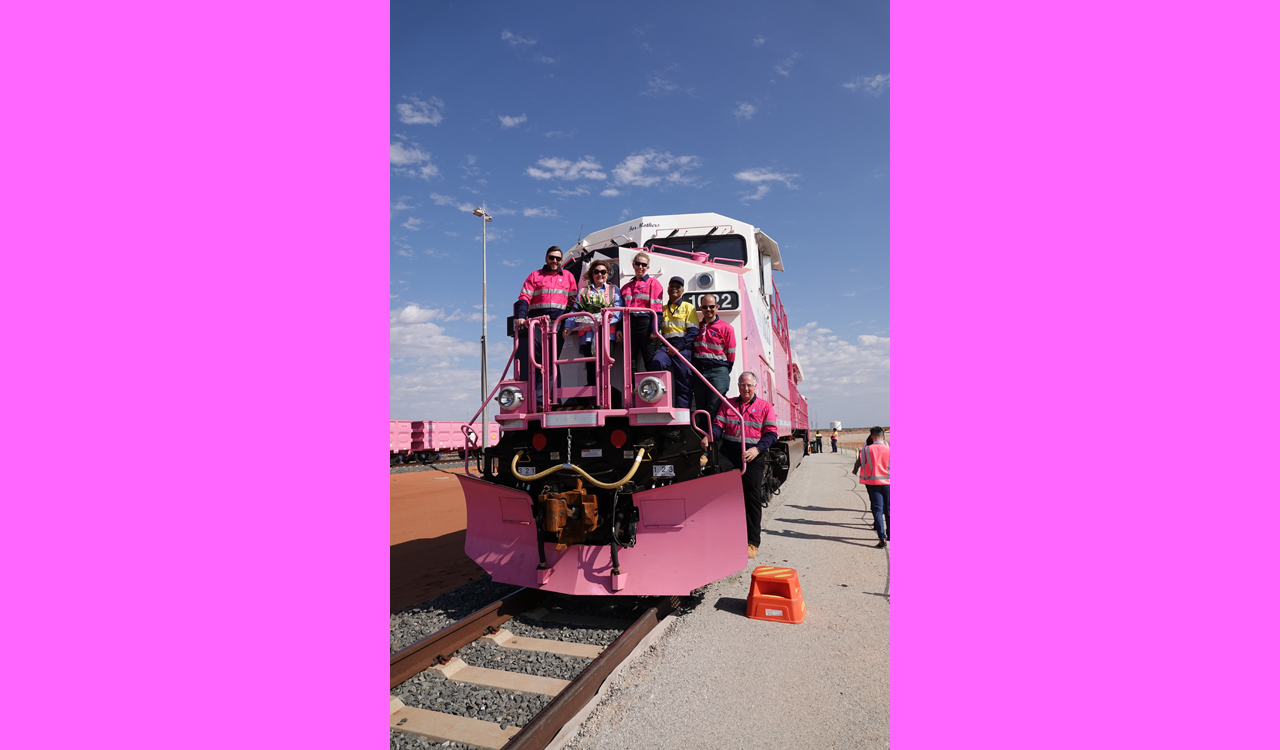 The pink scheme is in honor of Roy Hill Chairman Gina Rinehart’s continuing commitment to breast cancer initiatives. At the event, Rinehart christened one of the locomotives For Mothers, and Dr. Patricia Kailis, AM OBE, christened the other Women of the North.

“Understanding Mrs. Rinehart’s deep commitment to supporting breast cancer patients and research for better treatments and cures, GE was [happy] to support Roy Hill’s request to have the new locomotives painted pink,” said GE Transportation Executive Leader-Australia Claire Pierce, “We deeply value our relationship with Roy Hill and are [glad] to celebrate the [addition] of these locomotives to its fleet.”

“This marked the first time GE has painted a locomotive pink, and we are proud to support such an important cause,” said GE Transportation President and CEO-International Nalin Jain. “These locomotives will serve Roy Hill well both in hauling millions of tons of iron ore and demonstrating its commitment to breast cancer prevention, diagnosis, treatment and survival.”

GE built the locomotives at its Fort Worth, Tex., Manufacturing Solutions plant. They “are designed to efficiently operate in the hottest climates and harshest mining environments,” the company noted. “The GE Evolution Series engine, high-ambient cooling system and individual axle control technology enable the locomotive to deliver 4,500 horsepower with maximum tractive effort in regions where temperatures exceed 130 degrees Fahrenheit.”

CRRC recently delivered the 130 pink-painted iron ore cars to Roy Hill. “These cars, when [coupled] to one of our new GE pink locomotives, will create a striking image as they forge their way across the Pilbara,” Rinehart said. “May these pink trains continue to inspire us to do more for breast cancer patients and support research to help fight this truly terrible and sad disease.”

Situated 213 miles southeast of Port Hedland in Western Australia’s mineral rich Pilbara region, Roy Hill is an independent iron ore operation with local majority ownership and chaired by Gina Rinehart. With integrated mine, rail and port facilities producing 55 million tons annually, the company is one of the world’s major resource-based operations. Roy Hill’s first shipment of iron ore departed from Port Hedland in December 2015, and has since loaded multiple shipments to its key markets in Japan, Korea, China and Taiwan.