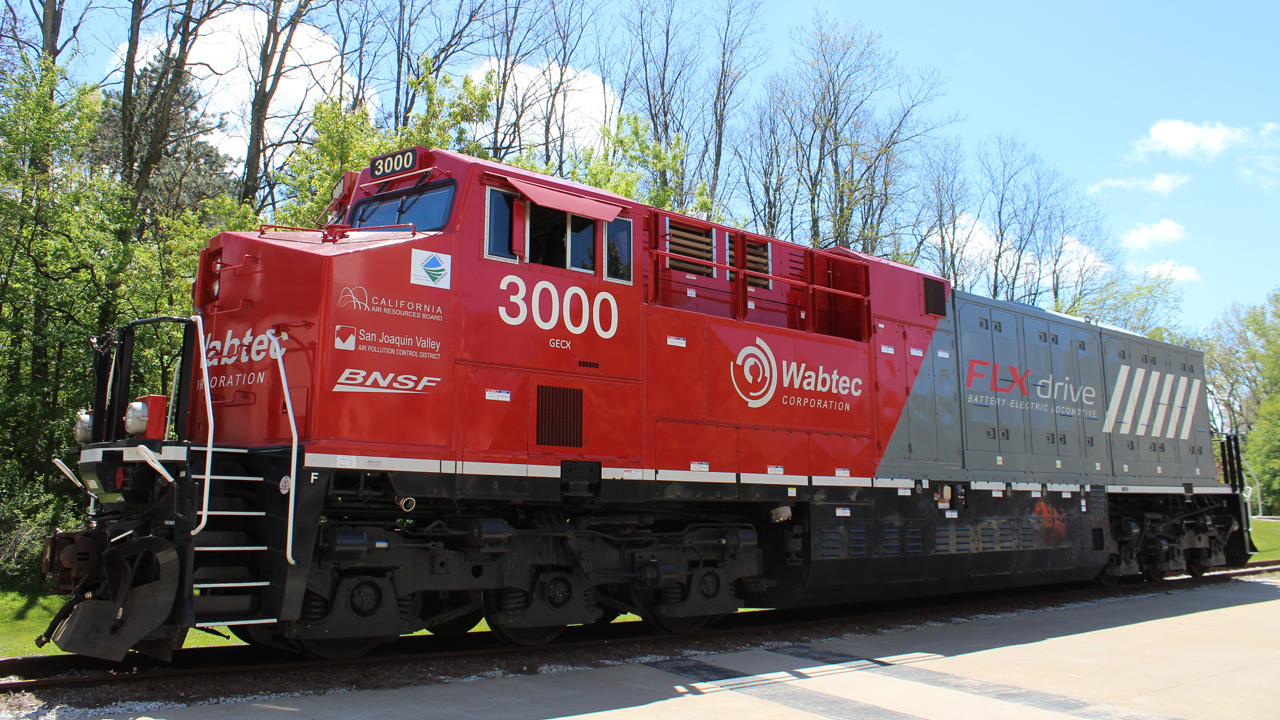 The battery-electric locomotive (pictured) wrapped up service at the end of March, after running in a “battery-electric hybrid consist” between two Wabtec Tier 4 diesel-electric units across more than 13,320 miles of “hilly terrain” in San Joaquin Valley, Calif.

BNSF and Wabtec reported May 17 that their three-month pilot of a battery-electric locomotive (BEL) reduced fuel consumption and greenhouse gas (GHG) emissions by an average of 11% in a revenue service train.

This is the equivalent of more than 6,200 gallons of diesel fuel saved and about 69 tons of CO2 emissions reduced, Wabtec said. When the pilot program was announced in January, Wabtec and BNSF had expected the BEL to reduce the environmental impact from emissions along the Barstow-Stockton, Calif., route “in an efficient manner,” while improving the fuel economy for the entire consist by at least 10%.

The BEL wrapped up service at the end of March, after running in a “battery-electric hybrid consist” between two Wabtec Tier 4 diesel-electric units across more than 13,320 miles of “hilly terrain” in the San Joaquin Valley, according to the manufacturer. Classified as a “non-attainment area,” Wabtec said, “the air quality is worse than the National Ambient Air Quality Standards.”

BNSF partnered with Wabtec on the development of the BEL, “which features an overall energy-management system, including onboard energy storage that, when coupled with advanced system-optimization controls, will improve consist and train performance,” the Class I railroad explained in January.

The pilot was part of a $22.6 million California Air Resource Board grant awarded to Wabtec, BNSF and the San Joaquin Valley Air Pollution Control District. The 430,000-pound FLXdrive, which includes 18,000 lithium-ion battery cells, was charged at a BNSF rail yard in Stockton, Calif., and recharged during the trip through dynamic braking, said Wabtec, noting that FLXdrive managed “the overall train energy flow and distribution through its Trip Optimizer system.”

In a statement to Railway Age, BNSF said, “The 100% battery-electric locomotive pilot with Wabtec met our expectations for efficiency performance and confirmed that we will continue to explore the potential of this technology.”

“Building on our long history of pioneering train energy management technologies, this demonstration of coupling 2.4 megawatt hours of battery storage into the mix fully validated our assumptions for the potential for this next-generation technology to further drive efficiencies and greenhouse gas reductions,” Wabtec Chief Technology Officer Eric Gebhardt said.

What’s next? Wabtec said it will build a “second-generation locomotive with a battery capacity of more than 6 megawatt hours—a level of energy that can reduce a locomotive consist’s fuel consumption and carbon emissions by up to 30%.” It could be commercialized and enter service “in the next few years,” the company reported.