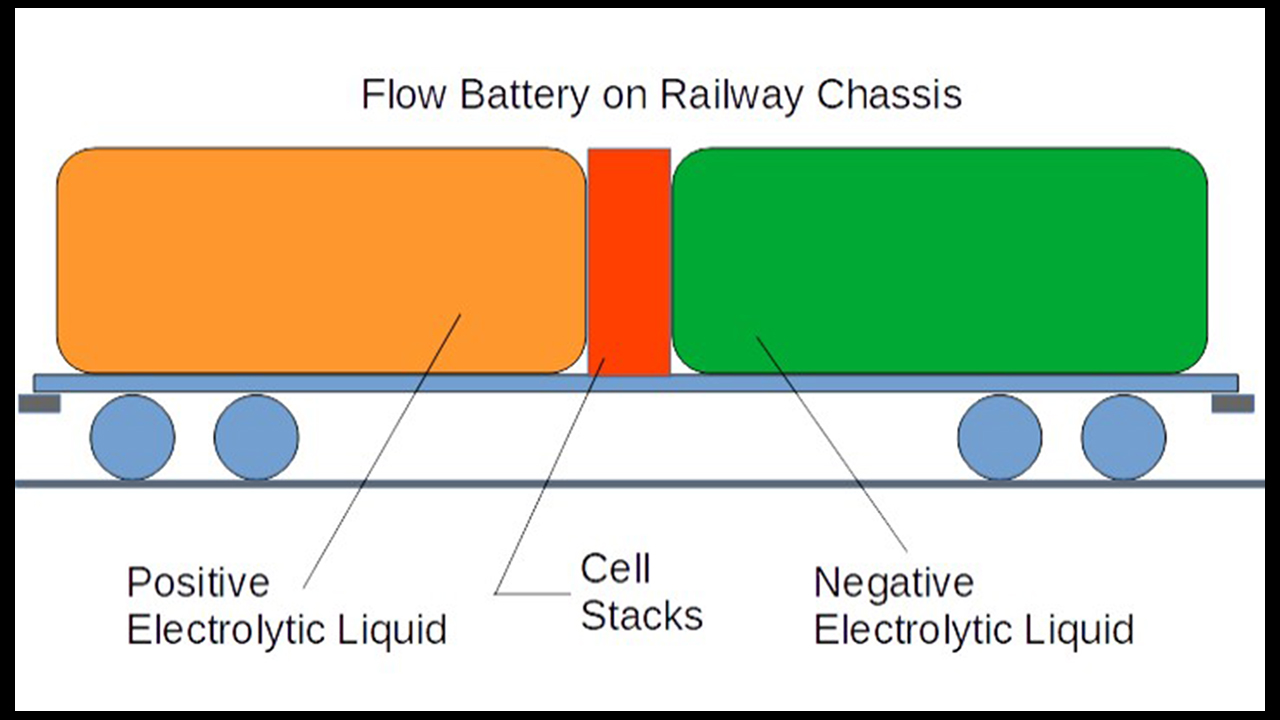 Introducing battery-electric tender units into modern railway propulsion is based on several precedents. Electric traction motors in diesel locomotives operate at the continuous power rating. To achieve maximum energy conversion efficiency, the diesel prime-mover, electrical generator (traction alternator) and traction motors all need to operate at maximum output. Operating at part-load entails a reduction in overall energy conversion efficiency. (In all-electric locomotives drawing power from overhead catenary, traction motors have a continuous rating as well as a 5-minute power rating that could be up to 50% higher than the continuous rating.)

Dynamic braking in the absence of catenary involves  traction motors functioning as generators that convert kinetic energy to electric power, which is dissipated as heat through a resistor bank. While some railway companies have converted a few diesel-electric locomotives to plug-in battery-electric operation or hybrid operation involving a small diesel engine, the electric motors quite often operate at below the continuous power rating, at part-load and below peak conversion efficiency. The addition of a battery-electric tender unit to diesel-electric or battery-electric locomotives offers potential to increase locomotive operational efficiency and versatility.

Battery-electric tender units could be built on modified existing railway freight rolling stock chassis and carry long-life batteries capable of delivering locomotive levels of power output at competitive cost. The battery tender unit would assist locomotives on passenger commuter trains, short-distance passenger intercity trains and even on short- to medium-distance freight trains. On such trains, the tractive effort from the powered axles of a single locomotive is often sufficient to pull the load.

Battery-electric industrial locomotives still are widely used in switching operations, using large-scale lead-acid batteries to store propulsive energy. Lead-acid batteries first appeared during the late 19thcentury. The use of oversized batteries provides additional weight to increase tractive effort and reduces the depth of discharge that in turn greatly extends useable service life prior to battery replacement. There have been several conversions of diesel-electric locomotives to both plug-in and hybrid battery-electric operation that included a small diesel engine driving an electrical generator to assist lead-acid storage batteries.

Lead-acid batteries require slow recharge at low current to avoid damage to the plates of lead. They also release energy slowly. Repeated deep-discharge operation of more than 75% from full recharge leads to premature battery failure, often within fewer than 500 recharge cycles. Repeated discharge of less than 25% usually provides up to 2,500 cycles in premium lead-acid batteries. Replacing the plates of lead with blocks of carbon foam has increased electric storage density as well as useable life expectancy of up to 3,500-cycles at 50% depth of discharge, using the same battery acid in carbon-foam battery technology.

Until very recently, lithium ion battery technology was one of the very few commercially available electric energy storage technologies that exceeded the performance of lead-acid batteries while being capable of large-vehicle propulsion applications. Lithium ion battery technology has been applied to railway propulsion, including conversion of a diesel-electric locomotive to battery-electric operation and in multiple-unit operation with diesel-electric locomotives. At $135 per kilowatt-hour, a bank of lithium ion batteries for a 2,400-kWh locomotive would cost around $325,000. The technology is facing new competition in terms of cost and life expectancy.

Researchers at Massachusetts Institute of Technology (M.I.T.) and the University of New South Wales (Australia) have developed electrical energy storage technologies that show promise for railway propulsion. While close in price to lithium ion batteries, the new technologies can offer up to 20,000-deep discharge cycles approaching almost 100% of original recharge, with more than 98% of original storage capacity being available after 5,000 deep discharges. The flow battery stores energy in liquid electrolytes carried in separate insulated tanks, while the liquid-metal battery that originates from M.I.T. stores electrical energy inside insulated containers of molten metal at high temperature.

Recycling of spent lithium ion batteries involves considerable cost and poor lithium recovery efficiency. By comparison, the recycling of expired liquid electrolyte batteries and liquid metal batteries involves less cost and higher recovery efficiency—50% to 60% cost recovery of important materials such as vanadium, antimony and cadmium. M.I.T. researchers have tested a small-scale version of their liquid metal battery to 100,000 deep discharge cycles, while optimal storage density occurs within the first 20,000 cycles. This indicates that flow batteries and liquid metal batteries are well suited to large-scale transportation technologies such as maritime and railway propulsion.

AMBRI Battery of Massachusetts was formed as a result of research undertaken at M.I.T. by Materials Sciences Engineering Professor Donald Sadoway into low-cost, long-life grid-scale electrical storage technology. The electrical storage is based on the chemical interaction between cadmium and antimony, separated by a salt solution electrolyte. When fully discharged, a compound of cadmium and antimony is formed in the lower region of the battery. During recharging, the cadmium separates from the antimony and rises to the top of the battery, which is thermally insulated using ceramic material. Gravity maintains separation of the antimony, electrolyte and cadmium.

A mobile version of the battery is still subject to research and shows promise for railway and maritime propulsion application. It is a taller version of the stationary grid-scale battery, with a small interconnecting hole located between upper and lower chambers. Antimony remains in the bottom chamber and cadmium in the upper chamber, with liquid salt electrolyte passing between chambers carrying ions as the battery recharges and discharges. The layout reduces the risk of unintended mixing due to vibration, pitching, rolling and surge motions that would occur in normal mobile operation.

A carbody built on a double-stack well car would enclose assemblies of AMBRI batteries. Custom-built 12-foot-high x 8 foot wide x 10-foot-length containers could carry the mobile version of the AMBRI batteries and provide 750 kWh or 3,750kWh (5,000-hp-hour) on a railcar chassis. Articulated three-section well cars riding on  four sets of three-axle trucks could each carry 4 double-stacked 10-foot containers of AMBRI mobile version liquid metal batteries and provide up to up to 12,000 kWh, with 9,000 kWh available using a single level of 12-foot-high containers intended for operation along height-restricted (not double-stack cleared) rights-of-way

Vanadium Corp plans to its proprietary liquid electrolytes to the maritime sector that would own the cell stacks that produce electric power, with a comparable option being considered for the railway industry, which already owns and operates high-capacity tank cars. A battery-electric railway tender involving flow battery technology would combine an extended-length 89-foot chassis riding on six axles, carrying the stack compartment at mid-wheelbase with each of a 60,000-liter tank of electrolyte carried on either side rated at 40 Wh/l (energy density) for 120,000 liters, providing up to 4,800 kWh or 6,400-hp-hours.

Slow recharge of electrolyte stored in stationary tanks would occur during overnight off-peak hours when power rates are very low. Liquid metal batteries would require twice-daily recharging when the railway tender unit would remain out of service. It would be assigned to operate as a plug-in propulsion-assist technology in rush hour commuter train service. While the railway tender unit that carries liquid metal battery technology would offer high power levels, the competing flow battery offers the equivalent of fast energy resupply, allowing it to offer a higher rate of availability for propulsion.

The railway industry has shown interest in reducing carbon emissions. Battery-electric tenders can contribute toward achieving such an objective. Batteries capable of providing 20,000 cycles of repeated deep discharges of more than 90%, with up to 99% of storage capacity available after 5,000 deep discharges, represent a competitive alternative to batteries that would only provide 50% of storage capacity after 5,000 deep discharges. A battery developed at M.I.T. in the U.S.is one of the alternative technologies. Lliquid metal and flow battery technologies both offer the prospect of long-term, cost-competitive service in railway propulsion.

Harry Valentine holds a mechanical engineering from Carleton University, Ottawa, Canada, where he undertook post-graduate research in transportation. He has worked in engineering and research capacitiesfor Cummins Engines Company, Langson Energy (turbine engine builder), Quasiturbine Engines Company of Montreal, and in rail vehicle redesign at a rebuilding shop in Montreal. He is widely published in the energy and transportation industries.