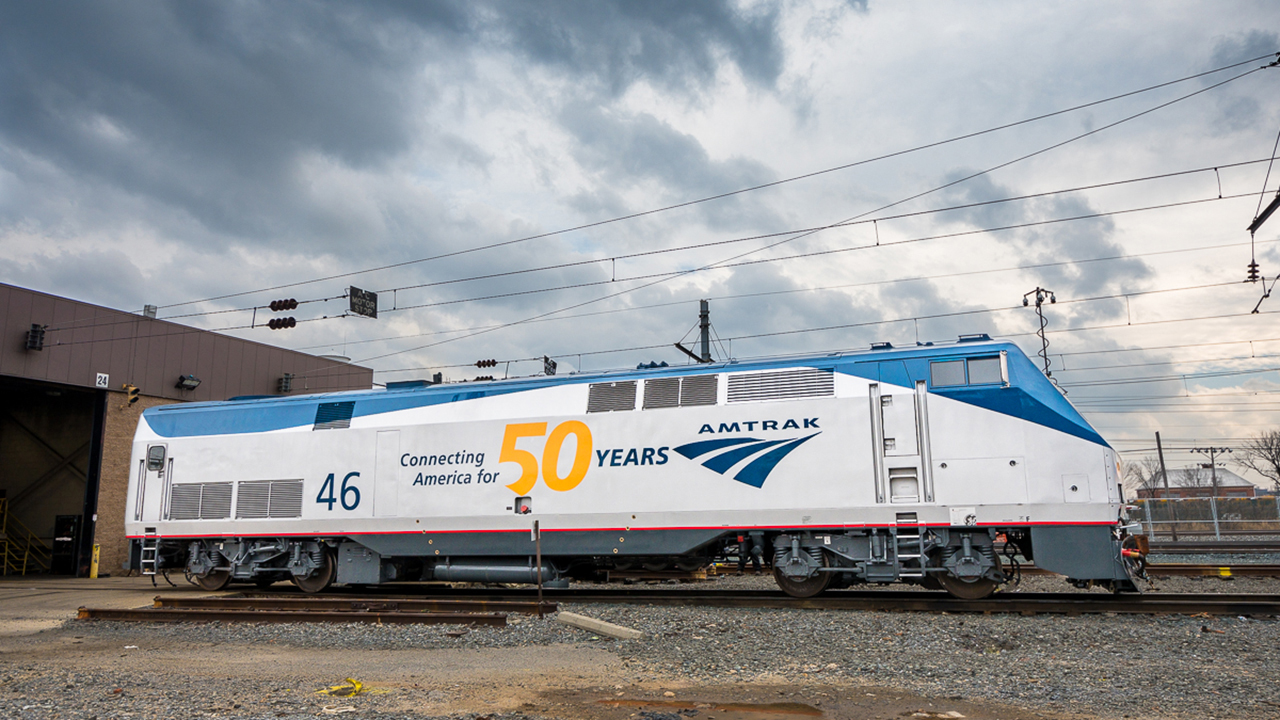 The P42 (#46, pictured above in Ivy City) is in “Phase V 50th” livery, Amtrak’s standard for the past 20 years, but with the “Connecting America for 50 Years” slogan featuring a large golden yellow 50. Photo by Matt Donnelly, Amtrak

Amtrak has rolled out the first of six locomotives featuring graphic schemes celebrating its 50th anniversary.

Genesis P42 (#46, pictured above in Ivy City) is in “Phase V 50th” livery, Amtrak’s standard for the past 20 years, but with the “Connecting America for 50 Years” slogan and large golden yellow 50 decals. The P42 is a General Electric model dating back to the mid-1990s. Cesar A. Vergara, Amtrak’s principal industrial designer at the time, created the carbody.

The other four P42 locomotives are now being overhauled and having graphics applied at the Amtrak Beech Grove shops in Beech Grove, Ind. Amtrak said it expects to release them for network service over the coming months. The sixth locomotive, Amtrak’s newest, is the ALC-42 (#301) Siemens Charger, which Siemens is manufacturing in Sacramento, Calif. Amtrak said it expects delivery in April, when the locomotive will undergo testing before entering revenue service.

The commemorative locomotives are:

• P42 in “Midnight Blue” (above) includes an “all new one-of-a-kind paint scheme celebrating the dedication and commitment of our employees moving people around the clock and across the nation,” Amtrak said.

• P42 in “Phase VI” (above) is the “first adaptation of the latest Amtrak livery phase [dating to 2002] on a P42,” according to Amtrak. (Amtrak rolled out another variation on its “Phase VI” livery last summer that will be applied to the first five new ALC-42s. The sixth unit will be delivered in a heritage scheme, below. The remainder of the ALC-42 fleet will be in an all-new “Phase VII” scheme, which can be seen at the end of the video, below.)

• P42 in “Dash 8 Phase III” (above) adapts, for the first time on a P42, “the award-winning livery designed for the Dash 8 locomotive fleet [designed by Cesar Vergara] in the early 90s,” Amtrak said.

For more on Amtrak’s paint scheme and livery history, watch the video below.

In addition to the commemorative locomotives, Amtrak is also offering 50th anniversary collectible items, including t-shirts, glasses, a challenge coin, pins, and other Amtrak gear.

“We chose locomotives already budgeted for new paint as part of our life cycle preventative maintenance program and used the opportunity to celebrate this significant milestone on the most iconic component of our business,” Amtrak President Stephen Gardner said. “The locomotive designs uniquely honor our heritage and our vision of connecting communities, economies and families nationwide.”

Railway Age’s April 2021 issue will feature a special report on Amtrak’s 50th anniversary, including an interview with President Gardner and CEO William J. Flynn on the company’s future.