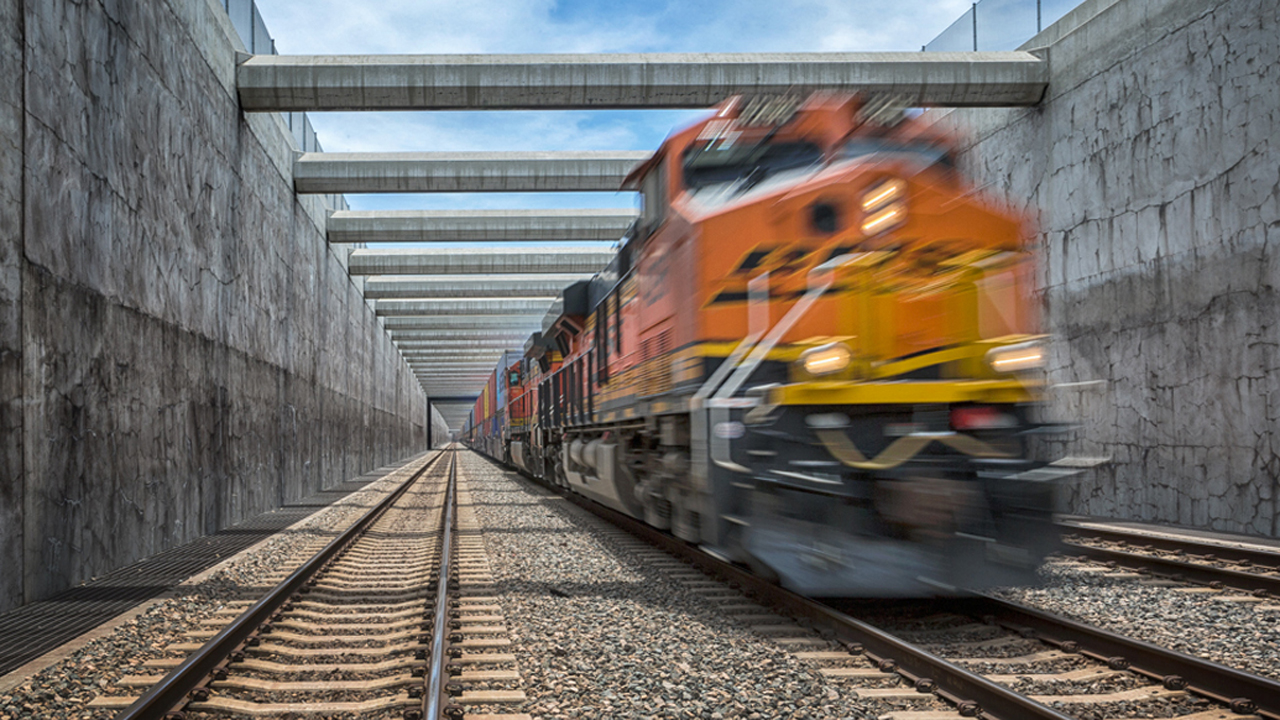 There is a great deal of confidence in the North American railway freight business model. This is because rail freight profitability is huge compared to the low returns in trucking. Rail enjoys margins close to 40% of gross revenues to operating income. While trucking unquestionably commands the largest modal freight business share, its operating profitability lags well behind railroading at a range of 8% to 12%.

Let’s focus upon the subject of productivity. Railroads very efficient when it comes to moving bulk goods. There something beyond just the magic of friction between steel wheel and steel rail. It is an engineering principle that works when commercially integrated into a better business model.

The principle of using heavier weight loadings comes down to one interesting output measure: use of heavier weight freight cars, which results in an improved net-to-tare ratio. This means using railroad freight cars that provide significantly higher on-board cargo volume, with less so-called “dead weight” (railcar tare weight). Thus a 1.9 or a 2.6 net weight-to-tare ration is relatively poor, while a 4.6 to 5.3 ratio is very good in terms of hauling efficiency.

Heavy axle loading (HAL) is important to the railroad success story. U.S. railroads first started deploying HAL about 1990. They were making a commercial decision to become much more productive by shifting to gross railcar loadings (GRL) in the 286,000-pound range (computed as the total empty car weight plus loaded cargo). It was not a random decision to become more efficient, as it was based upon a good deal of engineering research combined with economic benefits analysis.

Starting in 1988, the Association of American Railroads (AAR) initiated the original North American Heavy Axle Load Research Program. Those involved in the project tested the added track structure degradation (wear and tear) that would be a cost burden. That research looked at the changes in the life cycle because of the added weight forces acting upon the track structures (crossties, ballast, rail and fasteners). They examined the relative strengths and weaknesses of the railcar structure. They examined bridge structure impacts. Then they integrated the offset from higher-productivity elements that would follow along with the shift. That was the cost-side research.

About the same time, Zeta Tech Associates Inc. (now part of Harsco) worked with Burlington Northern Railroad (BN) to conduct a detailed series of route studies. The Zeta Tech research integrated the engineering capital expenditures and operating expense factors. In 1990, a detailed look at the benefits calculations was added. That work demonstrated to BN how it might proceed with early full-scale HAL operations on initial routes.

The key to success: The research had to go beyond just the engineering to find clear winners and losers. Some railroad operating routes would experience higher total costs. Other sectors would see clear monetized dollar savings. HAL train changes would not work everywhere. Only by “following the net money” could managers identify the way forward to a big HAL rollout.

One other change occurred that allowed the shift toward much heavier freight car loadings. After 1980, there were key advancements in steel rail technology. Those included the introduction of heat-hardened and heat-treated rails. Other advances were in rail lubrication. There were improvements made in roadbed cleaning and stabilization that also helped. However, it was rail grinding that offered a real breakthrough to support HAL. Rail grinding significantly lengthened rail life cycle, even with heavier freight car loading. That constituted a big savings.

There were some other less-noticeable changes. One was in railcar parts design. As an example, in 2003, North American railroads adopted AAR M-976, a new three-piece truck design standard for heavier 286,000-pound railcar types.

There were limitations. Only certain routes with high annual traffic density would be successfully migrated to HAL status. Bridge structures could also limit the HAL route options. Perhaps the most important enabling solution was that wherever a railroad decided to implement HAL operations, the railroad’s Chief Engineer would need an annual budget increase. Making that internal budget change is poses few problems inside a vertically integrated railroad company structure.

But it is a problem when nations decide to legally separate infrastructure from operations, as is the case across much of Europe. In an open-access railway business model, the different companies find it challenging to figure out how to negotiate the transfer of savings of one company to the pockets of other companies that may be suffering higher degradation costs. They just haven’t figured out how to re-allocate the sharing of benefits into the pockets of the managers getting hit with higher costs. It is a classic follow-the-money issue.

Over the past three decades, North American railroads have figured out the necessary business calculations. And they didn’t require government regulators to help them.

Here are a few base calculations of identifying the HAL winners and losers. With more tons per loaded HAL railcar, fewer railcars and less fuel are required to transport a given amount of freight. Plus, more net tons can be handled without increasing the number of train-miles or train crews. Operating departments save on fuel budgets and crew starts (payroll costs). Shippers or the equipment department save on the total car owned/leased costs.

The accounting magic comes when the parties can calculate how to agree on the net benefits, but note that track departments need a bigger budget. This is partially offset because the total number of railcar wheels and railcar miles (both loaded and empty) dropped with the HAL introduction. When the vertically integrated departments figure out how to allocate the benefits and liabilities, the commercial solution becomes obvious.

Overall, Zeta Tech studies suggested there could be a 25% or higher net corporate integrated benefit compared to the original cost/capital estimated operations examined. That net was after the engineering track costs increased by as much as 15% to 35% or more. For an overall societal benefit answer, here is that scorecard range as calculated by MIT’s Dr. Carl D. Martland a decade ago:

Looking forward toward 2030, what is next? Bigger freight cars might not be the next improvement. First, there is the issue of “diminishing returns.”  At some point, the car itself must be re-engineered into a stronger platform. Is that too expensive at some point? Possibly.

Or, are there manufacturers that at a reasonable incremental cost can produce stronger yet lighter net-to-tare weight ratio side frames and freight car trucks? The trick is to not make the lower tare weight part too expensive. Companies like Strato might have those materials and building skills.

Can we maintain best practices net-to-tare ratio designs by somehow reducing freight car length? Greenbrier is trying that with its new Tsunami Gate grain hopper design. This 5,185-cubic-foot design has a shorter than normal 50-foot, 6-inch length. Because of its shorter length and faster load/unload times, the railcar design offers a value proposition to reduce operating costs. Importantly, research evidence from between 1997 and 2003 showed that shorter-length, 286,000-pound railcars could provide the cost and capacity benefits of heavier cars without increasing carbody and component stresses.

About 10 to 12 years ago, North America reached the point where nearly 100% of all rail-moved coal traffic in the western U.S. shifted to moving in either a steel or an aluminum HAL freight car with 286,000 pounds of capacity, with axle loadings of about 32.5 metric tons on each axle. In contrast, standard axle loads around the world are often only 23 to 25 metric tons.

During 1991, the major North American railroads began to introduce 286,000-pound gross vehicle weight (GVW) loads in open interchange service (using bilateral railroad-to-railroad agreements). Within about 15 years of introduction across the rail network, about 40% of railcars were built to carry these loads, and all types of commodities were moved in them.

Not all traffic converted to HAL immediately. However, Western coal did. Not so in the eastern part of the United States. Only about 26% of rail intermodal used HAL railcars by about 2003. That percentage is somewhat higher today.

According to the AAR experts, here is the year 2019 North American freight car fleet as a graph showing the distribution by car age and axle load type:

What about in the rest of the world? Most other countries still use 23- to 25-metric-ton axle loads for their normal railway traffic mixes. That’s equivalent to most railway freight business practices at the end of World War II. Only in Norway and Sweden has there been an adoption of heavier freight trains—and that was limited initially to a single iron ore route connecting the two countries.

The widespread innovation of HAL trains continues to be resisted. In some locations, that is logical, since HAL freight and very fast passenger services like the TGV in France or ICE in Germany cannot coexist on the same track structure. The reasons are technical and best discussed in a separate commentary.