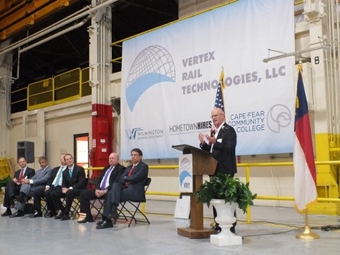 Vertex Rail Technologies LLC, a manufacturer of railroad tank cars, announced on Nov. 13, 2014 that it is opening a new plant in Wilmington, N.C., at a site that until 2011 was home to a Terex Cranes production facility.

Vertex plans to occupy the former Terex Crane facility on Raleigh Street in Wilmington, and “will make specialty tank cars designed to serve the booming U.S. energy market.” The Massachusetts-based company said it plans to invest $60 million at the site and employ more than 1,300 workers across two shifts. Positions will range from assemblers and fitters, welders, and painters to engineering, logistics, quality assurance, sales, safety, and management.

Vertex said that salaries at the site “will average approximately $40,000 annually and that its operations “will ultimately spur $1.1 billion in annual economic impact for Brunswick, Columbus, New Hanover, and Pender counties, according to an analysis by Dr. William ‘Woody’ Hall, Senior Economist at the University of North Carolina Wilmington’s Cameron School of Business.”

Vertex said it will spend the next few months refitting and equipping the former Terex Crane facility. Terex shuttered production there in 2011 due to a drop in global demand for cranes, idling 90 workers and leaving vacant more than 500,000 square feet of assembling, fabrication, and warehouse space. But the site “turned out to be ideal for Vertex,” said Vertex CEO Don Croteau. “The facility we need to build our railcars required a large building with ample height, length and width. Wilmington had the facility that made sense.”

Croteau, who has been in the industrial tank business for many years, said his company’s experience designing and producing specialty storage tanks “led us to Wilmington, where GE Nuclear was among the company’s buyers. We were already familiar with the workforce assets that were available here. We also knew there were qualified, well-trained people ready to work.”

“The arrival of Vertex Rail in Wilmington means our economic development efforts continue to provide opportunity for all,” said Wilmington Business Development (WBD) CEO Scott Satterfield. “Diversification has long been a cornerstone of our regional economic strategy, and that strategy is paying off today with the announced arrival of more than 1,000 manufacturing jobs.”

Vertex said its hiring plans “will pull skilled and semi-skilled production personnel from Brunswick, New Hanover, and Pender counties. We will work closely with Cape Fear Community College on our training needs, relying on customized workforce development programs and a pipeline of graduates from degree offerings such as its A.A.S. in welding technology.”

“This opportunity is great for Wilmington,” said Cape Fear Community College Vice President for Instructional Services Amanda Lee. Details are still being ironed out, she said. “ The college also will collaborate with Hometown Hires, a program operated by the United Way of the Cape Fear Area that connects jobless residents of Brunswick, New Hanover, and Pender counties with employment and career-development support.

Vertex said it will be eligible for customized workforce training services from Cape Fear Community College at no charge to the company or its employees, a benefit available to new and expanding industries in North Carolina. The North Carolina Department of Transportation, the State Ports Authority, and short line railraod operator Genesee & Wyoming will upgrade the rail access to the site as part of their support for economic development in the region. “We enjoyed terrific assistance from our state partners for this project,” WBD’s Satterfield said. “That includes the North Carolina Department of Commerce and the Economic Development Partnership of North Carolina.”

Croteau said Vertex “declined to apply for state, county or city financial incentives. The most important incentive has been the relentless dedication to customer service that WBD and its allies have brought to this project. We look forward to being good corporate citizens of Wilmington. Our privately held company plans to build on a tradition of generous involvement with its surrounding communities, investing and volunteering in local youth and neighborhood improvement programs, for example. We believe in taking care of our people and the communities where they live. That matters to us.”