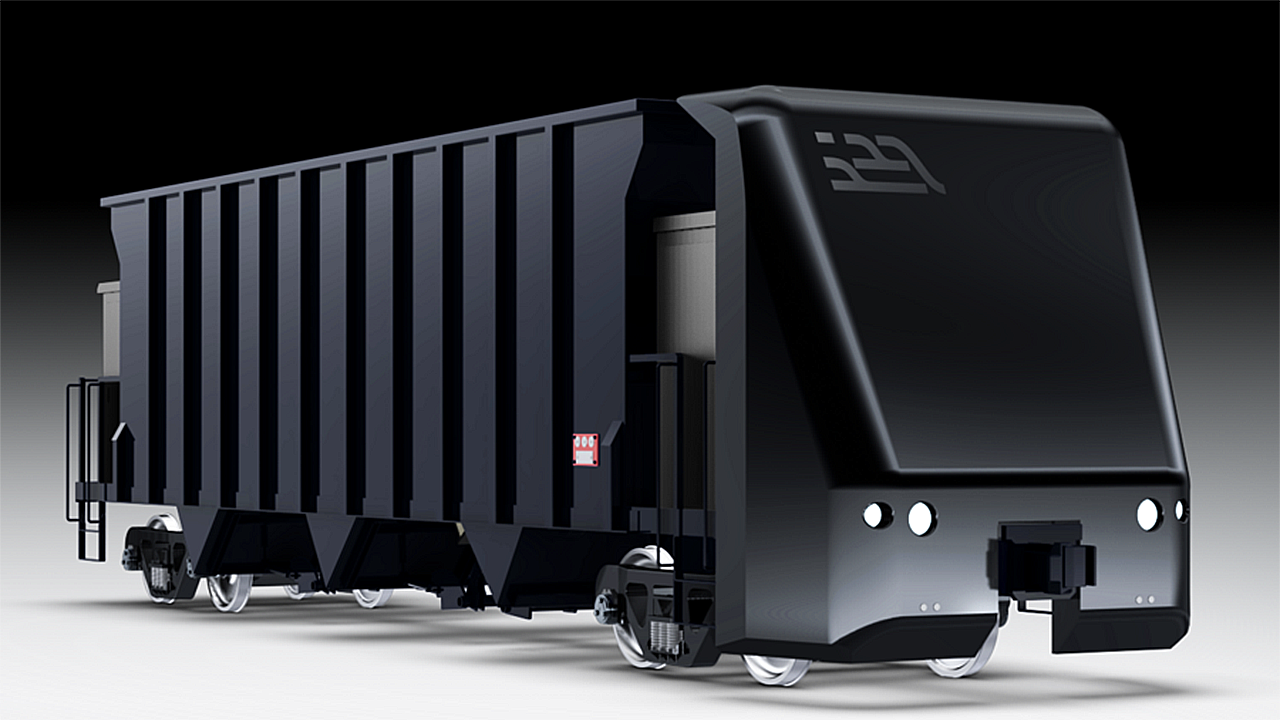 Intramotev, a St. Louis, Mo.-based technology startup, has developed an autonomous freight car that can be used in standard railroad interchange service. The vehicle, called the TugVolt, is “currently focused on short-haul routes of 600 miles or less, and designed with standard couplers and air braking that allow it to be hauled in or haul a traditional consist in addition to independent operation,” according to company Co-founder and Chief Executive Officer Timothy Luchini.

“Currently, there are two configurations, for flat car and hopper car operations,” Luchini told Railway Age. “The first applications would be for aggregate goods. As well, we are currently in talks with potential end-users who would be interested in boxcar and tank car configurations.”

The TugVolt utilizes battery-electric distributed propulsion, with up to a 600-mile range. Charging time is 15-30 minutes with rapid chargers. The intended GRL (gross rail load) is currently the industry-standard 286K, with allowances for up to 315K GRL “if the local infrastructure can support that,” Luchini noted.

Casey Cathcart, CEO of Columbus, Ohio-based Cathcart Rail (whose Belpre Industrial Parkersburg Railroad is Railway Age’s 2021 Short Line of the Year Honorable Mention), is a strategic advisor. “The initial applications will likely be captive aggregate routes between a mine and processing facility, a short haul transloading point and end user, or in-plant applications such as a steel mill,” he told Railway Age. “I envision future applications being something similar to a mixed consist being delivered under normal Class I interchange service to a short line classification yard. From there, the TugVolts independent separate and head to their various end points for loading/unloading before returning and aligning themselves in their consist again for interchange pickup. Obviously, this would require either a yard crew throwing manual turnouts or a dispatching office controlling electronic turnouts. However, there are also ideas for how the TugVolt and turnouts can interact.”

Luchini, Corey Vasel and Alex Peiffer co-founded Intramotev in 2020. Luchini and Vasel once worked for Boeing Co. Peiffer studied rail systems and logistics while earning an MBA from the University of Southern California. The startup, according to ST.LOUISINNO, is “a portfolio company of venture studio Idealab NY with funding from venture fund IdeaLabX to advance the development of its vehicle and its rail autonomy software.” In St. Louis, Intramotev has been backed by nonprofit Arch Grants, which has awarded it an equity-free $50,000 grant. The company employs 13, with the goal of completing a commercial demonstration unit in second-quarter 2022, followed by pilot testing. Luchini said the company has a letter of intent from an undisclosed customer for a $30 million TugVolt fleet.