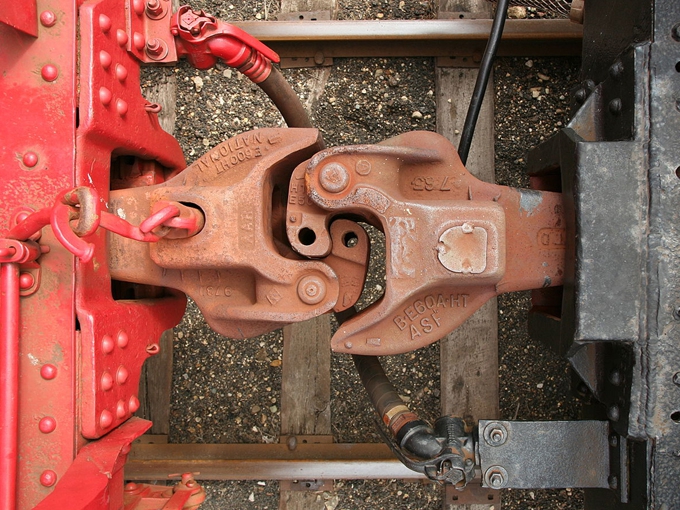 Couplers need to be the strongest link in a train, capable of withstanding extreme forces of buff (compression) and draft (expansion). Since the semi-automatic “Janney” knuckle coupler was patented in 1873 and mandated by the 1893 Safety Appliance Act, couplers, and the standards that govern them, have undergone numerous improvements and adaptations for varied types of car designs and service applications, all of which are under the auspices of the Association of American Railroads.

The Janney coupler has withstood the test of time with only minor changes. The current AAR contour dates back to the 1888 Master Car Builders Association design, which was based on the Janney patent. The Type D, adopted in 1916 by the MCBA, had interchangeable parts, simplifying maintenance. The Type E, adopted in 1930 by AAR-predecessor American Railway Association, also had interchangeable parts, though not with the Type D. It is still the most widely used design. Hazmat tank cars are equipped with Type E double-shelf couplers. The Type F is a vertically interlocking variation designed to help prevent derailments and wrecks from disconnecting couplers. There are versions with rotating shafts for rotary-dump hopper cars. The Type H is a “tight-lock” variation designed to reduce slack action and improve safety on passenger cars. It is under APTA supervision.

The interlocking contour of knuckle couplers was the first feature to be standardized. Prior to about 1910, there were many proprietary head designs and contours. By 1910, suppliers had adopted the then-standardized MCB-10 contour, soon to become the AAR-10. In the 1930s, the Type D was improved and became the Type E, though with the same contour. A few years later, the 10 contour was modified into a then-optional 10-A standard contour. The current contours, for a plain Type E, remain the AAR-10 and 10A.

All Type Es are equipped with heads of an identical basic design. All have the 10-A contour at coupler mating lines, including all external vertical faces of the knuckle and body front faces and guard arm faces. However, they can be equipped with various compatible shank designs and special fittings. For identification purposes, each design is assigned a Catalog or ID Number. Suffix letters indicate modifications to existing designs.

All Type E couplers are furnished with bodies, knuckles, and locks of quenched and tempered Grade E steel. The AAR has adopted specific-design Type Es as optional standards for certain types of service, or to suit a given car geometry. These couplers are protected in Interchange Service against improper replacement under AAR Rule 16. The AAR has also approved certain variables with special features covered by Rule 72 for replacement.

Almost all North American freight cars are equipped with Bottom Operation couplers, unless specifically ordered with Top Operation. All standard operating parts are interchangeable among Type Es or E/Fs, except when the locklift arrangement precludes a design change in locklift assemblies. Type E operating parts are designed so that they will not fit into other types of couplers, except for the C10 Knuckle Pin, used in all AAR types; the C2 Retainer Pin, used in all AAR couplers with inverted knuckle pins; and the E6A Top Locklift Assembly, used in all top operating units.

Type Fs are equipped with the F-design head end, shank and butt end. The F design has several features not available in the E and E/F, among them a frontal interlocking wing pocket and lugs that interlock with any mating interlocking coupler. These safety features help keep the couplers and derailed cars in alignment to assist in preventing cars from overturning and telescoping. A frontal bottom support shelf is standard on all Type Fs to prevent a mated, pulled-out coupler from falling onto the roadbed and becoming a hazard. Only 3/8 inches of free contour slack exists between two new F couplers, compared to 25/32 inches for two new Type Es or Type E/Fs. The result is improved train handling, and wear reduction on head surfaces resulting in extended service life, due to less vertical interface movement and free contour slack. The Type F is governed by the same AAR rules as the Type E, except for Rule 20.

Strato Inc. is relatively new to the coupler business, compared to suppliers that trace their ancestry to the late 19th century. Its MAX™ line of coupler systems, in service for about eight years, “offers double the AAR fatigue life, exceeding 1.5 million cycles.” The MAX E knuckle passed the AAR M-216 fatigue requirement standard in 2010.

Strato stresses that AAR standards “are minimum standards,” and that many customers have requirements “well beyond the minimum.” It also notes that its fatigue requirements extend beyond knuckles to coupler bodies. In 2017, the company will be expanding its product line to include double-shelf couplers with Type F style heads for tank and hopper cars.

ASF-Keystone®, a division of Amsted Rail®, manufactures a complete line of AAR-approved couplers, yokes, knuckles and articulated connectors, which as a group the company terms “energy management systems.” ASF-Keystone describes itself as a “premier manufacturer of fatigue-resistant couplers. Our standard and specialty couplers are engineered to do more than meet AAR-approved standards but push beyond them. We also provide a broad array of high-performance coupler yokes, all rigorously tested to ensure forces applied to the coupler head are dampened by the gear.” ASF-Keystone tests and proves all of its energy management systems on an impact test track “with the most demanding railcars in service. We engineer integrated end-of-car systems for effectively reducing impact stress.”

McConway & Torley, a Trinity Industries company, recently introduced the AAR-approved FR209E High Performance Rotary coupler system, which is interchangeable with the current FR207E systems and “offers an economical alternative for both new car and maintenance applications.”

From the December 2016 issue of Railway Age