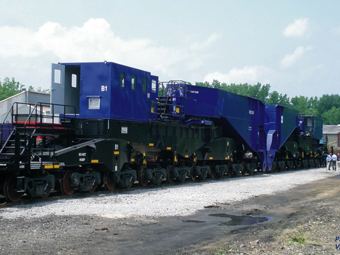 A newly manufactured Schnabel Car, WECX 801, built by Kasgro Railcar, Newcastle, Pa., is being called the “World’s Largest Railroad Car.” The 231-foot, 400-ton, 36-axle behemoth rises 18 feet above top-of-rail and has a load limit of more than 1,000 tons.

WECX 801 is Kasgro’s largest railcar to date, according to President and CEO Joe Crawford. “Normally our biggest car would be a 20-axle or 22-axle Schnabel Car,” he told WYTV News. “This is a 36-axle Schnabel Car. It’s the biggest car ever built in North America. We had to replicate all the [CEBX 800] drawings and redo them to U.S. AAR standards. We’ve been building this car for a year.” Kasgro hired 15 additional employees to construct the car.

A Schnabel Car is a specialized type of railcar designed to transport heavy and oversized loads, where the load itself becomes part of the car. The load is suspended between the two ends of the car’s two units by lifting arms; the lifting arms are connected to a pivot above an assembly of pivots and frames that carry the weight of the load and the lifting arm. When a Schnabel Car is empty, the two lifting arms are connected, and the car can usually operate at speeds up to 25 mph. The word Schnabel is from the German word “Tragschnabelwagen,” meaning “carrying-beak-wagon,” because of the tapered shape of the lifting arms, which resembles a bird’s beak.

Some Schnabel cars include hydraulic equipment that will either lift or horizontally shift the load while in transit at low speeds (no more than 15 mph) to clear obstructions along the car’s route. WECX 801 can shift up to 40 inches laterally and 44 inches vertically. Routing is determined and arranged with the railroads by the Railway Industrial Clearance Association (RICA). WECX 800, which will be owned and utilized by Westinghouse Nuclear to transport nuclear reactor containment vessels, will require an operating crew of six. It’s scheduled to enter revenue service at the port of Charleston in July

There are 31 Schnabel cars in Europe, 30 in North America, 25 in Asia, and one in Australia.

CSXT locomotive engineer Vince Skibo of Grove City, Pa., provided the photos and some of the information for this article. He notes that “the very first Schnabel Car built in the U.S., WECX 200, was also built for Westinghouse over 40 years ago. It too was built in Pennsylvania’s Shenango Valley, but at Greenville Steel Car.” The locomotive in the photo, CSX 3029, is a new GE ES44AH that CSX brought from GE’s assembly plant at Erie, Pa., especially to be displayed with WECX 801. 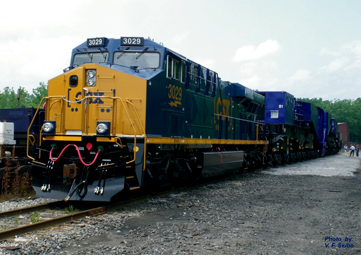 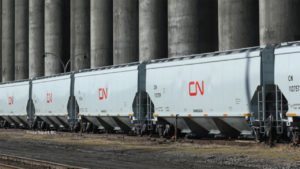