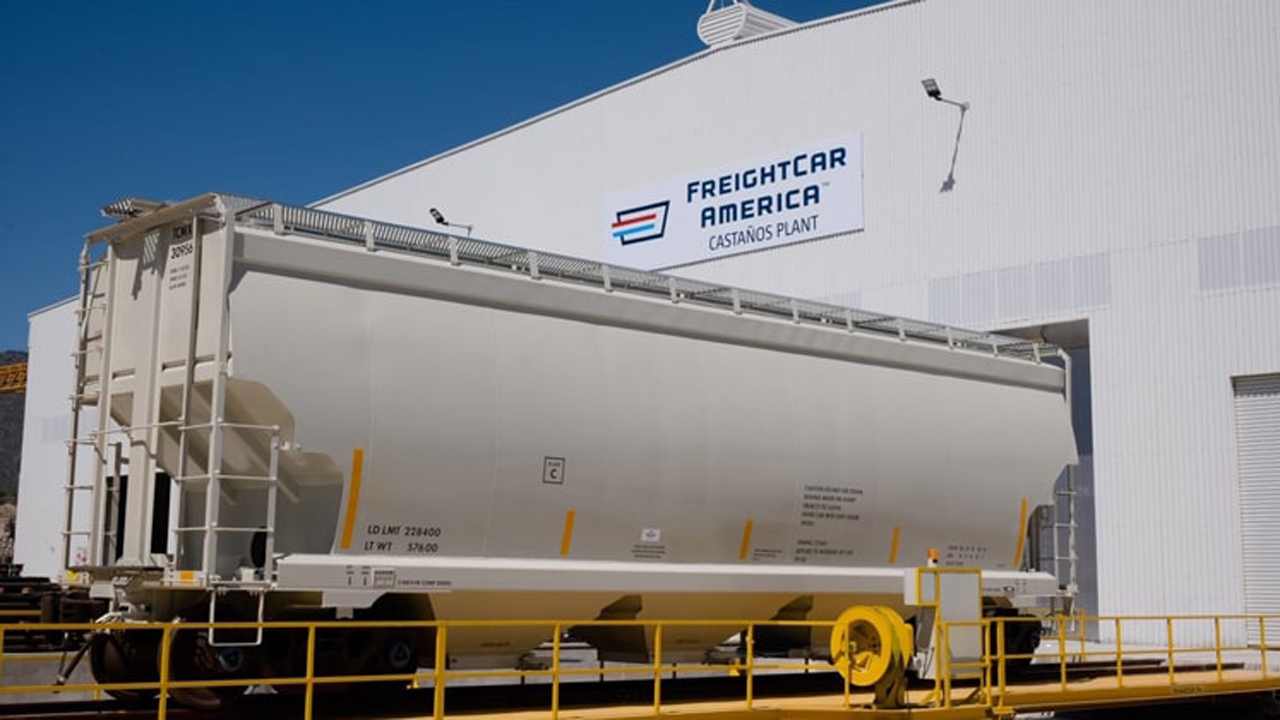 FreightCar America, Inc. (FCA) reported its fourth-quarter 2020 results on March 24, including revenue of $60.6 million, up 35% year-over-year on deliveries of 477 railcars.

Despite transitioning manufacturing from the Shoals facility in Cherokee, Ala., to a new facility in Castaños, Mexico that started shipments in fourth-quarter 2020, FCA met its revised 2020 delivery guidance of 750 railcars. Actual deliveries came in at 751, including 600 new and 151 rebuilt cars. This was down 67% from the 2,276 railcars delivered in 2019, which included 1,728 new and 548 rebuilt cars. (FCA said it completed early termination of the Shoals lease and left the facility on Feb. 28, 2021, as planned.)

President and Chief Executive Officer Jim Meyer also reported that the Board of Directors “recently approved the first expansion of the new facility, which includes a large fabrication shop and additional wheel and axle capability.”

• Both consolidated operating loss and net loss attributable to FCA included $19.0 million of non-cash impairment charges “related to leased railcars, partially offset by $12.9 million of non-cash restructuring gains, largely related to the termination of the lease at Shoals in the fourth quarter of 2020, among other items,” the according to the car builder. In fourth-quarter 2019, consolidated operating loss and net loss included a $2.0 million charge from the loss on a sale of 100 railcars previously held in the leasing fleet, a $6.6 million non-cash gain related to the termination of a postretirement benefit plan, and a net $2.0 million restructuring gain “largely attributed to a $2.4 million non-cash gain on our Roanoke, Va., facility related to the termination of the lease,” according to FCA.

• Net loss also included “a non-cash loss on change in fair market value of the warrant of $3.7 million,” FCA reported.

• Consolidated operating loss was $80.6 million, which included $18.3 million relating to restructuring and impairment charges and $19.0 million relating to impairment on leased railcars, according to the manufacturer. Consolidated operating loss for 2019 was $75.6 million, which included a net $22.4 million of restructuring and impairment charges, $7.3 million in charges from the loss on sale of railcars previously held in the leasing fleet, and a $6.6 million non-cash gain related to the termination of a post-retirement benefit plan, FCA reported.

• Inventories increased to $38.8 million from $25.1 million as of Dec. 31, 2019, “due to higher required inventory levels to support the transition from the Cherokee, Ala., facility to the new manufacturing operation in Castaños,” according to FCA.

“2020 was a transformative year for FreightCar America,” Meyer said. “We moved our manufacturing footprint to Castaños and into the newest purpose-built railcar manufacturing facility in North America and began shipping product from there in the fourth quarter. We hired a highly experienced workforce and strengthened our balance sheet to provide both growth capital and a better overall financial foundation for the business. While there were a lot of moving parts in the fourth quarter, we delivered sequential and year-over-year improvement in revenues as well as positive gross margin during the period.

“We believe that we are fundamentally transforming FreightCar America’s ability to compete and win, and are now preparing the business to pivot from restructuring to growing. Our customers are very pleased by the progress and are providing us with highly favorable feedback on the new facility and team. Lastly, even with the ongoing pandemic, we are seeing encouraging signs of stabilization in the market and possibly even the early stages of recovery. As a result, we believe we can more than double our total deliveries in 2021 and begin to scale the footprint for 2022 assuming conditions warrant.”