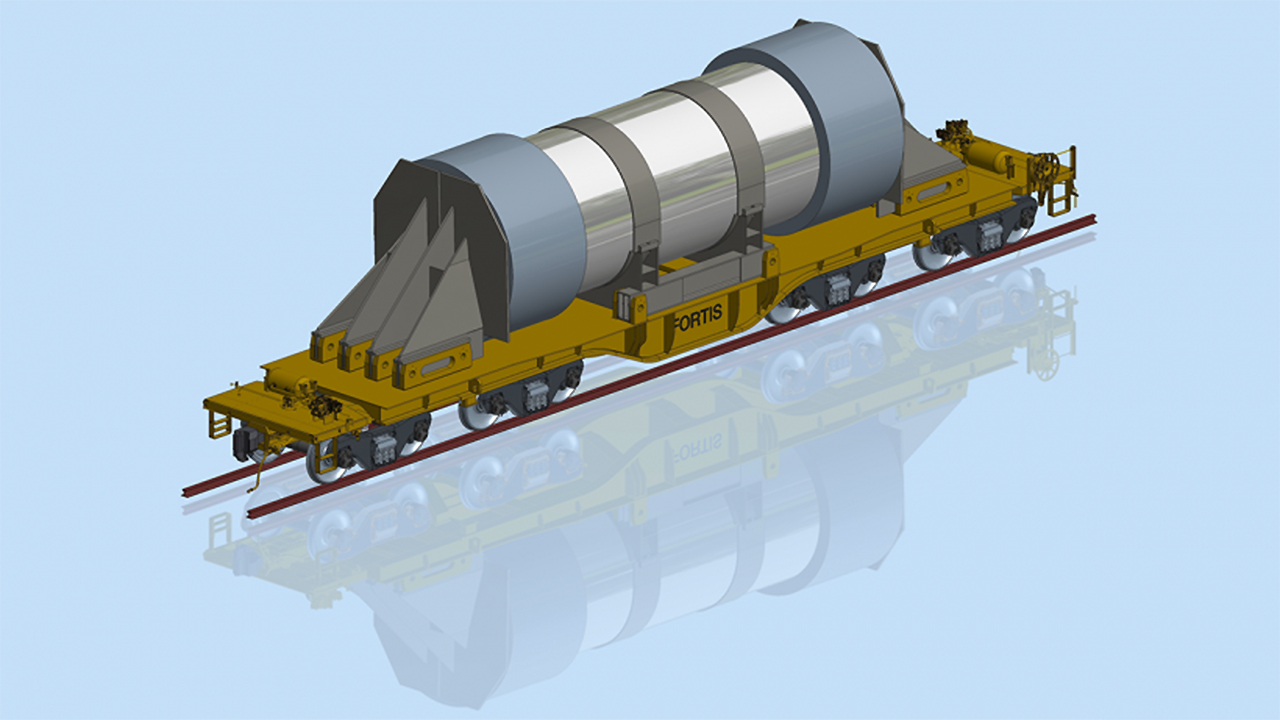 The United States Department of Energy (DOE) has awarded a contract to a consortium led by ENSCO, Inc. and including Kasgro Rail Corp., Oak Ridge Technologies LLC and RailcarCO Corp. to fabricate and test a prototype “Fortis” railcar designed to transport SNF (spent nuclear fuel) and HLW (high-level radioactive waste).

Fortis is an eight-axle, flat-deck railcar designed by Sharma and Associates, Inc. with technical support from Pacific Northwest National Laboratory. It is designed to Association of American Railroads (AAR) Standard S-2043, Performance Specification for Trains Used to Carry High-Level Radioactive Material. S-2043, AAR notes, “reduces the likelihood of derailment and thereby reduces risk” and “is the most comprehensive railcar standard published by AAR.”

In February 2021, the AAR Engineering and Equipment Committee gave the DOE the green light to begin building and testing Fortis, which is one of two specialized railcars under development by DOE that could be operational within the next few years. The other is the 12-axle Atlas. The Fortis design was completed earlier this year and received AAR approval in January 2021, allowing DOE to begin fabricating and testing the prototype

As the prototype is constructed, ENSCO will pursue conditional AAR Equipment Engineering Committee approval to use the car for the transport of SNF and HLW. Much of Fortis testing will be conducted at the Transportation Technology Center (TTC) in Pueblo, Colo., the Federal Railroad Administration’s research, testing and training facility, of which ENSCO assumed management on Oct. 1, 2022.

In addition to the prototype railcar, the ENSCO-led team will deliver all necessary testing equipment to the DOE.

“ENSCO is pleased to lead this team selected to deliver this critically important Fortis prototype to the U.S. Department of Energy,” commented Jeff Stevens, President of ENSCO, Inc. “Our team of scientists, engineers and partners will work together to construct a prototype vehicle and conduct all testing required to secure AAR approval for use of the vehicle to move radioactive materials safely and efficiently throughout the U.S.”

“DOE is working to improve performance of the rail transport system that will carry spent nuclear fuel in the future,” said Ned Larson, the federal manager for the railcar design project. “We are very pleased with the design of the eight-axle railcar that was completed and approved by AAR for a prototype.”

According to the DOE, commercial SNF is packaged in containers weighing approximately 80-210 tons, which is beyond legal weight limits for truck transport in the U.S. “Consequently, rail transport is the preferred mode to move containers to disposal and storage facilities across the country,” the agency said.