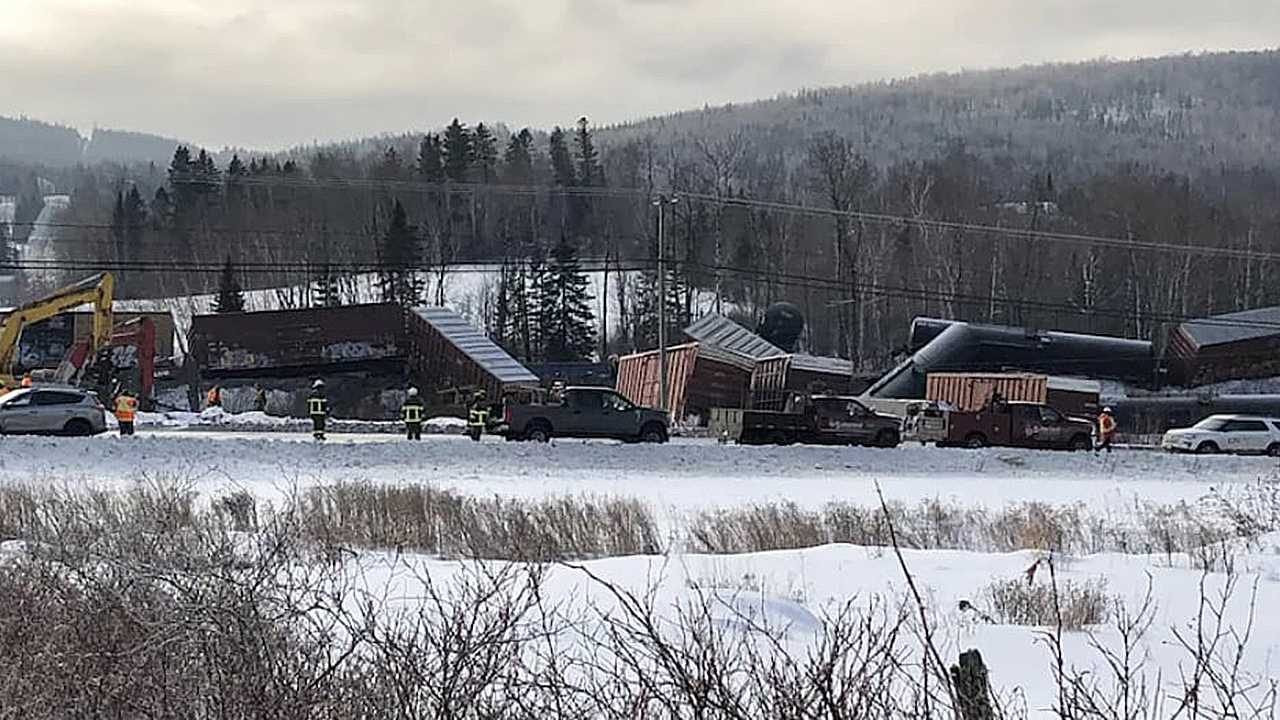 Canada’s Transportation Safety Board (TSB) has determined that a draft key (“cross key”) failure caused the Jan. 26, 2021 derailment of a CN freight train near Edmundston, N.B. TSB said investigation report R21M0002 “draws attention to the importance of reassessing the design and inspection frequency of critical rail components, such as [draft] keys, based on changes in railway operating conditions.”

The derailment of CN train M30631-25, which occurred about 13 km (8 miles) southwest of Edmundston at Mile 8.04 of the Pelletier Subdivision, involved 22 of the 171-car train. Eight of the derailed cars were LPG (liquefied petroleum gas) tank cars, three loads and five empties. There was no fire, and no injuries were reported. No LPG was released. M30631-25 consisted of three head-end locomotives , two DP (distributed power) locomotives at positions 126 and 127 in the consist, and 171 mixed freight cars. The 11,786-foot (2.23-mile)-long train weighed 17,787 tons.

TSB’s investigation (download the report below) found that the train, which was operating eastbound at 46 mph, derailed when a the 40th car in the consist, an empty boxcar, struck a coupler that had fallen from the leading (A) end of the preceding car. Cars 40 to 61 derailed. It was determined that the coupler fell after the draft key that was retaining it in place failed in service. The draft key sheared, leaving three small fragments in the yoke.

The failed draft key had developed fatigue cracks at the inside radii, “which likely occurred over its four years of service before the derailment,” TSB noted. “It is likely that the design of the specific [draft] key contributed to the initiation and propagation of the fatigue cracks.”

The investigation also identified that “there is no prescribed interval for the inspection of [draft] keys installed on railcars equipped with long-travel hydraulic end-of-car cushioning devices (EOCCDs), like those involved in this occurrence,” TSB said. “[Draft] keys generally remain in service for many years, and are only replaced when they are worn beyond set limits or develop a condemnable defect. [Draft] keys in EOCCDs are not easily accessible for inspection in the field due to the design of EOCCDs. Consequently, they are usually only inspected when work takes place on the draft assembly.”

Following the derailment, CN initiated a draft key inspection program for railcars having the same manufacturer, draft gear design and manufacturing timeframe as the car in which it was installed. Of the 604 railcars inspected, 408 were found to have a defective draft key. Additionally, the component manufacturer revised the cross-key geometry by increasing the radius in the area in which cracking had occurred in order to lower stresses and improve performance. The updated draft keys, whose design dates back to 2006, TSB said, are currently undergoing service trials.

“Train operations have changed over the past 25 years,” TSB noted. “Newer locomotives have improved dynamic braking capability and energy management systems; these locomotives, when distributed in the middle or at the end of trains, along with improved train marshalling (makeup) and handling, have allowed railways to operate longer and heavier trains. Before the mid-1990s, an average mixed-manifest train in main line service was about 5,000 feet long and weighed 6,000 to 7,000 tons. In contrast, CN mixed-manifest trains in today’s operating environment have an average length of 8,900 feet, but can be up to 12,000 feet long and can weigh as much as 18,000 tons. Long, heavy trains can generate significant buff and draft forces due to the slack action of the train. Cars equipped with EOCCDs contribute to these in-train forces due to the extended range of movement of their components. CN uses distributed locomotives with newer technologies and train marshalling in order to mitigate these in-train forces.”