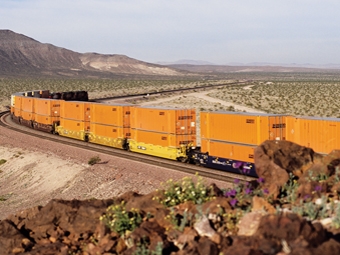 Total U.S. weekly rail traffic for the week ending Jan. 24, 2015 rose 4.1%, measured against the comparable week in 2014, according to the Association of American Railroads in its latest weekly report.

The strong advance combined a 5% rise in U.S. freight carload traffic during the week, paired with a 3% gain in U.S. intermodal volume.

Nine of the 10 carload commodity groups AAR tracks on a weekly basis posted increases compared with the same week in 2014, AAR said in releasing its data Wednesday, Jan. 28. Gaining commoditieswere lead by nonmetaillic minerals, and included coal, up 3.8%. Only miscellaneous carloads (“other”) declined during the week, and that only slightly, off 0.4%.

The lone commodity group that posted a decrease compared with the same week in 2014 was the “Other” category of miscellaneous carloads, down slightly at 0.4%.