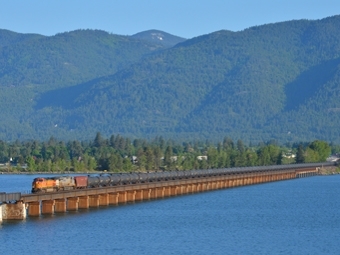 U.S. freight carload traffic for the week soared 10.2% measured against the comparable week in 2014, while U.S. intermodal notched its usual gain, up 1.1% compared with year-ago levels. Total U.S. weekly traffic recorded a 5.9% rise.

Nine of the 10 carload commodity groups AAR tracks on a weekly basis posted increases compared with the same week in 2014, led by nonmetallic minerals, up 18.4%, and petroleum and petroleum products, up 17%. Only the miscellaneous carloads category slipped for the week, down 10.7%.

Combined north American freight carload traffic for the week ending Jan. 31 on 13 reporting U.S., Canadian, and Mexican railroads was up 10.4% compared with the same week in 2014. Combined North American intermodal volume was up 6%.

“January was a good start to the year for U.S. railroads, helped by the fact that the winter so far this year hasn’t been nearly as bad as it was last year,” said AAR Senior Vice President John T. Gray. “The AAR recently estimated that U.S. railroads spent a record $27 billion on capital spending and maintenance expenses in 2014, and we’re projecting $29 billion in 2015. This massive spending is making it possible for railroads to move their customers’ freight more efficiently and reliably and steadily recover from 2014’s service issues.”