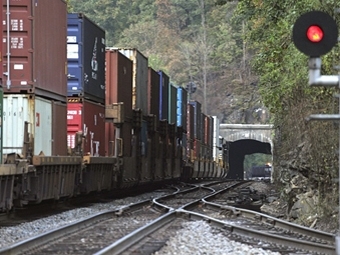 U.S. freight carload traffic rose 1.3% in the last week of August, measured against the comparable week in 2013, while U.S. intermodal volumbe advanced 5.3%. Total U.S. rail traffic for the week was up 3.1% compared with the same week last year.

Perhaps counterintuitively, just half of the 10 carload commodity groups tracked by AAR on a weekly basis posted increases compared with the same week in 2013. They included petroleum products, up 21.2%, metallic ores and metals, up 15.7%, and grain, up 12.8%.

Combined U.S. carload and intermodal volume for the month was up 3.5% compared with August 2013.

“The rail industry has played and is continuing to play a critical role in the U.S. economy’s resurgence. In fact, average weekly U.S. rail volume, in terms of carloads plus intermodal containers and trailers, was higher in August 2014 than in any month since October 2007,” said AAR Senior Vice President John T. Gray. “The broad range of commodities that are seeing higher rail volumes is a welcome sign for the economy.”