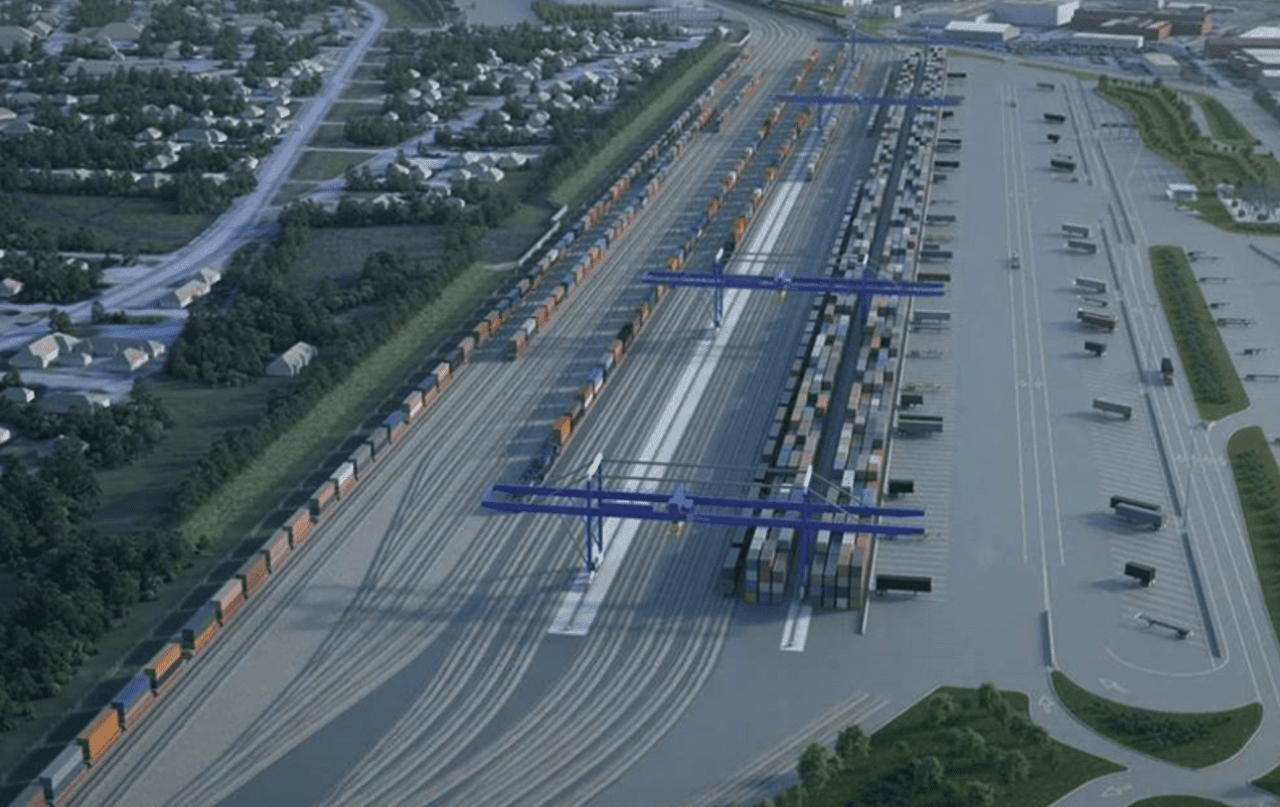 The Navy Base Intermodal Facility is set to open in July 2025. (Rendering/SCPA)

SC Ports officials and elected officials gathered on Oct. 17 in North Charleston to celebrate the groundbreaking of the rail-served Navy Base Intermodal Facility, which will provide near-dock rail and inner-harbor barge operation to the Port of Charleston to “ensure fluidity and capacity for the Southeast supply chain.”

In partnership with Palmetto Railways, Class I railroads CSX and Norfolk Southern (NS) will utilize the Navy Base Intermodal Facility, which sits about one mile from Leatherman Terminal, to further enhance rail competitiveness, SC Ports said. Nearly 80,000 feet of rail track will create a capacity of one million rail lifts in Phase 1. Containers will be moved to and from the Leatherman Terminal on a dedicated road. Inside the intermodal yard, rail-mounted gantry cranes will lead containers on and off trains.

The Navy Base Intermodal Facility, SC Ports says, will also further enhance its rail-served inland ports in Greer and Dillon.

“This resolves the last remaining competitive disadvantage we have as a major East Coast container port,” SC Ports President and CEO Barbara Melvin said. “This critical infrastructure project will greatly enhance SC Ports’ capacity, allowing imports and exports to swiftly move between the hinterland and the Port of Charleston.”

“The inner-harbor barge operation and innovative rail yard will add critical capacity to our port market,” Melvin said. “These investments will further support our customers’ supply chains and attract additional cargo to our port, supporting job creation throughout South Carolina.”

These projects, which are slated to open in July 2025, will “complement the more than $2 billion already invested in our infrastructure and operations to remain competitive as a top 10 U.S. container port,” SC Ports said.

“We are so grateful to our state leaders for their bold vision and for understanding what South Carolina’s businesses need to be successful,” Melvin said. “Because of their support, our strategic investments in critical port infrastructure will yield dividends to South Carolina for decades to come.” “South Carolina Ports is widely known as a top driver of our state’s booming economy, but that success doesn’t come overnight or by accident—it takes timely, strategic investment and innovative leadership,” Gov. McMaster said. “The latest investment in the Navy Base Intermodal Facility is the next step towards growing not only the Port of Charleston, but our state’s economy as a whole.”