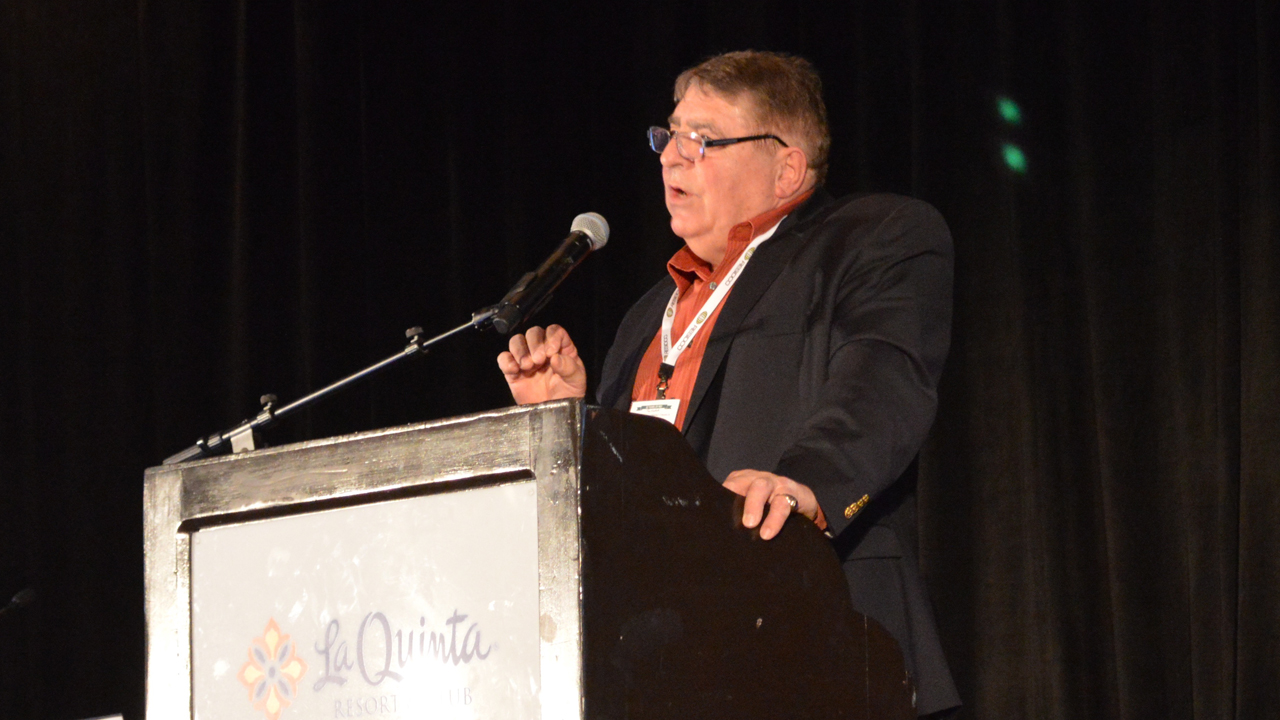 Railroad intermodal growth rates appear to have plateaued, and the ELD (Electronic Logging Device) mandate has changed some dynamics in the motor carrier market. Does this mean most low-hanging fruit has already been converted to rail, or can the railroads take advantage of the ELD disruption and capture additional market share?

Veteran railroader and industry marketing and logistics consultant Ron Sucik, principal of RSE Consulting, offered his expert analysis on March 5 at the Rail Equipment Finance 2018 conference in Palm Springs. Questions to consider: Do the railroads want this business? What is the cost of getting it? Will it require new technology and equipment, or can a minor modification of existing equipment work?

Following is a summary of Sucik’s remarks.

The year 2017 saw a 3.9% growth in intermodal in the U.S. Container traffic was up 3.5% and trailer traffic was up 7.6% over 2016. In fact, trailer traffic was in the 12% range in the closing months of the year—an unusual trailer sector surge. TOFC loadings have been declining for years, roughly at a rate of 5% to 6% and sometimes higher since the emergence of doublestack, so this may be an anomaly that bears watching.

One possible explanation is that many retailers have gone to the “Four Corner” distribution system, and traffic was more dispersed. The opening of the third set of locks in the Panama Canal, and Panamax ships now more containers, have taken another bite out of West Coast intermodal traffic. Sucik doesn’t quite buy that, as the industry has been talking about “all-water diversion” for years and has watched most of it happen.

However, traffic originating at the ports of Prince Rupert and Vancouver (British Columbia, Canada) has been a notable high-growth lane, even during the fourth quarter.

Some of Sucik’s sources suggest that truckers like J.B. Hunt, Schneider and Swift probably move less than 20% of containerized freight, excluding dimensional, flatbed and liquid. The railroads move less than 10%. That leaves more than 70% of all containerized freight movements to the rest of the trucking industry. These are the independents running trailers, and for the most part moving freight that doesn’t necessarily lend itself to hub-and-spoke movements between larger consumption centers. And their semi-trailer units are often unsuitable for doublestack cars. These truckers may indeed have already converted most of the low-hanging fruit.

Sucik’s colleague, railroad economist Jim Blaze, believes that intermodal rail is concentrated on relatively few corridors, and that almost two-thirds of the freight is in seven corridors that accounted for 62% of total fourth-quarter 2017 volume. “Intermodal rail doesn’t go everywhere. Trucks do!” he says.

There was only one double-digit growth lane in North America, Blaze notes. The west-to-east Canadian corridor led by Prince Rupert’s rapid growth expanded by 17.7%, exceeding all other rail intermodal lanes by a wide margin. “So there you have the low-hanging fruit scenario and a partial explanation of relative U.S. intermodal softness,” says Blaze.

Talk with intermodal people, some of whom have been around since before the introduction of doublestack services, include input from truckers and start playing  “What Next” or “What If” games, and you come up with some interesting scenarios.

Let’s just assume that the low-hanging fruit scenario is true. There will be occasional surges of growth, but are we seeing a trend? U.S. intermodal growth used to exceed U.S. GDP by two and sometimes three times. In the past 12 years it has only done that six times, and the most recent time in the U.S. was four years ago, to the best of Sucik’s information.

The ATA (American Trucking Associations) recently reported that its long-term outlook past 2024 predicts that rail share will not likely divert trucks from the highways, to increase rail freight market share—not even if rail intermodal growth doubles in that time frame. The truckers themselves believe that during the next decade or more, they and not rail will continue to grow market share. There’s just that much potential freight.

One obvious place could be short-haul traffic. But didn’t we do that back in the 1970s and early 1980s? Is there anyone old enough to remember seeing TOFC cars at the end of a merchandise train? Or circus-loaded trailers picked up and set out on a merchandise train?

Are there obstacles? Of course. Most trailer vans do not have lift pads and are not equipped to be lifted and loaded onto an intermodal car. They would have to be circus-loaded to prevent damage.

As heard from truckers:

“You damaged my trailers with your lift devices. Sometimes they come back with four holes in the ceiling from your container picks on the cranes. Other times you scrape or slice my side panels with the crane lift arms. I can’t afford a container fleet to take the place of my trailers.”

“I don’t have the crews, equipment or line capacity to add another train. I don’t want to be doing pickups and set-outs at intermediate terminals.”

“Why do you want to take the time and effort to move traffic with such a low profit margin? Doublestack on the longer lanes can more easily pay for terminal infrastructure costs and operations. We need to have lower operating ratios to satisfy our stockholders.”

How do you carve some of the costs out of a TOFC operation, since you can’t doublestack the traffic? For one thing, you don’t necessarily need a lift device or crane operators. You don’t need to have space allocated for chassis storage, so you have a start.

Is there any money in this? Yes, but not as much as doublestack. But remember that truck rates are on a spectacular increase—the highest in years. U.S. truckload rates posted a double-digit rise in the past 12 months. Shippers are paying as much as 17% to 25% on average more than they did a year ago. There has to be some potential profit for a rail move.

If the market above the low-hanging fruit is the trailer sector, how do you get that growth through diversion? In part, it might require an Iron Highway-type engineered rail platform, like CSX Intermodal and then Canadian Pacific tried. CSX abandoned Iron Highway, and CP will be shutting down its version, Expressway, as of June 1.

What about the European-designed swivel-platform trailer car currently in use? Obviously, the European rail environment is much different than the U.S. rail environment, but the Europeans have developed a system that works well for them. The platforms are rotated out 45 degrees; the trailers are driven up the platform and secured, and the hostler drives forward off the other side. The platforms are then rotated back into position for rail movement. This is a great system, but it’s rather expensive.

Will it take new trailer handling equipment, or is there any left to be modified to work in this system? Given that there are probably fewer than 100 pure TOFC cars left in service, it might call for new equipment. Let’s get the mechanical engineers out there working on their computers and see what they can come up with in rail platform designs. Is anyone doing that?

In summary, we are going see intermodal growth in the U.S.; we just are not sure how much. On the other hand, we know that Prince Rupert and Vancouver growth are driving Canadian intermodal numbers and will continue to do so for some time. What’s really important to remember is that there is potential to gather additional market share within that short-haul range, but keep in mind that is a completely different intermodal animal and could be quite elusive. Who is prepared to lead that growth change?