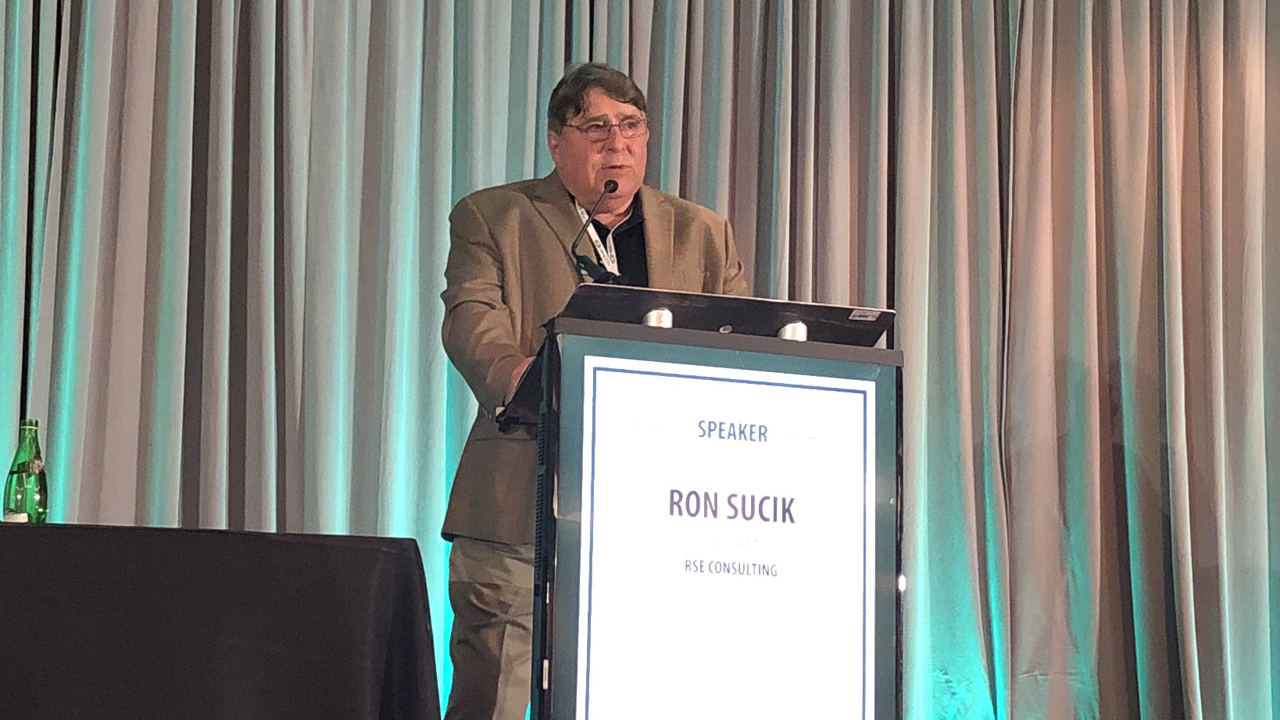 RAILWAY AGE AT RAIL EQUIPMENT FINANCE 2020, LA QUINTA, CALIF: Did anyone “get it right” on 2019 intermodal traffic? What can be said about 2020? The industry needs to understand how the events of 2019 affected traffic volumes, and then consider the uncertainties of 2020—for example, the impact of the Coronavirus on world trade—to try and forecast what will happen this year. RSE Consulting President Ron Sucik, who retired from TTX following a long and distinguished career, offered his observations at REF 2020.

One year later, at REF 2019, “we anticipated the inventory surplus created by the pre-tariff import surge to be worked off and growth continue as usual at possibly 3% to 4%,” Sucik noted. “We did not anticipate PSR adjustments to continue with reduction or withdrawal from less-profitable certain OD (Origin/Destination) lanes as railroads continued procedures to reduce their operating ratios, manufacturing shifts resulting in transportation lanes expanding to East Coast ports, and excess truck capacity competing for susceptible traffic.”

Sucik offered additional perspective by looking back to 2009 and the Great Recession, when U.S. railroads experienced one of the worst traffic downturns in history, with carloads down 17.9% and intermodal units down 16.2%. “Most impressive is how well the railroads have responded to the unprecedented falloff in traffic,” he said, citing a 2010 Norbridge report. “Costs were managed down in concert with volume declines, operating margins have been near last year’s levels. Railroads pointed to improving service performance—speed, reliability and customer satisfaction—as evidence that they were providing increased value to shippers with industry-wide improvement in railroad velocity with speed and reliability much improved. Most economists predict a gradual but slow recovery. While the railroads adjusted to a new lower level of activity, the trucking industry struggled with overcapacity and bidding wars.”

“At REF 2019, I asked, where is the next layer of fruit?”Sucik stressed. “Is part of this a market segment worth going after, or are we simply happy with our current position, since, after all, we are making money? But in the meantime, the motor carriers continue to evolve and become more competitive. Should the industry take a bold step backward and go after short-haul traffic, even if the margins aren’t as great? Is, for example, CSX going to venture into this market and make it work?

“The naysayers have had the most say. The truckers say, ‘You damage my trailers, and your service is inconsistent.’ Railroad operating departments claim there isn’t enough crew, equipment or line capacity, and that pick-ups and drop-offs are troublesome. Railroad financial departments say, ‘Why take the time and effort for low-margin traffic. Long-distance service more-easily pays for infrastructure, and we need a lower OR to satisfy investors.’”

Sucik quoted railroad economist and Railway Age Contributing Editor Jim Blaze: “In the end, it is the difficulty of rail carriers to compete effectively on price (with high earnings margins as they have in long-distance moves) that inhibits rail managers from actively seeking more short-haul intermodal movements. Success in short-haul intermodal would mathematically likely decrease the report card overall for OR and ROI performance.”

“Longer transit times to the East Coast through the Panama Canal are not an issue to larger retailers who have leveraged their buying power against the manufacturers,” Sucik quoted a large West Coast transloader as observing. “They sometimes don’t make payments until product is sold, so time can mean nothing. It’s interesting that we expected the West Coast railroads to reduce the IPI (International Pricing Index) rates to counter loss of market share to East Coast markets, but instead, one railroad commented that it was going to hold prices.”

“The Port of Los Angeles told me that its market share continues to slip as Gulf and Southeast ports gain,” Sucik said. “It believes that railroads are increasing rates to keep Wall Street happy, and this is not helping them gain business. Ocean rates are cheap to either coast, so rail will always look bad. Some volume continues to shift away from China. A cargo shift to Vietnam still comes to the West coast.  As you head toward India and farther west than Singapore, cargo can go to either coast. Y/Y growth will only be 1-2%. The Coronavirus has upset manufacturing, with 40-plus sailings canceled. Once the factories reopen, recovery will be seen, but not until May.”

“It appears that the Class I railroads are fundamentally sticking to a pricing scheme that targets highest intermodal margin and cash flow,” Sucik noted, sourcing the opinions of shippers with whom he works. “They don’t appear to be concerned with maintaining market share. Collectively, they are not lowering prices to attract customers, if the result lowers their quarterly margins.”

“Analysts generally believe that potential intermodal volume is shifting to highway due to a combination of railroad price increases and railroad company interline service reductions by several PSR philosophies,” Sucik said. “Railroads began the year with aggressive rate increases. Interpreting Larry Gross as well as other intermodal consultants, those rail intermodal rate increases backfired in part in the face of excess trucking capacity and lower truck rates. In fact, at IANA, Gross pointed out that intermodal has lost market share to trucks four quarters in a row.”

In conclusion, Sucik predicted that “intermodal year over year will be flat, with possible recovery in this year’s second half helped by low numbers through 2019. Import numbers will suffer until workers can return to factories in China in regular numbers. This may not be until some time in May. Some manufacturing has shifted, and transportation routes have changed. East Coast ports continue to gain market share. The consequence of tariffs on China could lead to the return of some manufacturing to the U.S., further reducing transportation lengths—meaning reduced demand for intermodal equipment.”