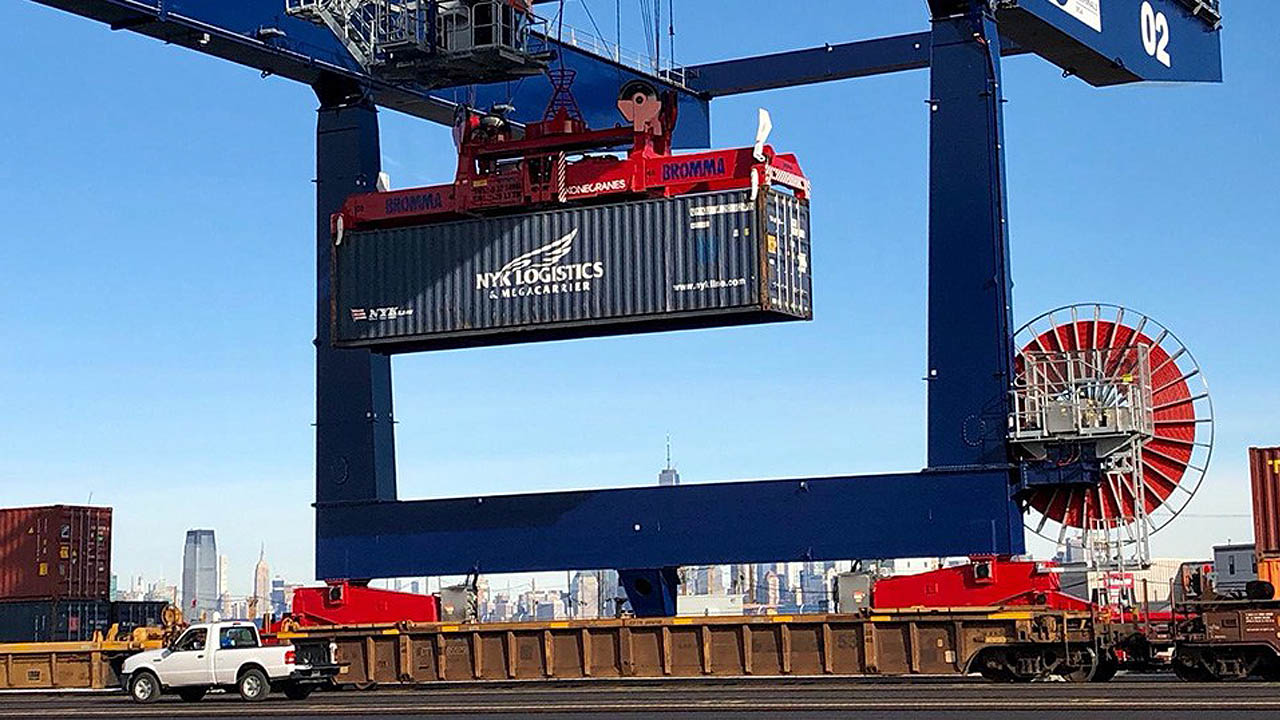 The Port of New York and New Jersey opened a major new expansion of its rail network, capping a five-year plan to expand capacity for cargo destined for outside the region.

The Port Authority of New York & New Jersey said the expansion of the portwide ExpressRail system will reduce congestion and emissions and get goods to their final destination more efficiently and at a lower cost.

The facility, with annual capacity of 250,000 lifts, will connect the GCT Bayonne terminal to CSX’s and Norfolk Southern’s extensive network, allowing shippers to efficiently and seamlessly transfer their cargo from ship to rail, and reach key inland markets in the Midwest, New England and elsewhere in a timely manner. CSX and NS work the port in part via Conrail Shared Assets Operations.

Norfolk Southern said the new service will offer shippers of 20-, 40- and 45-foot ocean containers a new alternative for moving between GCT and Chicago, Cleveland, Pittsburgh, Columbus, and Detroit.

While trucks still account for moving 85% of the containers on and off port terminals, the facilities were designed to reduce the port’s historical reliance on motor carriers to transport cargo that arrives at the port via ship to its final destination.

The opening of the final piece in the rail plan also will allow the port to advance its strategic five-year goal to handle more than 900,000 rail lifts a year, the equivalent of 1.5 million fewer truck trips traveling through local roads, which will reduce congestion and greatly enhance air quality.

“Given the highly competitive nature of the port business, we need to assure shippers that we have best-in-class infrastructure and service in place to meet growing demand and to allow cargo to be moved in a smooth, efficient, timely and environmentally friendly manner to wherever its final destination may be,” said Port Authority Chairman Kevin O’Toole. “With more than 75% of the vessels arriving in the Port of New York and New Jersey as their first call, an efficient rail cargo system can deliver cargo to an inland destination before the vessel reaches the next U.S. port, making our port a far more attractive destination for shippers. “This project, and others we are doing throughout the Port of New York and New Jersey, will ensure that we maintain our competitive edge and continue our longstanding designation as the leading port of choice on the East Coast.”

“This port is a pivotal gateway not only for goods destined for the 27 million consumers in the New York-New Jersey metropolitan area, but for the millions of others in markets within 250 miles of the port,” said Port Authority Executive Director Rick Cotton. “Expanding our ability to move cargo by rail is a smart business decision that ensures that we can continue to move cargo expeditiously through the port and do it quickly, cost efficiently and in an environmentally friendly, sustainable way.”

The initial phase of the ExpressRail Port Jersey intermodal facility, which began service Jan. 7, comprises four tracks designed for active loading and unloading of cargo from the GCT Bayonne terminal that connect to a lead track to and from the main freight rail network. A pair of high-efficiency, regenerative electric-powered, rail-mounted gantry cranes handle loading and unloading of containers in the intermodal yard. The Authority expects that by the middle of this year, the facility will be fully built out to 9,600 linear feet of an eight-track working pad, two lead tracks, as well as additional support and train storage track.

The expansion of GCT USA began in 2009, and the new rail terminal known as GCT Bayonne ExpressRail Port Jersey is the second important milestone in the project. In 2014, GCT completed the first phase that included the addition of a second berth at GCT Bayonne, featuring two super post-Panamax cranes and 20 semi-automated rail mounted gantry cranes. A Truck Appointment System was introduced in 2017 to improve yard and gate operations. “Coupled with the highest crane productivity in the harbor and now completing the ExpressRail facility in 2019, the intermodal yard provides our customers with a first port-of-call advantage for their rail cargo,” said John Atkins, president of GCT USA. “GCT Bayonne is extremely well-positioned to provide our customers superior service for both local and intermodal cargos.”

According to the Port Authority, every container moved at GCT Bayonne ExpressRail Port Jersey eliminates 1.5 truck trips, and an estimated reduction in emissions of 415 tons of nitrogen oxide and 108 tons of particulate matter over the life of the facility. It also will reduce carbon dioxide emissions by 18,300 tons annually.

While Port Authority capital funds were initially used to build the $149-million GCT Bayonne ExpressRail Port Jersey facility – the cost of the project, which included $56 million from GCT USA to build the work pads – is recoverable over time through monies collected through the Cargo Facility Charge, a fee assessed on cargo shipped through the Port of New York and New Jersey to cover the costs of critical road, rail, and security infrastructure projects.